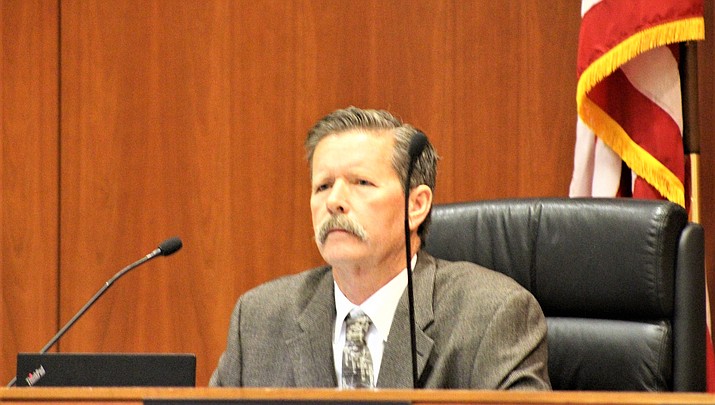 Only service animals will be allowed in Mohave County facilities with the exception of the animal shelter and the fairgrounds. (Photo by Agata Popeda/Kingman Miner)

KINGMAN – Mohave County facilities are places where people do people business, not places to be fearful of or disrupted by an animal.

That’s according to Mohave County Manager Mike Hendrix, who addressed the topic at the Board of Supervisors meeting Monday, Dec. 2.

And the Supervisors apparently were in agreement, voting unanimously to ban animals other than service animals from county facilities.

Limiting entrance into county facilities to service animals only is not a perfect solution, but it provides the county with “leverage” to deal with violators.

After a couple of incidents reported by different departments, Mohave County Risk and Emergency Management Department appealed to Supervisors to ban all but service animals from county facilities, with the exception of the animal shelter and the Mohave County Fairgrounds.

Supervisor Ron Gould of District 5 recalled that he once had a constituent show up on the third floor of the county building with a pig.

“The pig was not disruptive so I didn’t have to dismiss the pig,” he said, but expressed his concern that even with the proposed change, the county staff does not really have reliable ways of verifying if an animal is a service animal.

“That’s correct, supervisor,” said Emergency Management Coordinator Byron Steward. “According to the American with Disabilities Act, you can only ask two questions: ‘Is it a service animal?’ and ‘What task is it trained to perform?’ You can’t ask for any type of certification or identification to prove it.”

“Wouldn’t it be better just to ask people with disruptive animals to leave?” suggested Gould, pointing out that with two questions and no identification, anyone can get away with anything.

But Steward demonstrated how the county hopes to get a “bit of leverage.”

People most often claim their animal is a service animal, he said. And when you ask them what task it is trained to perform, they often answer that it’s trained to be an emotional support animal.

“That means that it is not a service animal,” Stewart told the board. “So you tell them ‘all pets are emotional support animals’ and hopefully, they will leave.”

He emphasized it’s not a big problem, but allowing unnecessary animals on county property makes the county potentially liable if something happened, such as dogs spreading allergens, a dog biting someone, or a fight between two dogs.

Hendrix supported Stewart’s reasoning, saying that the regulation will clarify the policy for employees, who at some departments were having “adoption days,” regularly bringing animals to work to be adopted. Not all employees supported the regulation.