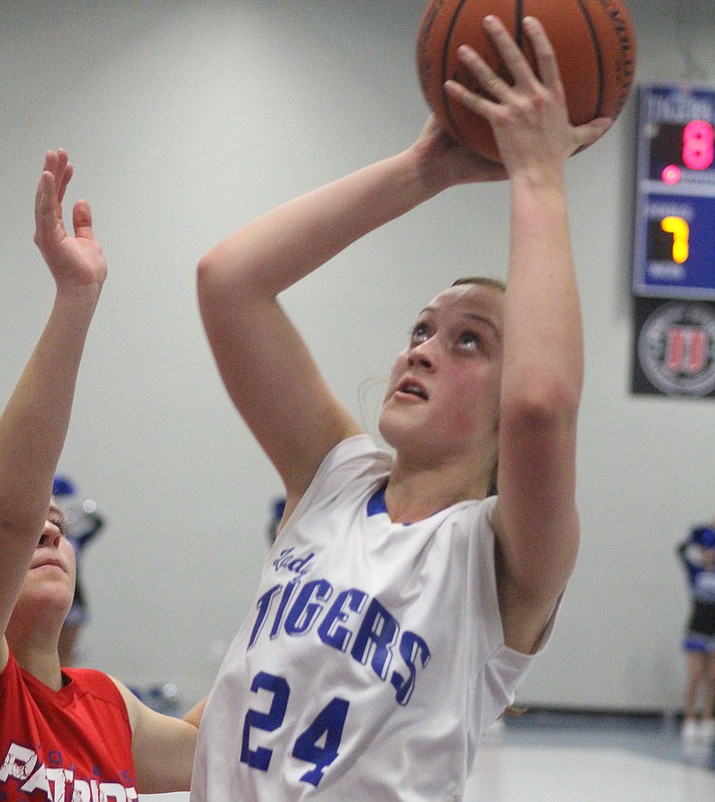 Academy sophomore Laura Allen scored six of her eight points in the fourth quarter Monday in a 40-19 win over Mohave Accelerated. (Photo by Beau Bearden/Kingman Miner)

KINGMAN – There is nothing wrong with defensive battles, but most squads enjoy seeing the offense pick up the tempo and score points. The Kingman Academy High School girls basketball team found itself in a low-scoring affair Monday, but found a rhythm in the second half for a 40-19 win over Mohave Accelerated at Betty Rowe Gymnasium.

“The girls just relaxed in the second half,” said Academy head coach Marty Edwards. “They told themselves: ‘OK, now we can play.’ A lot of JV players who were playing in the first half were scared for some reason. They came out in the second half and they did much better. And that’s the bench scoring that you see. They made their shots and figured out, ‘Hey, I can do this.’”

The Lady Tigers wasted little time in the third quarter as they went on a 9-0 run to increase their lead to 25-3 and force a Mohave Accelerated timeout. Academy’s starters accounted for that scoring spree, but the bench stepped up in the fourth quarter to clinch the victory.

“The girls came out better in the second half because of the rotation and the subs,” Edwards said.

And when the dust settled, the Lady Tigers’ bench outscored Mohave Accelerated as four athletes racked up 23 points. 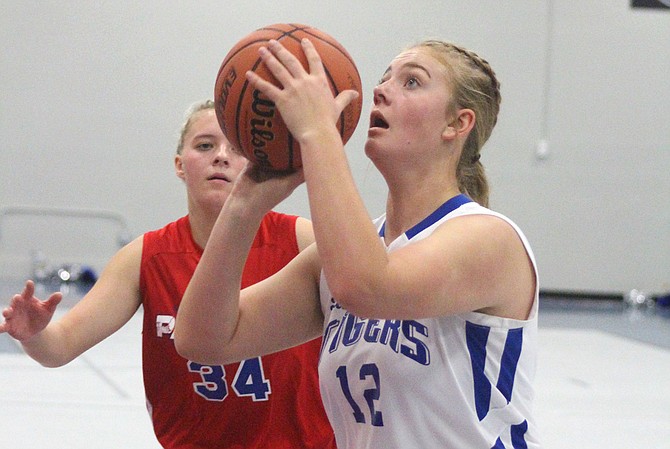 “It’s pretty even,” Edwards said of the scoring. “I like where we’re going. Everyone’s goal is to make the playoffs and we have to play a team game. That’s what I’m working on – making it a team game where everyone scores.”

But it’s not all about offense this season.

“The girls are starting to come around to how I want to play,” Edwards said. "I want to play defensive first and then everything else. It’s going to take them some time.”

Edward’s coaching style was on display in the first half as Academy’s press defense kept Mohave Accelerated in check. The Lady Patriots tallied just one point in the opening quarter as Summer Zimmerman sank a free throw with two minutes remaining.

“We pressed right at the beginning and then we got to a certain point and I pulled the press off,” Edwards said. “It does us no good. It’s better to work on our defense and work on things we can get better at.”

The Lady Tigers led 8-1 after the first quarter and increased that advantage to 16-3 at the half.

“I’m really happy with where we’re going,” Edwards said. “We’re playing well, but we just need to make more shots. We have to be better and that’s something that we’re going to work on this week – shooting drills.”

Academy (1-2) is back in action at 9 a.m. Friday when it opens the River Valley Shootout against Laughlin in Mohave Valley.