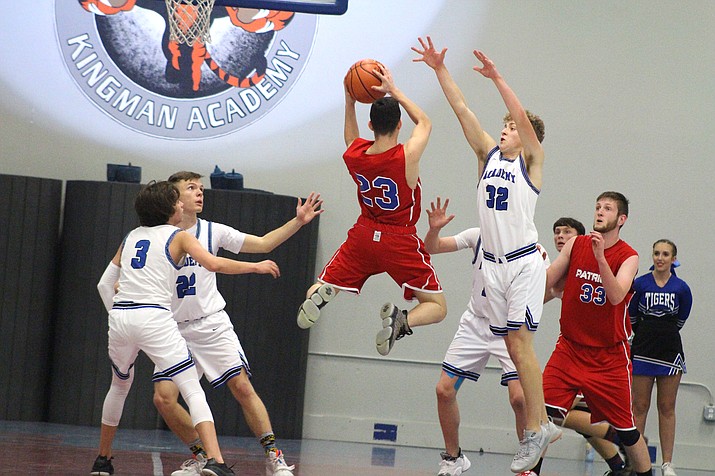 KINGMAN – It wasn't out of the question to think the Kingman Academy High School boys basketball team would experience some growing pains. The Tigers lost seven seniors from a season ago, but the new group believes in each other and proved that Monday with a 50-45 victory over Mohave Accelerated at Betty Rowe Gymnasium.

“A lot of teams and people are doubting us because we lost all those seniors,” Academy’s Connor Alleman said. “It’s tough because we lost the 3A Conference Player of the Year – Tyler (Chinyere) was amazing. But I feel like we’ll do well if we come together and gel.

"This year we’re all pretty cool with each other and we play really well," Alleman continued. "We just have to hustle because we don’t have the skill as the teams did in the past."

The Tigers showed that hustle on both sides of the ball, but there was a little fatigue as the squad had played six games Friday and Saturday at the Ben Franklin/Gilbert Christian Thanksgiving Classic in Phoenix.

“Our legs are a little tired right now and you could see that in our shots, our rebounds and our defense,” said Academy head coach William McDavid. “It was just a step slow tonight, but we have the ability to compete with anybody. And against a team like MALC who is extremely well coached, we have to give our best effort. I think we gave about 75 percent tonight.”

But the effort was good enough for Academy to notch its second win of the season, paced by a balanced attack. Alleman led the Tigers with 15 points, while Trevin Zach scored 14 and Logan Stephenson added 11 points. 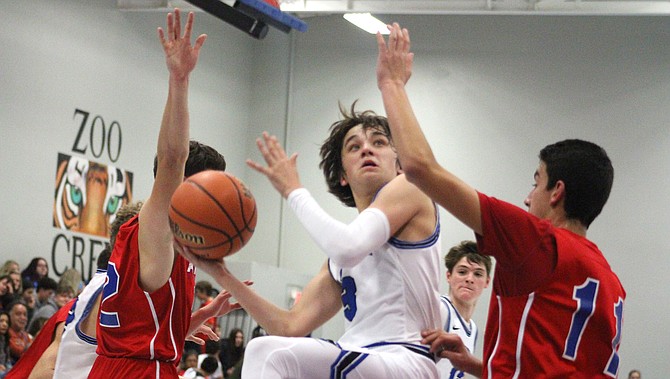 “Trevin has always been a heck of a shooter,” Alleman said. “If he keeps his confidence up the whole year, he’s really going to come into his own and surprise a lot of people. Logan and Trevin had never played on varsity. This is their third varsity game and they’re playing like they played in the past.”

The mix of youth and experience paid off down the stretch as Academy fended off a late Patriots rally. The Tigers led 42-33 after three quarters, but saw the advantage shrink to five points after Mohave Accelerated went on run.

Academy senior Ryan Hurley put a stop to the scoring spree and his teammates chipped in to clinch the victory.

“We have a lot of people who we are extremely proud of,” McDavid said. “Joey Moore had some really great minutes for us. Mike Daniel Mayo did an amazing job of handling the ball in tough situations. Even a guy like Charlie Anderson was a force for us. He’s a great quarterback and he brings us that on the basketball court, as well.”