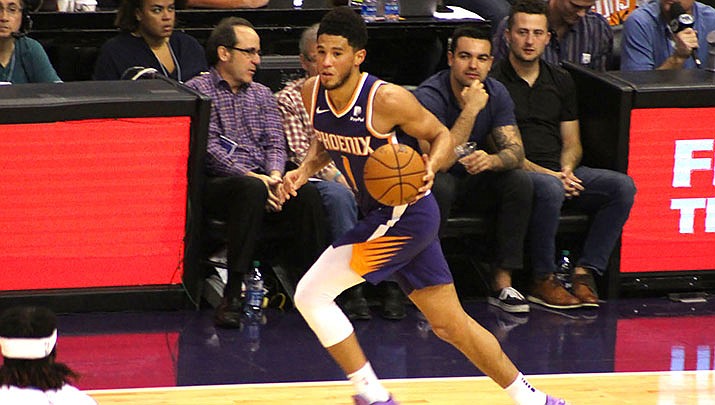 Devin Booker broke out of a perimeter-shooting slump, scoring 21 of his season-high 44 points in the third quarter Thursday night as the Suns tallied a 139-132 overtime victory over the Pelicans. (Miner file photo)

NEW ORLEANS (AP) – Monty Williams was able to celebrate a victory in an emotional return to New Orleans.

The former New Orleans coach guided the Phoenix Suns to a 139-132 overtime victory over the Pelicans on Thursday night. Devin Booker broke out of a perimeter-shooting slump, scoring 21 of his season-high 44 points in the third quarter, and Ricky Rubio powered the Phoenix Suns with four points and a critical assist in overtime.

Williams and late wife Ingrid raised five children in New Orleans and built a core of friends despite the team's mediocre results through his final season in 2014-15. When Ingrid was killed in a car wreck in 2016 in Oklahoma City, where Williams had become an assistant coach, it was Williams' friends in New Orleans who helped him cope with the loss of his spouse.

"It's a big win to come back here for the first time as a head coach and win in overtime," Williams said. "I hate those situations because I was sweating like you know what, but it was pretty cool to come back here and win. And, now, I get to go outside and see some people who really care about me."

Williams thought it might have been a pushover when the Suns led 105-85 early in the fourth quarter. But playing the back end of a back-to-back, Phoenix seemed to lose energy and the Pelicans fought back with five 3-pointers, two by the normally scatter-shooting Lonzo Ball, to tie it at 125.

The Pelicans had a chance to win in regulation, but Brandon Ingram missed a 15-foot jumper from the right baseline as time expired.

In overtime, Ingram's conventional three-point play tied it at 129, but Ricky Rubio hit a 12-footer and a scoop in the lane and then added a no-look assist to put the Suns up 135-129. Rubio finished with 15 assists.

New Orleans got to 135-132 on JJ Redick's 3-pointer with 56.5 left, but Frank Kaminsky, who had six points in the overtime, iced it with two free throws. Kaminsky finished with 20 points, and Kelly Oubre had 14 points and 15 rebounds.

"Just recently in the past three games we've been slow out of halftime," Booker said. "We made it a point at halftime that coming out we needed to be better, so I just tried to out my foot down on that, come out with energy and be aggressive, and it worked well for us."

The Suns led 74-70 at halftime and then took control by opening the third quarter on a 16-3 run.

Phoenix ends a four-game road trip at Houston on Saturday.