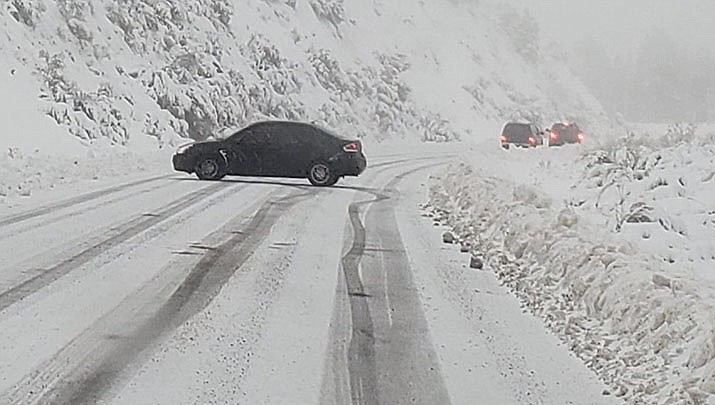 A car slides to a stop on Hualapai Mountain Road on Friday, Nov. 29. Mohave County is reviewing its road closure policies after the storm. (Photo by Amanda Kaufman) 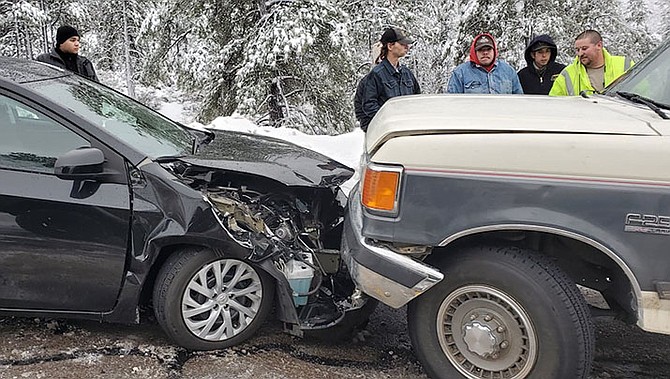 Both vehicles involved in this collision are two-wheel drive. (Photo by Amanda Kaufman)

Did Mohave County make a dangerous situation worse during the Thanksgiving storm that dumped more than a foot of snow on the Hualapai Mountains?

That’s what a long-term resident of the mountain-top community of Pine Lake thinks. Amanda Kaufman chastised the board of supervisors at their Monday, Dec. 2 meeting for failing to close certain roads and keep people properly informed and safe under difficult weather conditions.

Les Henley from Mohave County Roads Department says the department is working on a report on the storm and road conditions, but it is too early to say if they would change current emergency preparedness policies.

Henley said there were in fact barricades installed on the road, but people went around them anyway. Therefore, he said it is a law enforcement issue, not a Roads Department issue.

“That was not the case,” Kaufman said, refuting Henley’s claim that barricades were in place, and asking the county to take action. She said the storm proved that signs are not enough to keep motorists off dangerous roads.

On Thanksgiving afternoon, Thursday, Nov. 28, she said reports of swift-water rescues of people who drove into flooded washes showed that road signs stating “Do not enter when flooded” aren’t being followed.

And on Friday, Nov. 29, as the snow piled up, Kaufman said she learned that the road signs suggesting four-wheel drive vehicles and chains during inclement weather are also routinely ignored.

Kaufman described her drive up Hualapai Mountain Road that afternoon, as the snow started accumulating between mile posts four and five.

“As I came up to Lazy Y U, there was snow and ice on the roadway,” she reported. “At the point, there were the standard signs off the roadway that suggest the weather could be bad and that special equipment may be needed such as four-wheel drive or chains. It was slick and some sedans were turning around. But the traffic was very heavy. People were tailgating and passing in unsafe areas, stopping and playing in the snow.

“When I get near mileage post seven and go around that turn, the road is congested in both directions coming up and going down that pass,” she said. “A sedan comes flying from behind the downhill line of traffic at a high rate of speed passing numerous other vehicles and luckily manages to slide back into his lane and avoids hitting us. If he hit any black ice, it could have been a head-on fatality.”

When Kaufman reached Atherton Acres, traveling up, there were still no road closures or barricades, and the snow was compacted on the roadway and had become even slicker.

“When I got to mileage post 10 ... the traffic started to thin out,” she said. “People were trying to turn around and go back down the mountain. They were sliding off the road. They were sliding into oncoming traffic. They had no control of their vehicles.”

Kaufman made a trip down the mountain later that day.

Kaufman said she saw a number of a two-wheel drive sedans sliding off the roadway.

“As we approached Deer Canyon, there was a head-on accident between two two-wheel drive vehicles, a car and a pickup,” she said. “The car had lost control and crossed into oncoming traffic and hit a truck head-on. There were more than 20 cars in this area trying to make their way around this accident. The road is a sheet of ice. People are falling and one had a concussion from the fall and was vomiting.”

During her trip, Kaufman said she witnessed a Sheriff’s Office sergeant call to request that Hualapai Mountain Road be closed and barricaded. She was told by the sergeant that the request had been refused.

Henley reported the county is planning to hold an emergency meeting next week.

“We will be looking into how to consolidate effort and streamline the process,” he said, adding all the key stakeholders will be there including Roads Department, Arizona Department of Transportation, and other county officials.

Another issue Kaufman raised was the fact that the Hualapai snow disaster played out in front of one of the longest running county weather cameras, which was turned off.

“The server was down that day,” Henley admitted. “It was back [the] next Monday.”

“In fact, a lot of people were trying to use those cameras for various areas throughout the county on Friday,” Kaufman told the Supervisors. “Your Topock constituents were trying to see if County Road 1 was passable at the Sacramento Wash. The flow of information was lacking and the tools that were made available were not working – adding to the confusion.”

Even the restaurant at the Hualapai Mountain Resort was closed, Kaufman pointed out. It announced on Facebook that it was concerned about their customers’ safety.

The Supervisors promised to address the problem. Chairwoman Hildy Angius from District 2 and Supervisor Jean Bishop of District 4 thanked Kaufman for the report.

“A handful of county employees will meet next Tuesday in response to Mohave County Board of Supervisors Chairman Hildy Angius’ request for information regarding weather events and how they’re handled by the county,” confirmed Mohave County Communication Director Dave Hawkins. “It is a staff session rather than a public meeting but you can expect a report being made back to the Board of Supervisors later this month.”

‘You can’t fix stupid’: County wraps up the Nov. 27-29 snow event discussion
Miner Editorial | There’s no place like home when it snows
Road crews go into 'overdrive' during and after snowstorms
Storm frosts Hualapai Mountains with snow
Couple rescued from Hualapais as storms move in