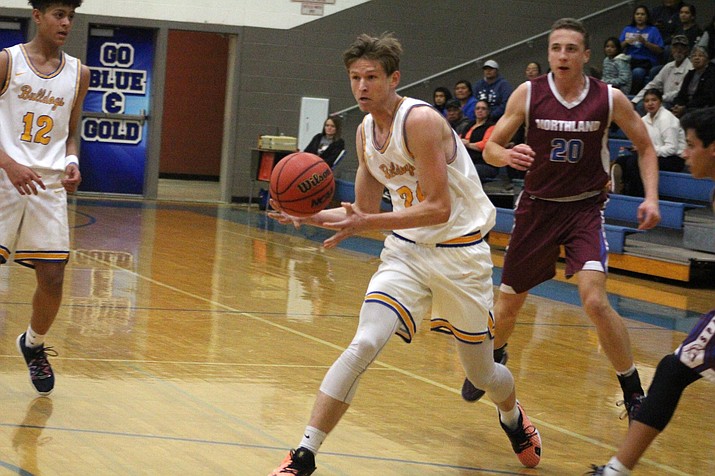 Jacob Martel tied a game-high with 20 points Thursday as the Bulldogs cruised to a 76-54 victory over Northland Prep. (Photo by Beau Bearden/Kingman Miner)

KINGMAN – It’s still early in the season, but the Kingman High School boys basketball team believes it has a special group that will go far with defense. The Bulldogs showed that Thursday as they carried the defensive intensity to the offensive side in a 76-54 victory over Northland Prep.

“We just go out there strong and give it all we got,” said Kingman senior Jacob Martel. “Everyone on the starting five contributed a lot. The bench hyped us all up and we played really strong defense.”

Martel was a big part of the successful night as he tied a game-high with 20 points and grabbed a number of boards to keep him in the running as one of the top rebounders in the nation.

“Martel has really bought into just finishing every defensive play for us with a rebound,” said Bulldogs head coach Nick Juby. “Our first shot, Northland Prep put two guys on him to block out. I told him, ‘Hey, be smart. They’re really going to block you out.’ Their coach was in Parker on Tuesday and saw him get 22 rebounds. So they really emphasized blocking him out because we go to the offensive boards really hard.”

Martel had plenty of help on offense as Gabe Imus also tallied 20 points, while Rider Havatone scored 12 and Jason Reitz added seven. And more importantly, all 11 Bulldogs in the scorebook scored.

Gabe Imus drives to the basket against a Northland Prep defender. The junior tied a game-high with 20 points. (Photo by Beau Bearden/Kingman Miner)

That mentality was on display in the second quarter as Kingman outscored Northland Prep 27-13 to put a low-scoring opening quarter in the rearview mirror. But the Bulldogs weren’t worried about the offensive production thanks to the play on the other side of the court.

“We only scored 10 in that first quarter, but we held them to five,” Juby said. “This team is going to have to hang their hat on defense a little bit. We’re doing a great job getting stops, but we just have to do a better job of not getting stops and then immediately giving it back to them so we have to get another stop. And immediately give it back to them and have to get another stop.”

Juby isn’t the only one who knows Kingman needs to stop giving the ball away, as Martel agreed the team needs to work on turnovers.

However, it’s still early in the season and the Bulldogs (2-2) have an opportunity to improve at 7 p.m. Monday with a trip to Chandler to face AZ College Prep (0-2).