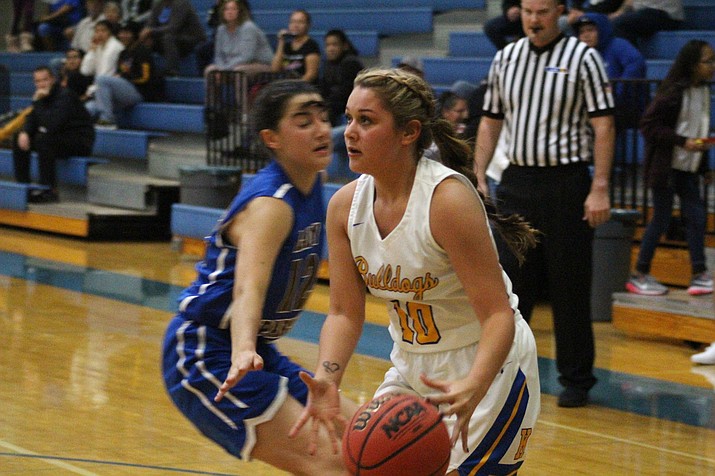 KINGMAN – When the ball is going in the hoop, keep shooting.

The Kingman High School girls basketball team followed that advice Thursday as the offense put on a show in a 58-23 win over Flagstaff’s Northland Prep Academy.

“Our big returners all got going,” said Lady Bulldogs head coach Kevin Hubbard. “Emilee Araya hit a few buckets, Star Talayumpteua hit a few buckets, Sienna Silas had a run there and Shauntel Crozier just led. I’m going to lean on those four all year and then we’re going to put a fifth person in and run with what we got. It feels good to get a win and get a little pressure off our backs on that one.”

Araya led Kingman with a game-high 15 points, highlighted by three treys. Crozier was close behind with 14 points, while Talayumpteua scored 10 and Silas chipped in nine.

But the Lady Bulldogs’ focus wasn’t on the final tally.

“I told them that I’m more concerned about improvement every game,” Hubbard said. “Throughout the season you’ll play teams that are better or worse, but the important thing with a young group is we improve every game. I told them they have to ask themselves that question after every game – ‘Did you get better?’ And I think tonight we figured some things out.”

One of those things was plugging Kadaysha Triplett into the starting lineup. Hubbard said the freshman stepped up and gave Kingman a presence that it didn’t have in previous games.

The second-year head coach also was glad to see the Lady Bulldogs continue to show dedication night in, night out.

“I couldn’t be prouder of the group and how they fight every game,” Hubbard said. “I don’t think anyone who’s come to watch would doubt how much fight this team has, but we just have raw skill. We’re learning every day. We’re doing a lot of skill work in practice and they’re improving the more they play. And that’s what I want to see.” 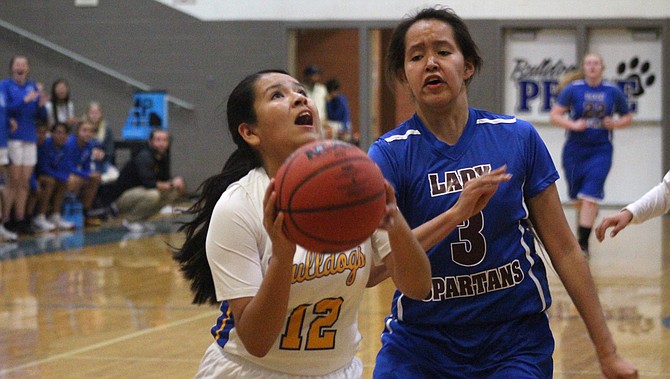 Kingman showed Hubbard plenty of good things in picking up the first win of the season, leading from start to finish after building a 20-4 advantage in the opening quarter. It was more of the same in the second half as the Lady Bulldogs outscored Northland Prep 21-3 in the third on the way to victory.

“In games like this it’s always hard because the girls want to go, they want to score,” Hubbard said. “We had to sit down in that third quarter and run through some stuff, and get better as a team so when we run into those good teams later on, we’re ready for it.”

Up next for Kingman (1-3) is a trip to Chandler to battle AZ College Prep (1-1) at 6 p.m. Monday. It will be the longest road trip of the season thus far, but the Lady Bulldogs have already battled plenty of adversity.

“We had a really tough three-game stretch,” Hubbard said. “That John Paul team we played is very good. They haven’t lost yet. Lee Williams is always a tough game and going to Parker is always tough. I knew we would have a tough three-game stretch, but I’m glad we got this one. We can improve and get better. We’ll go on the road on Monday and I’m hoping we can keep going.”