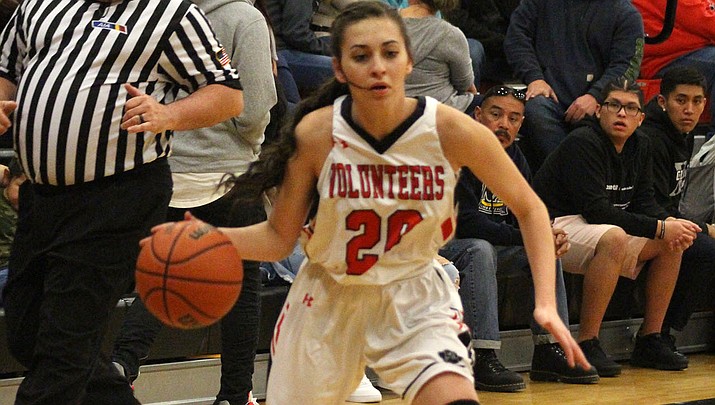 KINGMAN – It was a successful Friday for the Lee Williams High School girls basketball team.

The Lady Vols went 3-1 in pool play at the River Valley Shootout, tallying wins over Lake Havasu, Mohave Accelerated and Needles, California. The lone loss came at the hands of Pahrump, Nevada.

Hayle Davis led Lee Williams to a 25-19 victory over Lake Havasu in the first game as the senior tallied a game-high nine points.

“This was a good first-game victory,” said Lady Vols head coach Jerry Arave. “We missed a lot of easy shots, but our defense was very good and we were able to pull away at the end.”

Lee Williams kept it rolling in its next game as all 11 Lady Vols on the roster scored in a 56-9 rout of Mohave Accelerated.

“It was nice to have every player score in this game,” Arave said. “We played very hard and we were able to reward ourselves with a lot of shots inside.”

The Lady Vols offense kept it rolling in the third contest of the day as they jumped out to a 15-7 halftime lead over Needles thanks to Lucero tallying eight points. Lucero would finish with a game-high 12 points in a 32-25 victory.

Jimenez added 10 points, followed by Becca Arave with six and Davis with three.

“This was a dog fight,” coach Arave said. “Both teams played hard and really wanted to walk away with a win. It was good to see us dig deep and grind out a win.”

Lee Williams couldn’t complete the perfect day as it dropped a 38-19 setback to Pahrump in the fourth game. The Lady Vols trailed 14-9 at halftime, but couldn’t get any closer in the loss.

“We ran out of gas at the end of the first half and made a lot of turnovers,” coach Arave said. “We failed to run our offense effectively and Pahrump took advantage.”