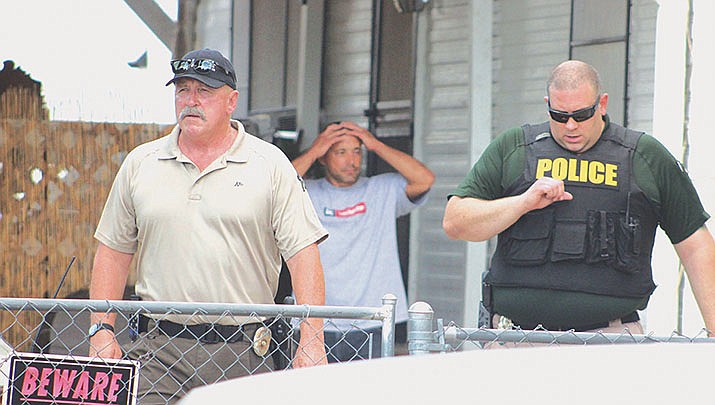 In this July 2018 file photo, Jeremiah Grant Peacey, background, watches authorities leave his property July 17. Peacey is on trial for theft for allegedly taking a suitcase with cash inside that he found at Walmart. (Daily Miner file photo)

KINGMAN – The trial of a Kingman man accused of finding and keeping a suitcase of cash at Walmart opened in Mohave County Superior Court on Tuesday, Dec. 10.

Opening statements in the theft trial of Jeremiah Grant Peacey, 40, were delivered, and while the prosecution focused on the alleged acts of the defendant, the latter’s attorney directed jurors to consider not only what they hear during the trial, but also what they don’t hear.

A woman staying in Valle Vista reported leaving the cash-filled suitcase, which she said contained about $170,000, at Walmart in Kingman on June 5, 2018. The prosecution said she took the suitcase into the store and left it on the bottom of a shopping cart, not realizing that she’d forgotten it until she returned home.

The woman had the cash-filled suitcase on her person that day because she was worried about leaving the money at home, the prosecutor said. Her worry stemmed from an occurrence which she said involved someone unscrewing the lightbulb on her front porch, in addition to people driving by her residence with their headlights off after dark.

That day, she did some shopping at another store before heading to Walmart. Upon checking out and returning to her car, the woman realized just how hot it was outside. She owned about seven cats, and was worried for their well-being in the heat. That, the prosecutor said, distracted her to the point of forgetting the suitcase was in the cart.

Minutes after, using surveillance footage, the prosecutor said law enforcement was able to see Peacey take the cart to his vehicle. Shortly after, the cart was returned to its previous location, but absent the suitcase.

Peacey was identified and contacted using the surveillance footage. As law enforcement was at his residence, the prosecution said Peacey arrived in a Jeep, the title for which he had received that day. The prosecution also said that initially, Peacey claimed to not know what law enforcement was talking about when asked about the suitcase. But he reportedly eventually said that there was close to $10,000 in the house.

The jury was told by the prosecutor that it will need to decide how much money was in the suitcase and whether Peacey made an attempt to contact the owner.

“Just because somebody left something in a parking lot doesn’t mean that the theft law the state has charged Mr. Peacey with applies,” he said.

He also said that what will be important in the case isn’t just what jurors will hear, but what they won’t hear. He urged jurors to be diligent in their notetaking.