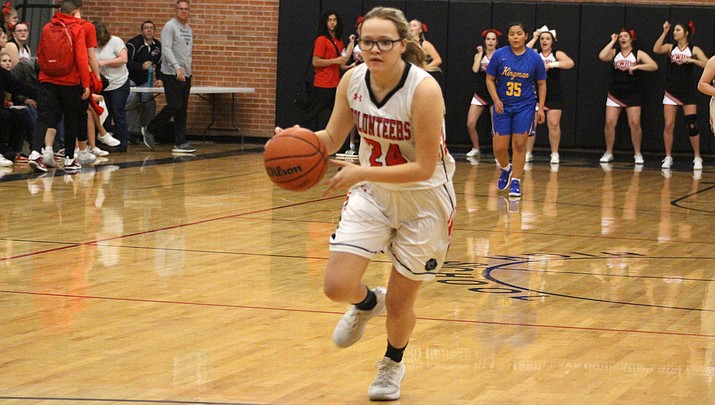 Liberty Cronk tallied a team-high 11 points Saturday in a 47-32 loss to Pahrump, Nevada in the championship game of the River Valley Shootout. (Miner file photo)

“Well, you never like to lose, but our girls played exceptional basketball over the weekend,” said Lee Williams head coach Jerry Arave. “Our defense is going to carry us. We need to understand the little things really matter – like making free throws and finishing layups. Once we do that, we will be very tough. We are a young team and we are still learning, but I am looking forward to the next couple of weeks to see what we can do.”

The Lady Vols’ defense kept the title game close after the first quarter as they trailed 8-7. However, Pahrump turned the tide in the second quarter to take a 25-13 halftime advantage.

Lee Williams’ Liberty Cronk did her best to keep her team in striking range as the senior tallied eight of her team-high 11 points in the fourth quarter, but it wasn't enough as Pahrump won the championship.

While the Lady Vols fell short in the title game, they did tally a 26-24 victory over Estrella Foothills, a squad they lost to in last season’s 4A State Tournament.

“This was a real battle,” Arave said. “Both teams wanted to win and neither would back down. Our girls just told each other there was no way they were losing and then they went out and got it done. I am very proud of them.”

Lee Williams found itself in a close battle with just over three minutes to play as it trailed by two. The charity stripe was kind to the Lady Vols, though. Hayle Davis converted three consecutive free throws to give Lee Williams a one-point lead.

The back-and-forth battle continued until freshman Becca Arave grabbed an offensive rebound and scored to give the Lady Vols a 26-24 lead they wouldn’t surrender.

Jimenez led the way with nine points, followed by Becca Arave with eight and Davis and Cronk with three each.