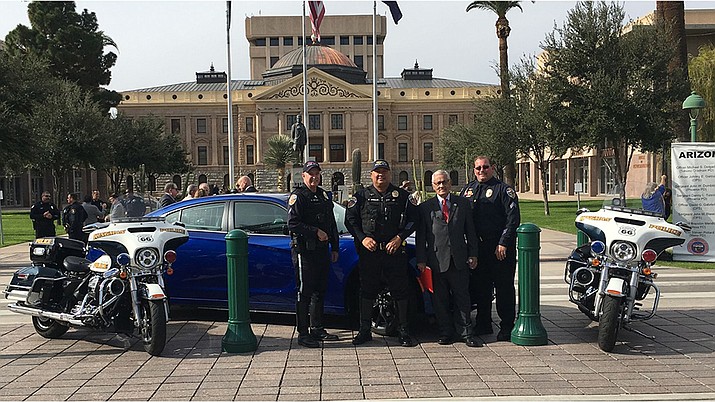 KINGMAN – The Kingman Police Department has used the $38,000 grant it was awarded from The Governor’s Office of Highway Safety to purchase a 2019 Dodge Charger.

The vehicle will be used to enhance DUI and impaired driving enforcement, in addition to selective traffic enforcement, KPD wrote in a press release. The grant covered the cost of the vehicle and the installed equipment, and will allow KPD to target impaired, aggressive, speeding and distracted drivers, as well as other various traffic violators.

“In conjunction with the Western AZ DUI Task Force, Kingman police will be out this Christmas holiday season,” the department wrote. “If you choose to drink please don’t drive. Designate a sober driver. Anyone arrested for DUI drugs or DUI alcohol will go to jail and their vehicle will be impounded.”

On top of the above ramifications, KPD notes that the average cost of a DUI offense is close to $10,000 when taking into account fines, court fees, insurance rates and more.

“The penalties for impaired driving in Arizona are severe and include mandatory jail time, thousands of dollars in fines and court fees, suspension of driving license or privilege to drive, vehicle impoundment for 30 days and other expenses,” KPD continued.

Those who choose to drink this holiday season are reminded to use a designated river, taxi or rideshare. If an impaired driver is suspected, law enforcement should be contacted.