Pistachio trees love it in Kingman, but protecting aquifer is a concern 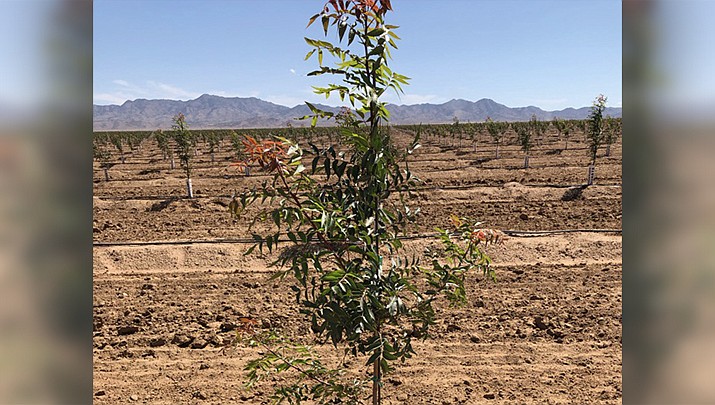 A drought-sensitive species of pistachio tree is shown on the farm operated by Peacock Nuts, LLC, east of the Kingman Airport. (Courtesy photo)

“I really appreciate your cooperation,” said the committee chairwoman Rep. Regina Cobb (R-Kingman) on Dec. 9 in Phoenix. She said the committee is willing to look at all alternatives to protect the Hualapai Valley Basin aquifer on which the Kingman population relies.

Until recently, the county and the City assumed they had a 100-year supply in the basin considered one of the largest aquifers in Arizona. But the beginning of the decade brought big industrial farming to the area and the water withdrawal skyrocketed. According to a study county officials have circulated, the water in the basin could be depleted within 55 years.

One of those farms is Peacock Nuts, LLC located east of the Kingman Airport, whose spokesperson, Kathleen Tackett-Hicks, was present at the Dec. 9 meeting in Phoenix.

“We started a year ago and planted 850 acres of pistachio trees so far,” she said. “We are planning to have 4,200 acres within the next four years. Kingman desert is ideal for pistachios, so it is a really good fit.”

Tackett-Hicks described the project as sustainability-oriented, with a recharge basin the company is already working on, and possibly a dozen other recharge zones to be developed in the future. She mentioned soil amendments and high-tech water application with ultra-low drip irrigation systems as ways to reduce water use.

“We are here for the long haul,” she said, adding she is a local resident of many years, interested in Kingman’s future and environment. Also, “the company hired local consultants, engineers, surveyors and realtors,” she pointed out.

“We changed its course,” he said. Currently, Hualapai Valley Farm steers toward growing pistachios and high-value crops that use little water like baby potatoes, onions and garlic.

While both companies and their transparency were praised by the local officials, Supervisor Gary Watson of District 1 expressed concern about the pace of water withdrawal, especially in a few years when the trees mature.

It is not known how much water the projects actually use and will use in the future. Summers said media reports on the number and size of wells is “not a relevant point of focus,” because they don’t measure water withdrawal.

But Cobb insisted that such data is relevant and useful in times when Mohave County and the City of Kingman are looking at ways to start regulating their underground water supply.

Not many tools are available, the second part of the meeting demonstrated.

In 2016, the Mohave County Board of Supervisors sent a letter to the Arizona Department of Water Resources requesting for the Hualapai Valley Basin to become an INA (Irrigation Non-expansion Area) zone.

Arizona regulates areas containing 80% of the state’s population, creating AMA (Active Management Areas) and INA zones as early as the 1980s under the Arizona Groundwater Code.

The Dec. 9 presentation by ADWR showed that a request to make the Hualapai Valley Basin an INA zone was denied in 2016 and will likely be denied in the future. Becoming a regulated zone requires significant electorate support, public hearings and precise estimates on future water consumption.

The committee will continue to work for a year and will submit its report on Dec. 31, 2020. The input will inform the Arizona Department of Water Resource’s report to Gov. Doug Ducey, the president of the state Senate and the speaker of the Arizona House of Representatives.

Top 10 Kingman, Arizona Stories of 2019 continued
In the midst of a drought, there is no stopping farmers from dipping deep into wells
Desert almond farmers are staking out water rights in Mohave County
Watson's goal: Stop proposed land swap between BLM, Rhodes
More can be done to address our water problem, it just takes more money