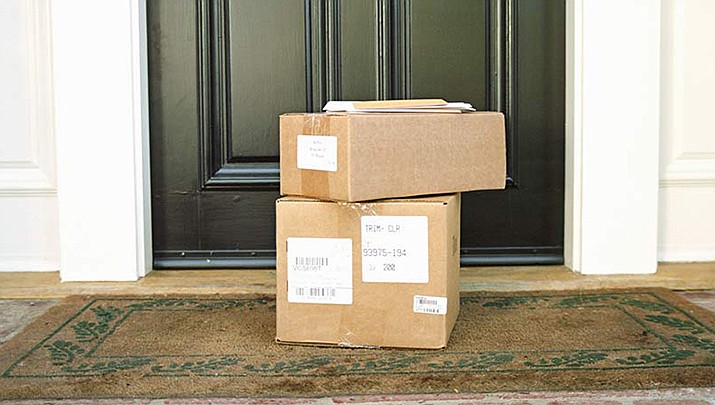 The Kingman Police Department is urging residents to take steps to keep packages from being stolen this Christmas. (Miner file photo)

KINGMAN – As last-minute gifts ordered online begin to arrive on doorsteps throughout Kingman, consumers should keep in mind that such packages don’t only look appealing to family members, but to thieves as well.

“We did get quite a few,” said Rusty Cooper, deputy chief, of last December’s package thefts, “and we are concerned about it every year. So as we roll into this holiday season, we anticipate those package thefts may increase.”

But the anticipated increase in package thefts doesn’t sit well with KPD, so the department is seeking to inform community members about how they can keep from becoming victims this holiday season.

Cooper recommends that people pay attention to their surroundings and delivery notifications, if possible. If concerned a package has been stolen by “porch pirates,” every effort should be made to track down the package as soon as the issue comes to light.

Cooper also spoke to how home surveillance systems can be of assistance to not only the residence, but to law enforcement, too.

“More and more people are going to those video solutions that tell them when a package is delivered,” he said. “It also helps us should those packages be stolen. At least we have an opportunity to identify who the suspect might be.”

Other recommendations include making arrangements, such as dropping a package over a fence, with delivery drivers with whom a personal relationship has been made. People can also ask their employers if their packages can be delivered to the office.

“Because the porch pirates are not in the spirit of the season,” Cooper said. “They do not care who they’re stealing from. These are crimes of opportunity.”

As always, KPD reminds the community to remain vigilant. “If you see something, say something,” Cooper said.

“Lower the chances of becoming a victim by taking some common sense, simple and inexpensive measures to at least prevent as best you can from being a victim of theft,” the deputy chief said.

If you suspect that a package has been stolen, contact the Kingman Police Department at 928-753-2191.