Review: Drop everything! See ‘Jumanji: The Next Level’ 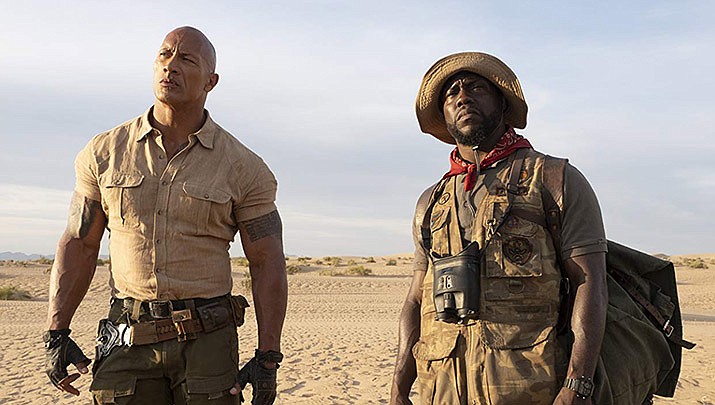 Kevin Hart and Dwayne Johnson perform in Jumanji: The Next Level

For fans of the 1995 original and the 2017 reboot, Jumanji: The Next Level (2019,) takes sequels to the next level. This near-perfect continuation is a must-see! Stop reading, run to the theater and stay for the mid-credit scene. Game of Thrones fans, there’s someone special for you, as well: 5 out of 5 Falcon Jewels.

Following the events of their first encounter with the soul-slurping game, Jumanji, the teens are now in college and living their best lives. Well, all except Spencer (Alex Wolff). He’s having problems adulting and decides to end it all by going back into the game – which the teens bashed and destroyed. He happens to do this while home on break and while his Grandpa Eddie (Danny DeVito) is visiting with his love-to-hate friend, Milo (Danny Glover) in the kitchen. Spencer also leaves his cell phone, which is indicative to any millennial that someone has obviously gone missing and that it is sprinkled with foul-play. Refusing to leave the failed adult behind, the team re-enter the game to rescue him, and find that their in-game Avatars, the villain and the difficulty of the quest have changed. The film shines in personifying the frustration of trying to explain tech to those who aren’t tech savvy or who have been gifted with years of age.

Danny DeVito and Danny Glover: “Getting old is a gift”

The Silver Screen veterans have not starred in the same film since 1997’s “Rainmaker.” Though they did not share a scene, the two held the other in high-esteem over their 300 acting credits that followed. Now in their prime at 70-something, the two bring their flare for raw, raunchy, honest comedy to Jumanji. Breathing fresh energy into the classic odd couple trope, the two Dannys set the tone and raise the bar for the cast.

Real-life friends off-screen, the unlikely pair are phenomenal as they imitate “The Dannys” and enjoy the best on-screen chemistry that movie fans could dream. Dwayne Johnson’s imitation of DeVito is riotous as the 70-something citizen relishes in his new butta-ry joints and misused power of “The Smolder.”

Kevin Hart never fails as a slapstick comedic genius and maintains character spectacularly as the “I’m getting too old for this [stuff]” Glover. The duo’s odd couple parallel performance is a heart-warming tribute to the two Dannys.

The show stopper is fledgling actress, Awkwafina, who also has a crack at channeling two characters. To say she is amazing is an understatement. Her emotional aptitude and range peek through the thready plot. Her imitation of a prominent character is almost better than the original.

The director was wise enough to give the actors carte blanche to take the story in a fun and engaging direction which led to impeccable camaraderie among the cast. Each Avatar is changed at least twice and watching the actors and actresses flip personas is like experiencing live improv; they do not miss a beat. The cinematography, costumes and incorporation of previous and new characters is perfect.

The reason that they end up in the game is a splotchy plot additive but it’s excusable to launch the epic storytelling. The pacing is whizz-fast spectacular and there are a few sections of verbose character development that pay off in the stunning, heart-wrenching end. For those who are sentimental and fuzzy-hearted, bring tissues (yours truly: guilty).

Family Audiences: 5 out of 5 Ostriches

Adventureholics: 4 out of 5 Dune Buggies

Review: 'Jumanji' sequel serves up stars, good hearted fun
'Jumanji: Welcome to The Jungle' will give plenty of snickers
Johnson steals scenes in 'Central Intelligence'
Attempting to revamp a franchise
‘Dark Phoenix’ hits on everything but plot
Event Calendar