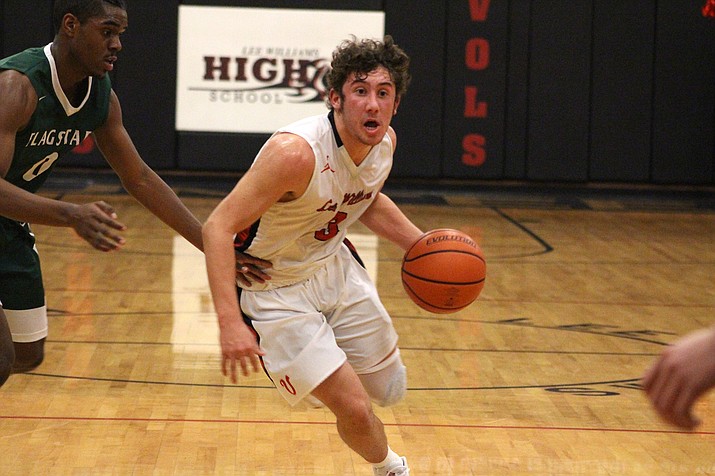 KINGMAN – There are no guarantees as to what the rest of the season holds, but one thing is for sure – the Lee Williams High School boys basketball team will lean on its defense.

The Vols proved that Friday as it overcame a slow start to shut down Flagstaff in a 41-33 win.

“Defense is something that our program has tried to make important that past four years that I’ve been coach,” said Lee Williams head coach Cain Atkinson. “In order for us to be successful, we must play solid, tough, fundamental defense. The last few games the guys have really bought in to what we are trying to accomplish and buying into their roles. Guys feel like they can trust one another now, which is important for our team to be successful.”

Lee Williams lived up to Atkinson’s words as the defensive success translated to the other end of the court. It was most evident in the second quarter when the Vols held Flagstaff to just four points, while scoring 15 for a 21-17 lead.

That pressure carried over to the second half, too, as Lee Williams outscored Flagstaff by a 24-16 margin to pick up their second consecutive region victory.

“Our defense is really stepping it up,” said Lee Williams senior Kade Juelfs. “Guys are flying around and doing their jobs. Everyone is contributing pretty well.” 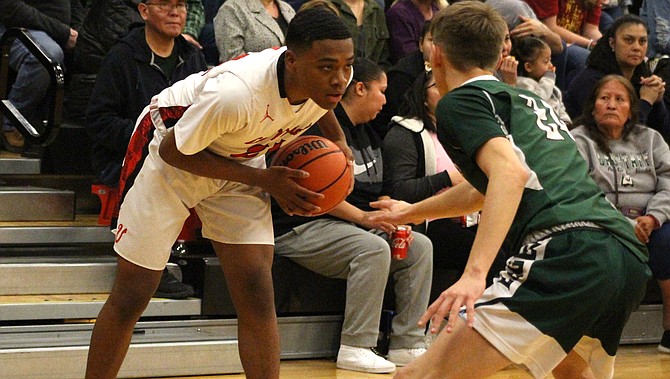 Marcell Thompson chipped in nine points in the second half Friday. (Photo by Beau Bearden/Kingman Miner)

The defense was crucial, but so was Juelfs’ offensive production. He finished with a game-high 17 points, while Marcell Thompson added nine and Jayden Hooper tallied eight.

Thompson scored all of his points in the second half and made sure Lee Williams held on for the win. Flagstaff cut its deficit to 36-31 with 1:46 left in the game, but Thompson scored his final basket to push the lead to seven points with 1:07 remaining.

“Marcell has stepped up all year,” Atkinson said. “He’s a kid that has improved dramatically in the past year. He’s been solid all season long. I’m very happy and proud of Marcell for how far he’s come.”

And while some teams may want to keep the momentum rolling, Lee Williams knows the time off will pay dividends.

“We are looking forward to this break as it gives us time to actually get in the gym and practice,” Atkinson said. “That’s something we have not done in a while. Some guys are banged up, so I think that break we will benefit from a great deal.”