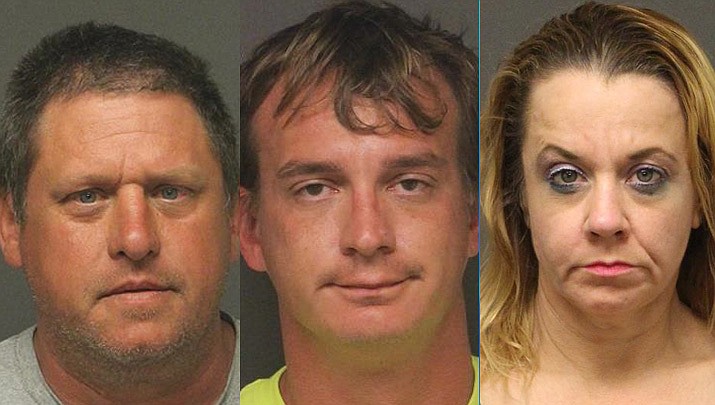 Herber was detained and a search of the purse was conducted, where deputies located a pipe, 3.9 grams of methamphetamine and a small baggie of heroin.

During the search of the vehicle, Burchett was detained and placed on the shoulder of the road, and a short time later, deputies observed a baggie containing 2.8 grams of methamphetamine lying on the rocks approximately 7 feet from where he was seated.

Deputies had searched the area prior to placing Burchett, and Burchett denied throwing any items from his possession.

All subjects were transported to the Mohave County Adult Detention Facility without incident and booked on the above charges.

Deputies observed at approximately 11:15 p.m. Thursday, Jan. 31, a sedan turn onto Ryan Avenue from Castle Rock Road and saw that the vehicle stopped in the middle of the road.

Deputies contacted the driver, identified as Segodi, who explained the vehicle was damaged and he was working on it.

At approximately 5 p.m. Thursday, Jan. 31 deputies responded to a residence in the 2800 block of McConnico Road in reference to a theft. The victim advised her neighbor, identified as Schimmel, had come to her bedroom window early that morning and began yelling and banging her fists on the glass.

She told deputies that Schimmel was intoxicated and attempted to reach inside the partially open window.

Later that morning, the victim was working in her garage when Schimmel allegedly entered the garage and punched the victim in the right eye. The victim gained control of Schimmel and escorted her back to her residence.

Later that afternoon, the victim was working in her yard and left her the keys to her vehicle and her cellphone inside the residence. When the victim went back into her house she noticed those items were missing and a mobile search revealed the phone was at Schimmel’s residence.

Deputies attempted to contact Schimmel at her residence and heard a female voice yelling from the back yard. Deputies saw a verbal altercation between Schimmel and a male subject taking place. It appeared to deputies that Schimmel was intoxicated.

A records check revealed Schimmel had an active arrest warrant and she was detained. Schimmel denied the accusations, however, she purportedly turned over the phone and keys to the deputy.

Schimmel was arrested and booked into Mohave County Adult Detention Facility without incident. 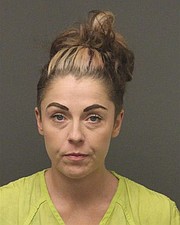 At approximately 5:45 p.m. Monday, Jan. 28 in Fort Mohave, deputies responded to a business in the 5200 block of Highway 95 in reference to a shoplifting in progress.

A records check revealed the active warrant and a search of Bond’s purse revealed the unpaid items. Bond had been trespassed from the business prior to this incident.

Deputies arrived at about 2:30 p.m. Friday, Jan. 25 to a residence in the 3600 block of Chino Drive on a call of suspicious activity. The reporting party told law enforcement she had been inside her home when she heard a loud noise.

She observed two men, one on the ground and another on her roof, when she walked out her front door to see what the ruckus. One of the men, later identified as Parks, told the reporting party she had water damage to her roof.

According to MCSO, the reporting party observed that the men had taken shingles off of her roof. Parks reportedly told her the shingles were blowing all over the property, and then gave her a business card for services to fix the roof.

Law enforcement made contact with Parks by phone, and he said he was working in the area when he saw the damage to the roof and contacted the woman at the property to offer to repair the damage. Parks denied being on the roof or removing the shingles.

Stewart Parks was arrested for first-degree criminal trespassing and criminal damage, both felonies. He was booked into Mohave County Adult Detention Facility without incident. 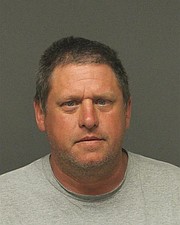 At approximately 12:45 p.m. Saturday, Jan. 26, deputies were traveling west on Highway 95 when they observed a red SUV make an improper U-turn in the 2800 block of Maricopa Avenue.

The deputy also observed a motorcycle had been traveling west on Maricopa Avenue at the time of the U-turn, and the motorcycle’s driver had to fully active his brakes and swerve into oncoming traffic to avoid colliding with the SUV.

Deputies arrived on scene and made contact with the SUV’s driver, identified as Sankey, and could smell the odor of an intoxicating beverage coming from his breath. 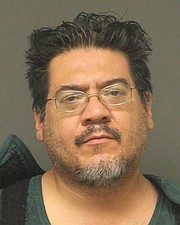 At about noon Friday, detectives were contacted about a possible molestation. The child alleged that Rodriguez touched her inappropriately and that he also asked her to touch him inappropriately. Interviews were conducted with involved parties, and Rodriguez denied the allegations.

Armando Rodriguez was arrested for sexual conduct with a minor and molestation of a child, both felonies, and booked into Mohave County jail.

At approximately 8 p.m. Wednesday, Jan. 23, deputies responded to a residence in the 4800 block of S Castilla Drive in reference to a contempt of court.

The victim reported Howard was at the residence knocking on the door and there was an active Order of Protection in place against Howard.

Upon arrival, deputies observed Howard on the front porch of the residence and placed him into custody.

At about 10:45 a.m. Wednesday, Jan. 23, deputies responded to a residence in the 2400 block of Highway 66 to assist Department of Corrections parole officers with a compliance check.

The officers located a trailer on the property and made contact with the male and female subjects located inside, later identified as Atwood and Dowling.

Parole officers told sheriff’s deputies that they had located methamphetamine while searching the trailer. Deputies then observed a purse on the floor of the trailer, and could see a baggie containing a “white crystalline substance” on top of the purse. That substance tested positive for 0.7 grams of methamphetamine.

Upon searching the purse further, deputies reportedly discovered 3.9 grams of heroin and drug paraphernalia. Atwood and Dowling denied knowing that the drugs were in the purse.