Mohave County History | A brief history of Palo Christi Elementary
Palo Christi is back in the limelight, but just what makes this historic school so important to Kingman? 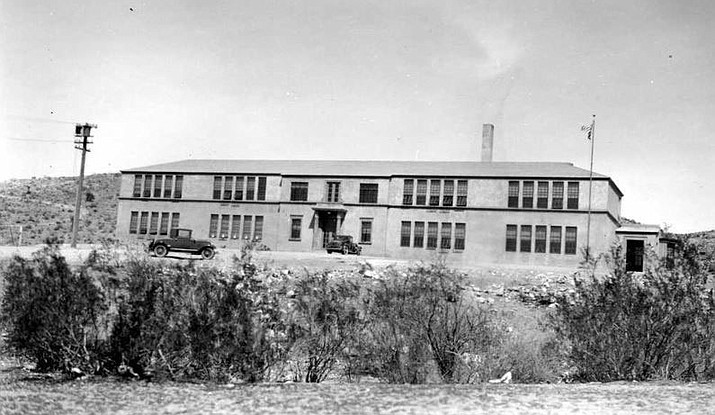 Two trucks can be seen in front of the nearly completed Kingman Grammar School around 1928. (Photo courtesy Mohave Museum of History and Arts)

Four boys at Palo Christi School, Kingman. No date was listed. They are just some of the hundreds, if not thousands, of students who passed through Palo Christi’s halls. (Photo provided by Mohave Museum of History and Arts)

Palo Christi currently sits empty, only the echoes of the past haunt its halls. For nearly a century, it was host to children’s laughter and learning. The halls were flooded with students, and their learning took them outside to its trails.

While it is deeply embedded in Kingman’s history, there did exist a time before Palo Christi when it was just a hill.

“It was just a hill full of rocks,” said Nell Hand, a former grammar school teacher. “They carried away tons and tons of dirt. You never in your life saw so much dirt carried away.”

And after the dust settled, there stood the new elementary school. It didn’t have a name, or at least not a distinct one. In January 1929 it was simply known as Kingman Grammar School.

The Kingman Grammar School enrollment district stretched from downtown Kingman and Golden Valley to “north of the freeway at the country club” to the Peacock Mountain interchange. A total district of 36 miles, 18 miles to the east and west of the new school. “Situated on a hill an excellent view may be had from its many high windows, which overlook practically the entire town of Kingman,” wrote a staff member of the Mohave County Miner on Jan. 11, 1929.

When it opened, there were 11 classrooms, and the one everyone was excited about: the kindergarten room.

“Of the 11 modern and complete classrooms, the one probably drawing the most comment was the kindergarten, which is truly a work of art” the Mohave County Miner reported. “Situated as it is in the extreme east wing of the building, it is accessible to the sunlight for the entire morning, the only time the room is in use.”

The room had special supervision of the school’s architect, John S. Mulligan Jr., of Lesher and Mahoney, and the general contractor, Bert Pierson. Both said the kindergarten room was “as near perfect as anything in the entire state” at the time.

“From the miniature stage that has been constructed at one end of the room to the art stone, electric fireplace at the other, the room is as complete and modern as any in the big cities,” the report continued. “Nothing has been left undone by either the architects or the contractors that would give the room a cheerful and home-like atmosphere.”

The praise toward one room shows the care that the community had toward this new school.

But it wasn’t over yet for the Kingman Grammar School.

March 11, 1929 they began work on an auditorium. This $11,419 addition was complete in June of that same year and was “one of the first auditoriums in the state,” according to the Mohave County Miner. This auditorium could seat over 400 people, and housed a 41-feet wide stage as well as a 12-feet tall arch.

This auditorium was home to many dances, plays and musicals throughout the 1920s and ‘30s.

This new school remained the Kingman Grammar School until 1963. With the creation of Manzanita and La Senita to ease the burden placed on one elementary school, the name was officially changed to Palo Christi.

And Palo Christi it has remained into the 21st century.

“Mohave County should indeed be proud of its new school and in turn compliment the splendid work that has been accomplished,” wrote the Mohave County Miner in 1929.

And that pride should still be a part of Mohave County and Kingman. Palo Christi is a part of our history, one that is recognized by the state as a National Historical Site. It is vital something is done to preserve this piece of history and restore it to the heights for which it was praised in 1929.

While the 90th anniversary has just passed, hopefully there will be an auditorium full of children who can celebrate the historic building’s 100th anniversary.