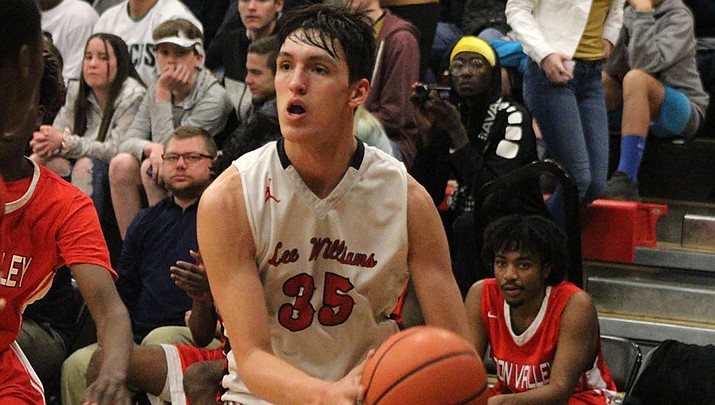 The countless hours of hard work and dedication were for one common goal – the 4A State Championship.

Unfortunately, the Lee Williams High School boys basketball team won’t get that opportunity after falling to Moon Valley 55-46 in the 4A Conference Play-In Tournament.

“We knew that they were going to fight hard because we were both fighting for something very big,” senior A.J. Herrera said. “We had some mistakes that killed us and that’s kind of what it comes down to.”

The No. 16 seed Vols needed to have a great night against an athletic opponent, but just couldn’t avoid miscues and the 17th-seeded Rockets took advantage.

“I felt like we turned the ball over a whole heck of a lot and we missed a lot of free throws,” said Vols head coach Cain Atkinson. “You’re not going to win many games by doing both of those things. We knew that they were going to come out and try to turn us over quite a bit and they did a very good job.”

Despite the turnovers, Lee Williams still had a shot to come away with a victory. The Vols proved that by opening the second half on a 10-0 run for a 29-24 lead.

It appeared the momentum was shifting in the favor of the Vols, but Moon Valley kept itself in the game.

What hurt even more was Lee Williams scoring just one point in the final 4:50. Herrera sank a 3-pointer at that point to give the Vols a 45-42 advantage, but the offense went quiet after that basket.

“It’s tough when another team is playing really good defense,” Herrera said. “We tried – everyone gave it their all. But sometimes the ball just doesn’t go in. It’s basketball. We kept shooting, but if it’s not going in – you can’t really do anything about it.”

Herrera did his best to help out with a team-high 17 points, while Aaron Santos scored 14 and Diego Narvarte chipped in seven points.

“I cannot ask for anything better,” Herrera said. “These guys – I love them. These guys are legit my brothers until the day I die. Every single one of them is amazing. I’m grateful for my last year to have these guys as my teammates. Next year, tune in for them.”

The Vols finish the 2018-19 season at 14-4 and will look to replace five seniors in Herrera, Santos, Narvarte, Cody Ferrin and Marcus Watkins.