Prep Basketball: Lady Bulldogs advance in 3A State Tournament with win over Academy 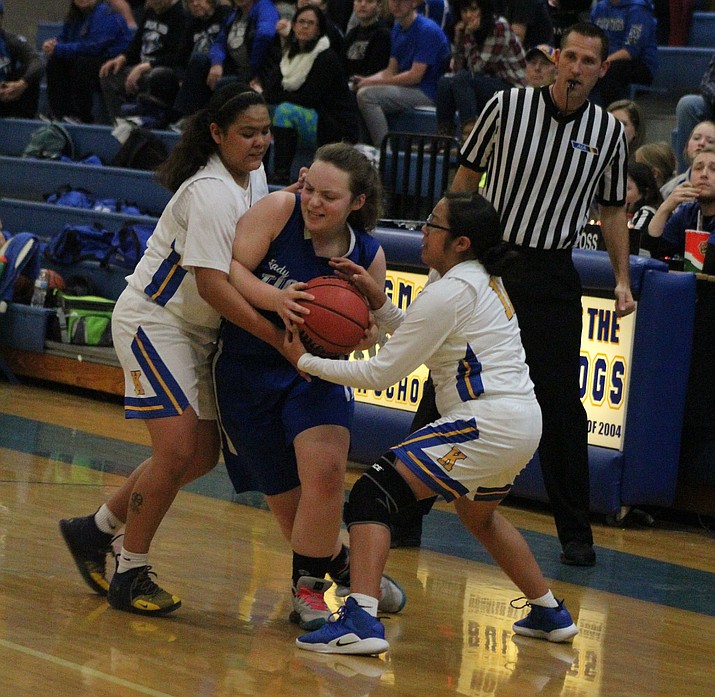 Kingman's Star Talayumpteua, left, and Sienna Silas try to steal the ball from Kingman Academy's Emily McCracken Tuesday night in the first round of the 3A State Championship. The Lady Bulldogs won 63-46 to advance to a second round contest against Tuba City at 6:30 p.m. Friday. (Photo by Beau Bearden/Daily Miner)

KINGMAN – It’s no secret that senior leadership is important for any squad that wants to win games at state. But when the other role players step up, it’s nearly impossible to stop. 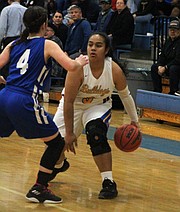 Kearra Tauta scored 16 points Tuesday night as the Lady Bulldogs advanced to the second round of the 3A State Championship. (Photo by Beau Bearden/Daily Miner)

That was the case Tuesday night as the Kingman High School girls basketball team leaned on everyone in a 63-46 victory over Kingman Academy in the first round of the 3A State Championship at KHS.

“We worked as a team through the whole game,” said Lady Bulldogs freshman Shauntel Crozier. “We kept passing the ball and communication was big.”

Crozier was an instrumental part of that success as she tallied 15 of her game-high 20 points in the second half.

And the first half was greatly in favor of the Lady Bulldogs, especially the second quarter as they outscored Academy by a 26-7 margin to take a 36-16 halftime lead.

“We gave them too many opportunities in the second quarter,” said Lady Tigers head coach Garth Steed. “I think we had 10 turnovers. I told them in the beginning they are way too good of a team to trade four-point swings. And they made us pay for it.”

Academy was down 20 points at half and could have thrown in the towel, but the Lady Tigers didn’t go down without a fight.

“Credit the Academy for coming out in the third quarter and playing as well as they did after taking that – that’s hard to come back from,” Hubbard said of the 26-point second quarter. “They kept going with us all night to keep it at 20 points.”

Ashlee Steed led the way with 15 points in her final game for the Lady Tigers, while Emily McCracken tallied 13 points and Faith Edwards scored six.

“I told the girls tonight, ‘There’s nothing to hang your heads about,’” coach Steed said. “We’ve come a long way. We’ve played great as a team. We ran into a tough team to play the last two games. But it was a great season. We have a lot to build on for next year and I’m excited about the future.”

And as the Lady Tigers close the book on this season, No. 10 seed Kingman shifts its focus to the second round of the 3A State Championship.

The Lady Bulldogs make the trip to Coconino High School at 6:30 p.m. Friday to face No. 7 seed Tuba City.

“Hopefully we carry that momentum, that teamwork into what will be a very rough, loud, tough environment against Tuba City over in Coconino,” Hubbard said. “They’re going to bring fans and it’s going to be loud. It’s going to be an experience we haven’t had yet. It’s going to be a challenge, but I think if we play like that, we’ll be okay.”