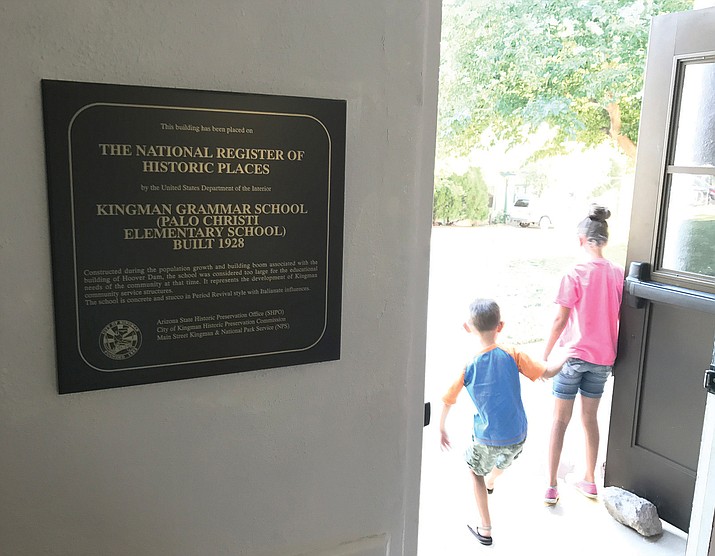 Photos inside and out of Palo Christi Elementary School show the potential for it to become a central city complex.

A brief history of Palo Christi Elementary: Thank you Claire. Memories are golden. Long may our old school be with us.

Recycling in Kingman: I worked for a major recycler in Vegas and we tried to accept plastics and cardboards. We gave up because we had to take it all to L.A and that was not cost effective.

GOP wants deal, hopes Trump will sign it: Trump is impulsive? Since when? He has stated from day one what he wants and has obtained nearly all his promises including jobs, deregulation, dumping Iran deal, moving embassy to Jerusalem, No. 1 in oil now. His speech was brilliant.

KMS taking steps beyond it’s “F” grade: With a favorable report from the ADE and only two parents in attendance for the meeting, it appears some of the blame should be placed on those parents that have failed to be concerned with their child’s education.

Easy recycling, not: I have been recycling until now. Because easy recycling recommends people waste precious water to wash food that contaminates recycling, or not to use pizza or donut boxes, mine will now just go directly to the landfill as before recycling.

Tobacco tax could increase by $1.50: As far as I’m concerned, for health, I’d rather see them banned. Let’s see what happens in Hawaii. Yes I’m a former 3 pack-a-day smoker that now hates them.

Recalls: The incorrect signature numbers is just another way of the City protecting its own. Recall Miles, too, revamp the City’s Admin/Legal departments, too. Apologize to the people that you accused of stealing and sued. Step up and be “pro Kingman.”

Ducey, and taxes for education: Teachers deserve every penny they get. Teachers are responsible for educating children. They put up with attitudes from some students as well as parents, and are never thanked. Maybe you should sit in a classroom and see for yourself.