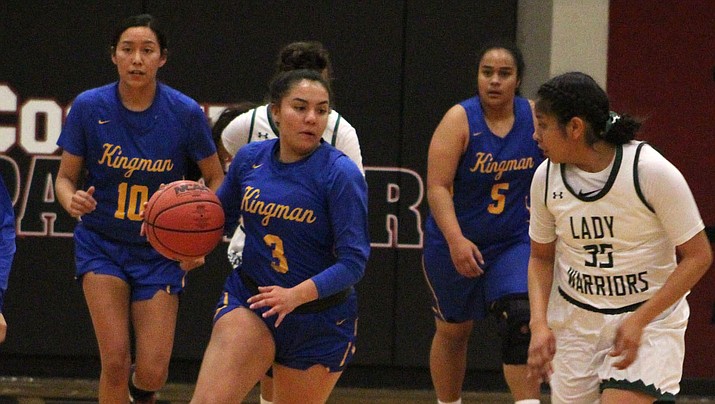 From left, Payton Chamberlain, Sukwana Quasula and Kearra Tauta played their final game for Kingman High Friday night in the second round of the 3A State Championship. (Photo by Beau Bearden/Daily Miner)

FLAGSTAFF – At some point, all good things must come to an end.

But that doesn’t mean it’s an easy pill to swallow, especially after all the Kingman High School girls basketball team accomplished during the 2018-19 campaign – a 16 game-winning streak in the regular season, a perfect 10-0 mark in region play and, most importantly, a 3A West Region championship. 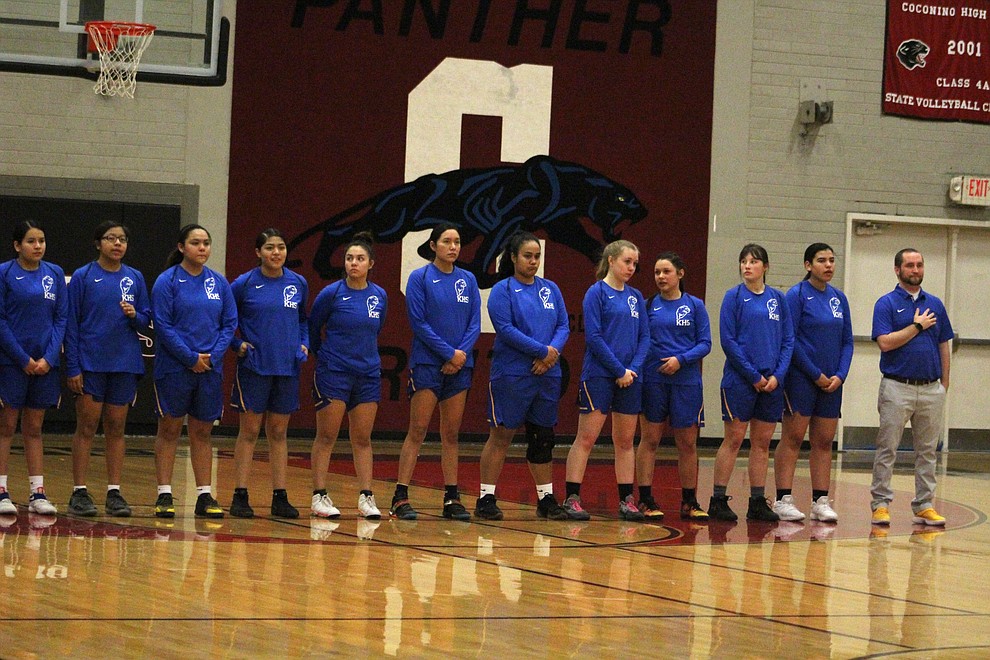 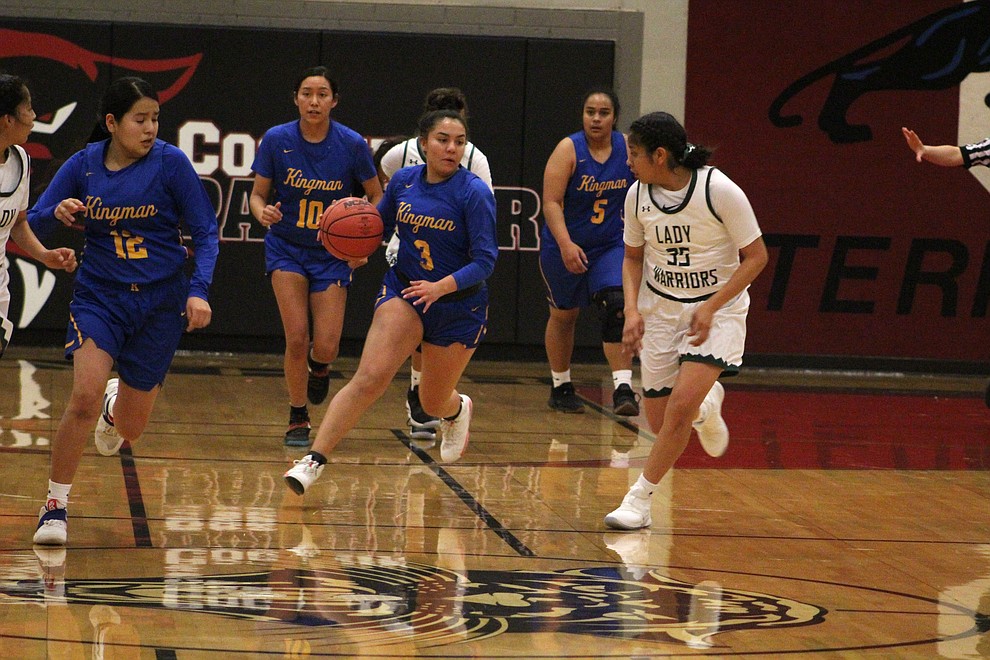 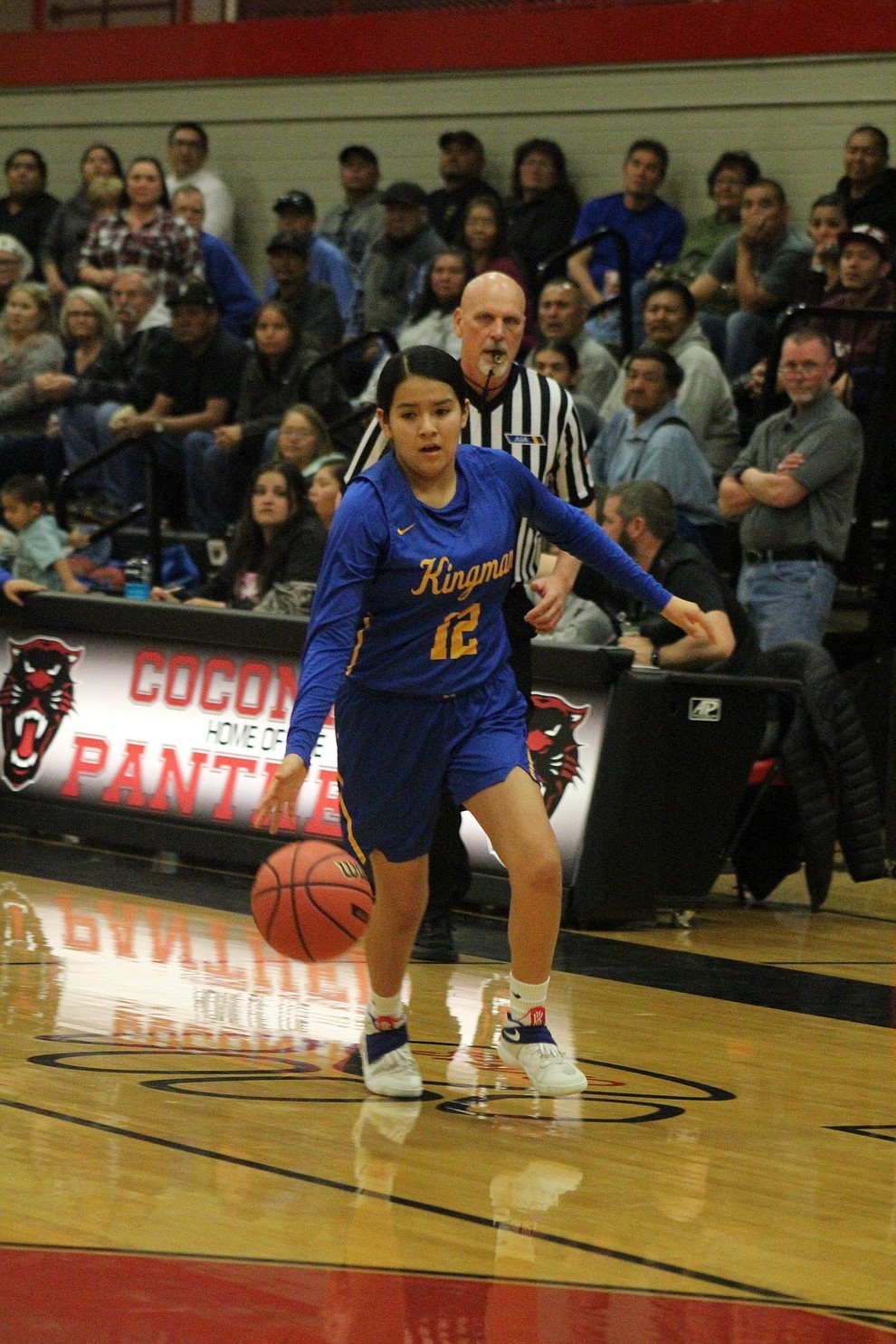 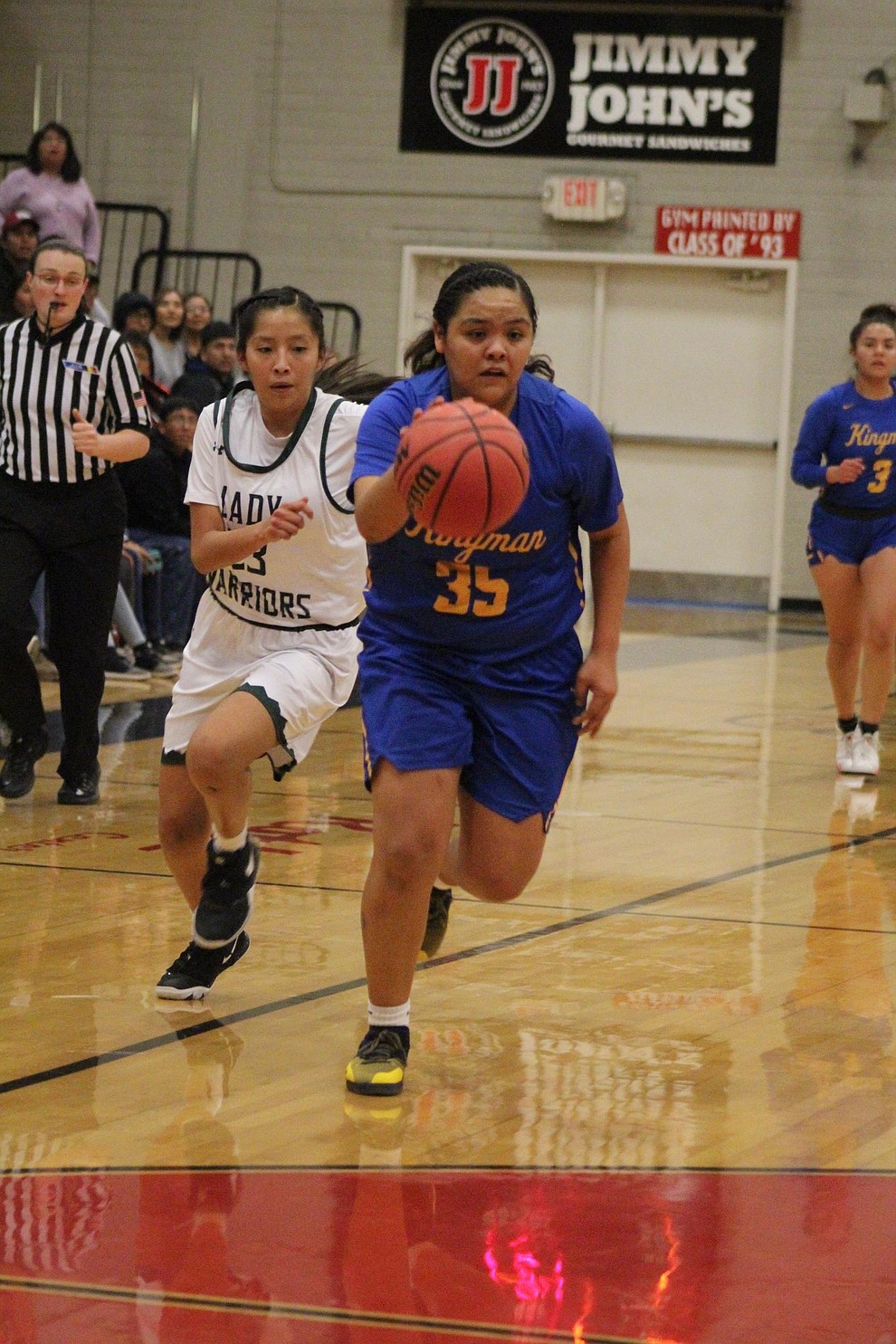 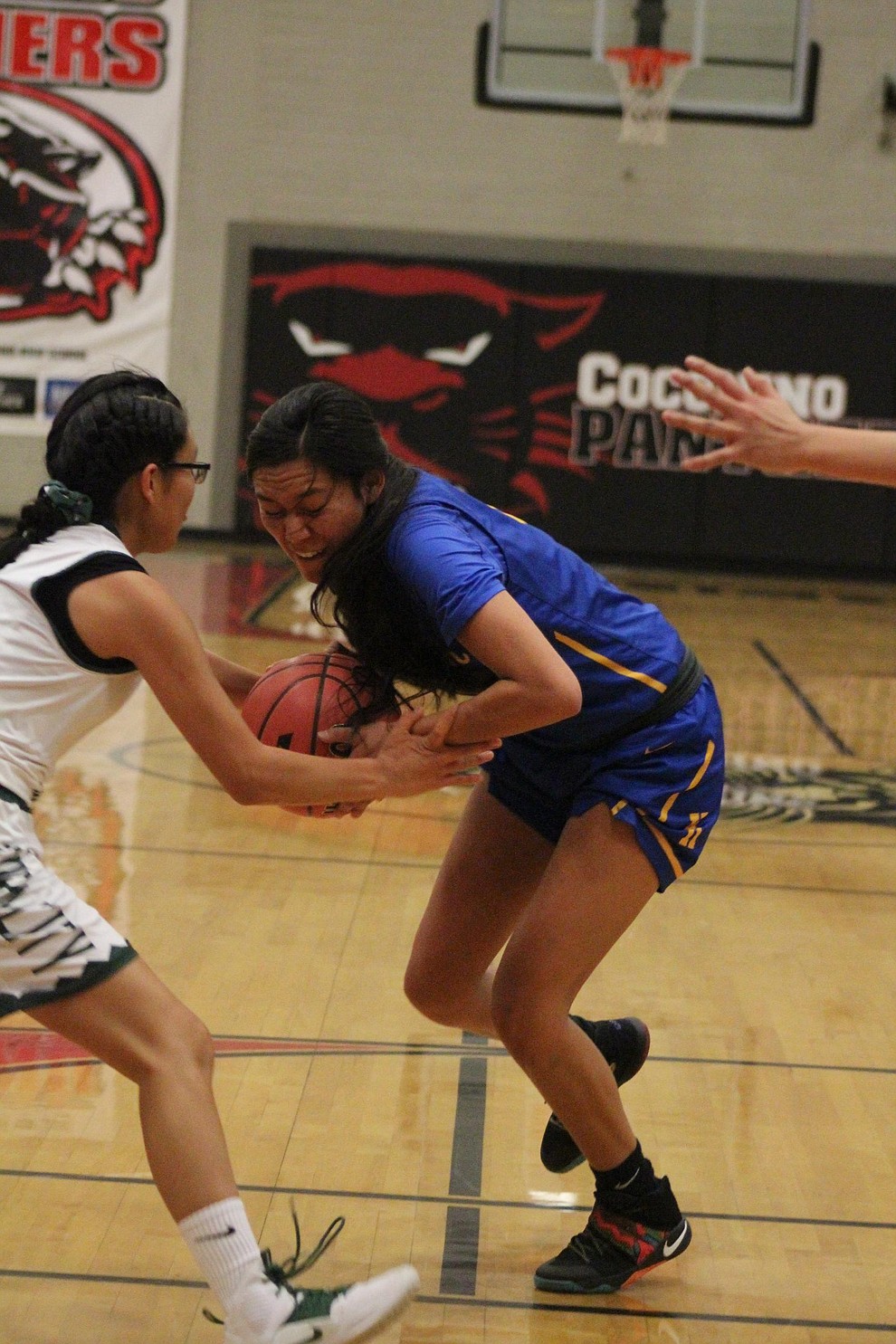 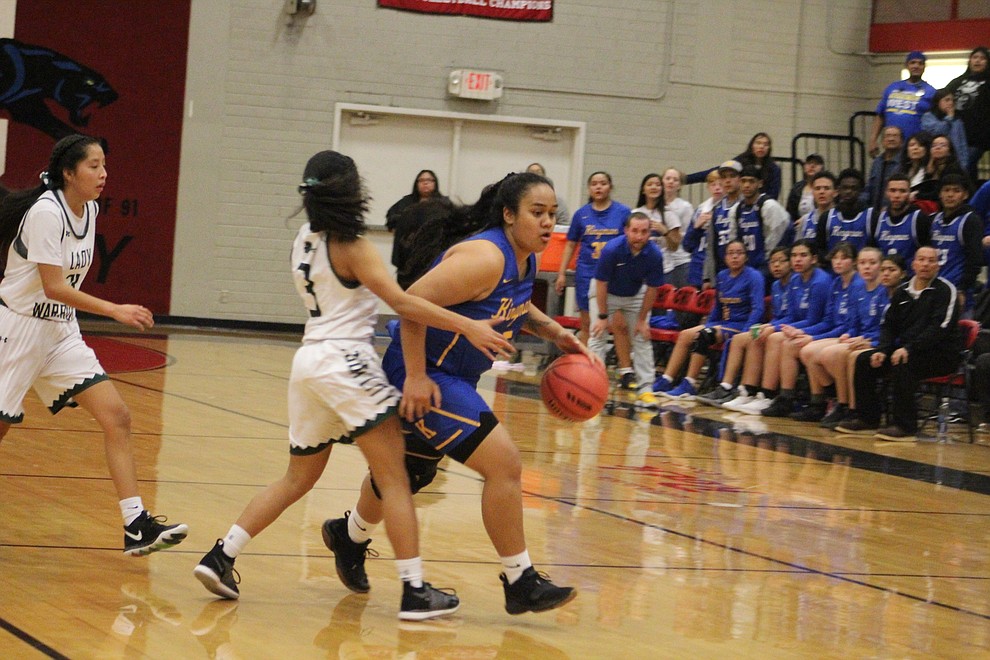 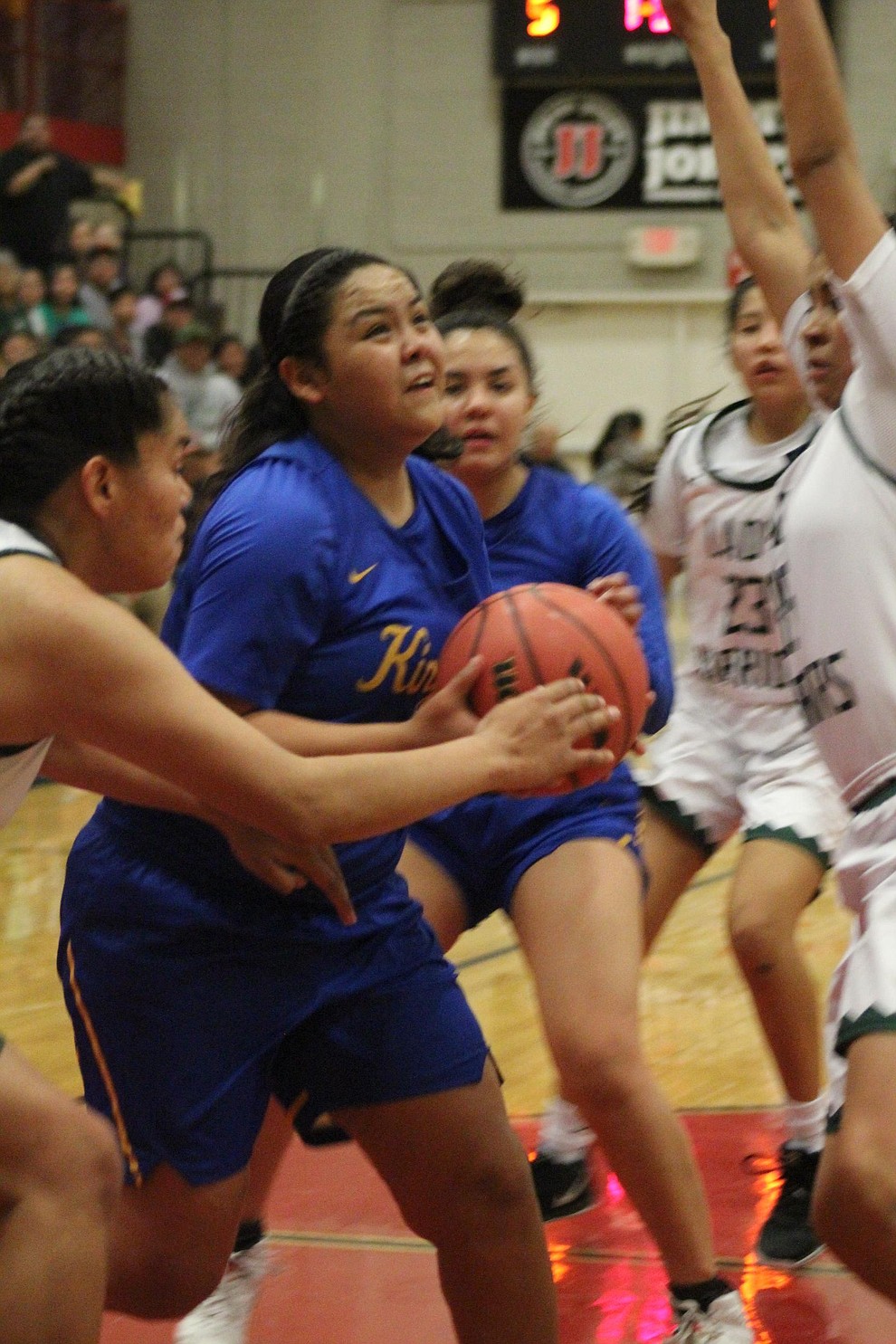 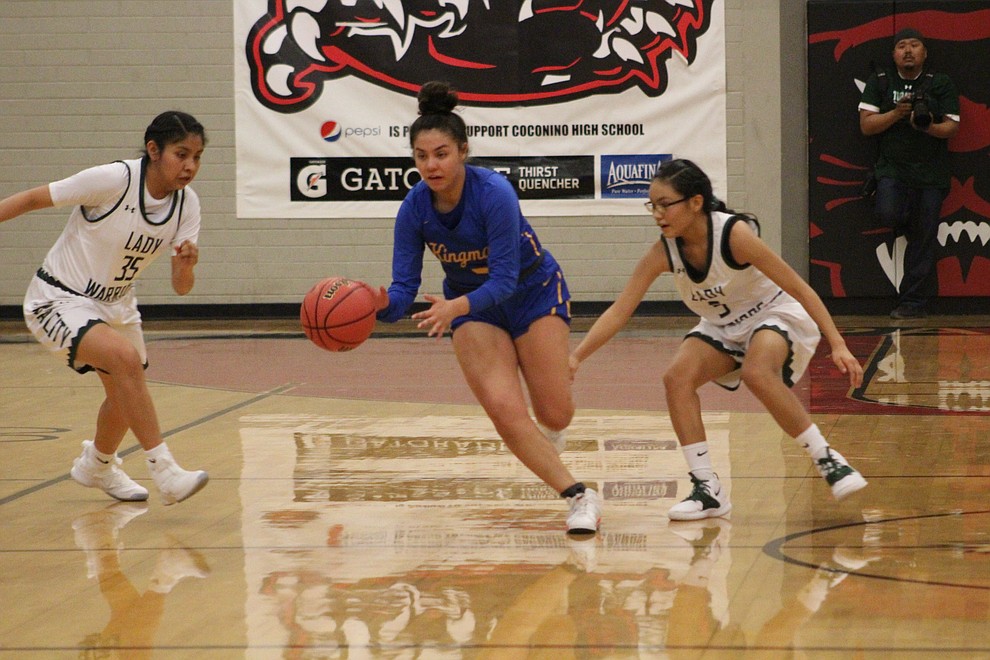 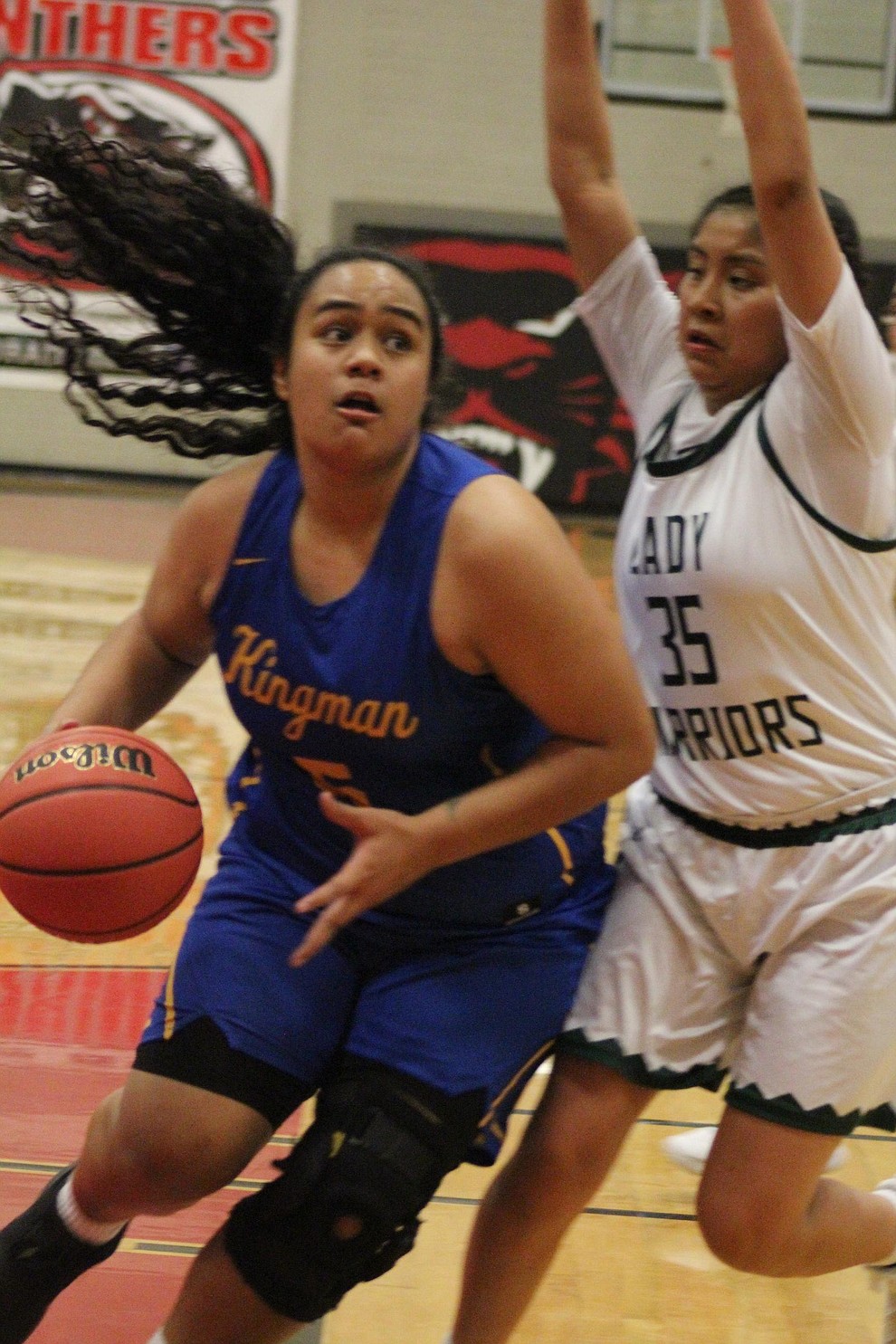 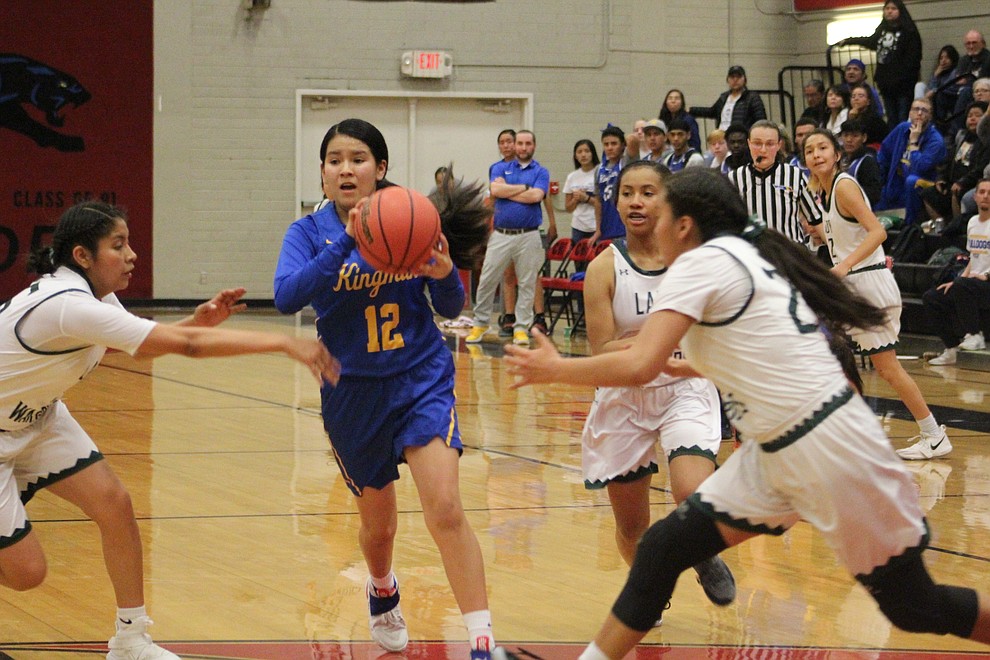 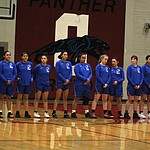 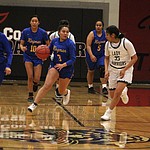 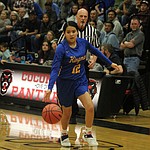 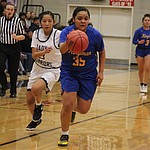 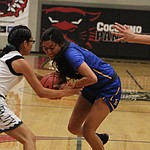 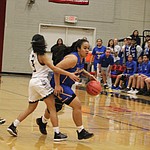 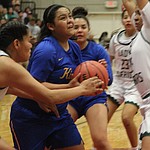 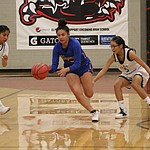 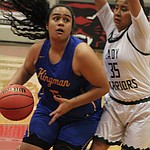 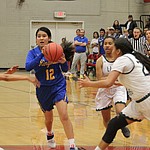 Unfortunately, the remarkable ride reached its end Friday night as the Lady Bulldogs dropped a 71-29 loss to No. 7 seed Tuba City in the second round of the 3A State Championship at Coconino High School.

The No. 10 seed Lady Bulldogs were hoping to return to the state quarterfinals for the first time since 2014, but they ran into a daunting Lady Warriors squad.

The biggest issue all night was the press as Kingman couldn’t find an answer for it and Tuba City capitalized with a number of points off turnovers.

“They’re a quick, athletic team,” Hubbard said. “Give them all the credit in the world to come out and put a run on us in the second quarter that really put us down. But in the end, the killer is that third quarter. They hit I don’t know how many 3s to kind of put it away and make sure we had no hopes of coming back.”

The Lady Bulldogs didn’t fare well in the second and third quarters, scoring just 19 points compared to the Lady Warriors’ 45. And it didn’t help that 18 of those points were from 3-point range.

Tuba City’s Larissa Yazzie was responsible for most of the damage as the junior scored a game-high 24 points – highlighted by four of her team’s seven 3s on the night.

Kingman only trailed 15-6 after the first quarter, but the deficit jumped to 38-17 at half and 60-25 entering the fourth.

It was a hole the Lady Bulldogs couldn’t dig themselves out of as their outstanding season came to a close. But Kingman did have plenty of blue and gold to lift its spirits following a tough loss.

“It was nice to have our fans travel up here and support us,” Hubbard said. “I couldn’t say enough about that effort – to have them come out and help us.”

But at the end of the night, it was still a bittersweet ending to a great season – especially for seniors Payton Chamberlain, Sukwana Quasula and Kearra Tauta.

“We will miss them,” Hubbard said of the trio. “I’m glad they had the year they had. They had a (heck) of a year. I couldn’t be prouder of them and how they played. Those seniors did everything that I could have asked, but there’s a lot of young talent coming back too.

“I’m excited about Shauntel Crozier, Star Talayumpteua, Emilee Araya and all the girls that are coming back," Hubbard continued. "They’re going to do some great things for us next year.”