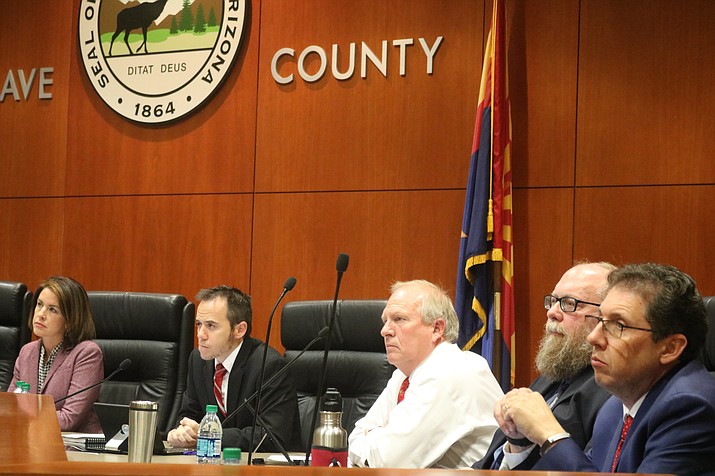 After reducing the plans for Kingman Crossing Boulevard from four lanes to two at its last meeting, Council will look into the matter again Tuesday. (Daily Miner file photo)

Council will hear a report from the City Attorney’s Office on the elections process, more specifically, the recall process associated with the effort to oust Vice Mayor Travis Lingenfelter.

In the work session, Council will receive the Kingman Police Department’s annual report and the second quarter Fiscal Year 2019 financial review and TPT collections report. Councilmembers will also be updated on the second phase of the airport industrial property development, and will be provided results from Kingman’s citizen survey. There will also be a report from the Water Resources Research Center’s annual conference Feb. 1, which City staff attended.

At Council’s last meeting, it voted to reduce the traffic lanes for Kingman Crossing Boulevard from four to two in order to save about $1.3 million which could then be spent on other projects. Vice Mayor Travis Lingenfelter has requested the item be put back on the agenda.

Council will consider acceptance of a warranty deed from Bill Lenhart of Sunbelt Development granting land to the City for a park and fire station site. The land is located north of Airway Avenue and east of White Cliffs Middle School, and is about 24 acres. There will be no fiscal impact to the City.

A job order contract for security enhancements at the Kingman Police Department building will also go before Council. Councilmembers could approve that contract, which is available through the City of Peoria, with CORE Construction. Funding for the enhancements primarily comes from KPD’s capital budget, $95,000, with $38,000 coming from the City’s capital improvement budget.

The rezone for property on the west side of south Slaughterhouse Canyon Road, south of Mission Boulevard, will also return to Council. Granite Bluffs II, zoned R-1-10, lies to the west and Canyon Bluffs II, zoned R-1-6, is to the east. The property is currently zoned R-1-10, but applicant Kathy Tackett-Hicks of KTH Consulting applied to rezone the property to R-1-6 to allow for an approximate 47-lot subdivision. At Council’s last meeting, after the project met with disapproval from residents of neighboring subdivisions, a compromise of R-1-8 was decided upon. The rezone to 8,000 square-foot-lot minimum comes back to Council for a vote.

In other business, the City will consider spending some $163,000 from the Park Capital account for Play Space Design Playground installation at Firefighter’s Memorial Park. Staff has also updated the City’s procurement code, changes to which will be voted on by Council.