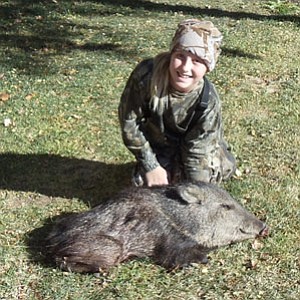 The last of the spring 2019 javelina seasons is set to open Friday, but with the continued unsettled weather, hunt success this year may not be as high as in past years in units favored by local sportsmen.

There are a lot of general tags that have been issued for hunts this year. According to the Arizona Game and Fish Department, there have been 225 permits issued in Units 10 and 18A.

Unit 18B has 500 permits issued for the rifle hunt.

In January, Unit 18B was part of a six-unit block for archery hunts with a total of 1,500 permits. Of course, not all of the archery hunters were in Unit 18B, but a lot were.

There were 100 youth javelina tags in the unit, followed by a 250 permit HAM hunt. Now this unit will have another hunt with 500 permit hunt starting on Friday.

Even with all those permits it appears there should still be plenty of javelina in the unit, according to Region 3 Terrestrial Wildlife Program Manager Erin Butler.

She reported that on the latest survey of this unit (December 2018) they observed 393 javelina in 38 groups. The average herd size was 11.

Butler also reported the hunt success for the previous two years for the HAM and general rifle hunts in Unit 18B.

There is supposed to be inclement weather in the area Friday, and there’s no doubt the weather will contribute to a lower hunt success.

Hunters are encouraged to stay off muddy roads if possible. Find high spots and use binoculars and spotting scopes to look for javelina. Even in bad weather, javelina still have to eat. Look for areas of thick brush where pigs may be.

Use a varmint-type call to see if you can lure the pigs out of the brush to the distress sound. This technique does work.

Remember, if you are walking or driving around more than you are glassing, then the odds are you won’t be successful this year.