Rare success on a Unit 16A HAM hunt 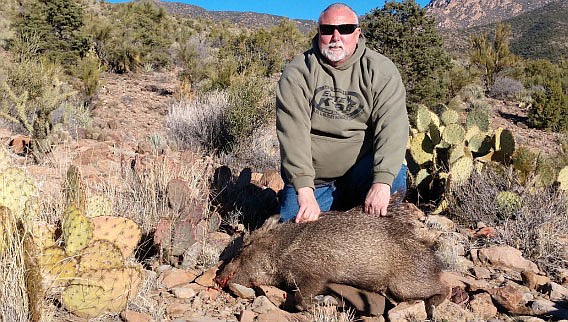 Dave Magers and his 2019 Unit 16A HAM (Handgun-Archery-Muzzleloader) javelina. (Photo special to The Daily Miner)

With all of the unsettled weather the last several weeks in Mohave County, those who have had HAM (Handgun-Archery-Muzzleloader) javelina tags have had a rough time finding the “gray ghosts of the desert!”

The only local sportsman I heard got javelina in the Unit 18B HAM hunt was Mike Cobb and a couple of his cousins.

I heard of one or two in Unit 18A, but overall, it’s been a pretty dismal season.

But for one local hunter, who had a HAM tag in Unit 16A, he found and took a big pig on the second day he went out.

Dave Magers has lived in Kingman for many years and is an avid sportsman. Over the years, he has taken quite a few big game animals. Magers lives in the foothills of the Hualapai Mountains in Unit 16A and he knows the unit well.

Magers was surprised to learn that this year there were left over, first-come first-served HAM, general tags, and javelina tags available in Unit 16A, so he went to the Region 3 office of the Arizona Game and Fish Department and picked up a pair of tags.

In Arizona, hunters are allowed to take two javelina under certain conditions; one of which is that they must have tags for different hunts.

Magers went out briefly on the second day of the hunt, but didn’t see anything.

On the third day of the hunt he was accompanied by his wife, Carolyn.

They decided to try an area where in the past Magers and his son have both taken javelina.

“We were basically just looking around when I spotted them,” Magers said.

First he spotted a large sow and an almost full-grown pig about 75 yards away.

The wind was blowing hard, but fortunately for Magers it was perfect for stalking.

Magers spotted another pig, a large boar, and decided to try a stalk.

The stalk was perfect and soon he was within 20 yards of the unsuspecting porker.

“I fired one shot and dropped the boar,” Magers said.

The boar was large and mature; one of the best Magers has taken.

Now he is waiting for the general season to open to try and fill his second tag.

The general rifle javelina season starts in most of the Mohave County game management units Friday.