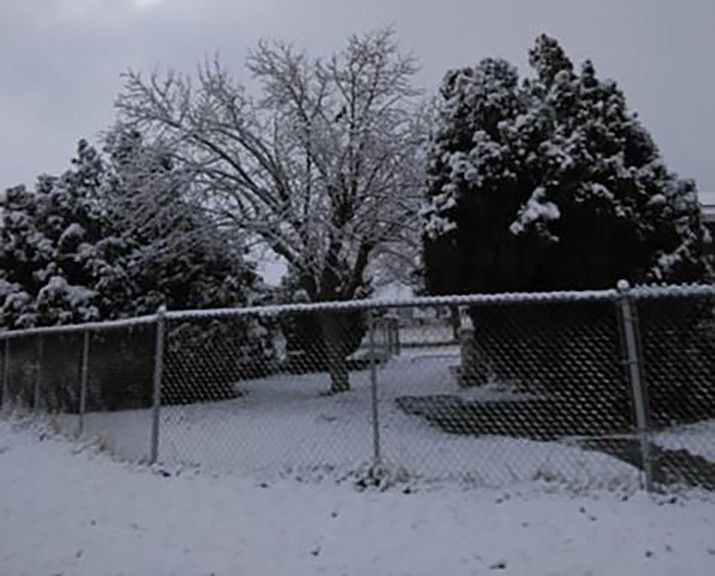 Kingman received about 2 inches of snow overnight Sunday and more is expected beginning late Wednesday through Friday morning. Some estimates have as high as 6 inches locally. (Submitted photo by Frank De La Riva)

KINGMAN – Now that the approximately 2 inches of snow has melted, the City should prepare for another wave of winter storms as the National Weather Service has declared a winter storm watch from 7 p.m. Wednesday, Feb. 20 until 5 a.m. Friday, Feb 22.

The National Weather Service expects an 80 percent chance of snow showers mainly after 11 p.m. Wednesday, which will have a low around 32 degrees. Winds could gust as high as 31 mph, and possible snow accumulation in Kingman could be less than a half-inch.

There is a small chance, about 20 percent, of snow showers before 11 a.m. Friday. And while temperatures will remain chilly throughout the rest of the week, the highest high being 46 degrees Sunday, Friday is the last day there could be snow, for now.

City Public Works Director Rob Owen said Kingman has one snow plow and two motor graders, but that snow removal all depends on the temperature and how much additional snow is accumulating.

The biggest problem Public Works was faced with following the snow storm earlier this week was potholes.

“As we get moisture, whether rain or snow, some of our roads are not in great shape and that gets down through the cracking asphalt, gets hammered with traffic, and we’ll just have potholes blowing out,” Owen said.

He added that citizens who see this problem can call Public Works at 928-757-7467. He also said City staff would be having a preparedness meeting Tuesday afternoon with the Kingman police and fire departments, as well as school districts.

“We’re all going to get together (Tuesday) afternoon to figure out what the game plan is,” Owen said.

Precipitation may arrive in the form of snowflakes
Chance of rain diminishing, snow could fall in higher elevations
Kingman under flash-flood watch
Storm could bring up to half-inch of rain to tri-state region, no snow in forecast
Storm on the horizon, but winter forecast to be warmer than last
Event Calendar