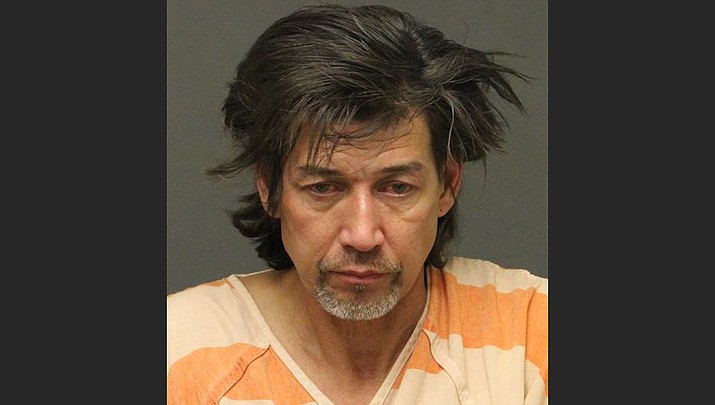 GOLDEN VALLEY – George Thaveesakda Shean, 50 of Golden Valley was arrested Friday after deputies followed freshly made footprints in the snow and followed them to a nearby residence.

Mohave County Sheriff’s Office responded to a residence in the 2800 block of McConnico Road in reference to criminal damage.

The victim reported that a male subject, identified as Shean, had thrown a chair through the sliding glass door on her property. Deputies arrived on scene and observed the glass shattered and a chair lying on its side.

The deputies were led by the footprints to a shed where the subject had gone.

Deputies entered the shed and observed Shean asleep inside. Deputies announced their presence and advised Shean to exit, and he replied with curse words and threats.

MCSO deputies attempted to remove Shean from the shed and he allegedly kicked one deputy in the head with his left leg.

A struggle ensued and the deputy reported that Shean rapidly threw punches at him. A second deputy entered the scuffle was purported to have been struck in the chest several times with Shean attempting to bite the deputy’s arms.

Deputies deployed their taser, Shean became compliant, and was placed in restraints.

The deputy who was kicked in the head was transported to Kingman Regional Medical Center for a possible concussion. The other deputy was not injured.