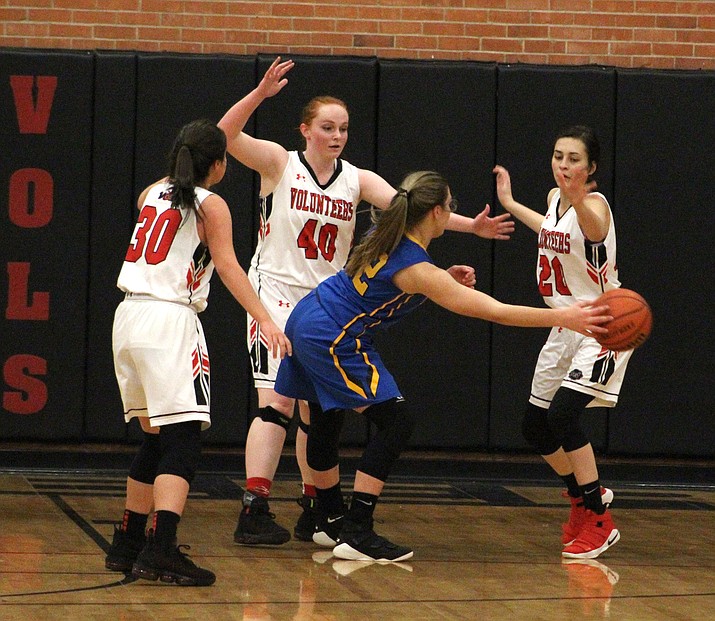 KINGMAN – It’s not often you see a single-digit halftime score in basketball.

But that was the case Thursday as the Lee Williams High School girls basketball team held a slim 9-8 advantage over Prescott before turning it up a notch in the second half for a 30-20 victory.

“We missed like three or four wide-open layups and then we missed two or three rebound put-backs,” Lee Williams head coach Jerry Arave said of the first half. “When you miss that many layups and have that many chances, the game can get taken away from you. We got lucky to win, but our defense really makes up for a lot. Even though we missed those layups, we played good defense.”

The defensive intensity was on display in the second quarter as the Lady Vols held No. 26 ranked Prescott (3-6, 1-3 4A Grand Canyon Region) to two points, but Lee Williams didn’t fare much better by scoring four. The offensive struggles played a big role and Arave knew that was the case.

However, a silver lining in the low-scoring affair was eight different Lady Vols tallied at least one point.

Hayle Davis led the way with nine points, while Hallie Powell scored five and Savannah Jimenez chipped in four points off the bench. Lia Lucero was the team’s leading scorer at halftime with three points.

“We do have balanced scoring and I played 12 of the girls tonight,” Arave said. “But I don’t know what I like better – everyone scoring four or someone scoring 21 so I have someone I know who’s going to score.”

Davis did her best to be the scoring threat as the junior tallied six of Lee Williams’ 11 third quarter points. The Lady Vols used Davis’ contributions to take a five-point lead, 20-15, into the fourth quarter and never looked back in their first region victory of the season.

“It’s big because we lost to Bradshaw, Coconino and Flagstaff, so we needed to win,” Arave said. “We can’t drop one against Prescott, Mingus or Mohave. If we want to go to state, we have to win all those games.”

“It’s good for us because we need more playing time to fix things,” Arave said. “I like that we have a game because we practice a lot. It’ll give us a chance to play more girls and hopefully we can come out with a win.”