Teachers elected amid wave of activism turn to governing 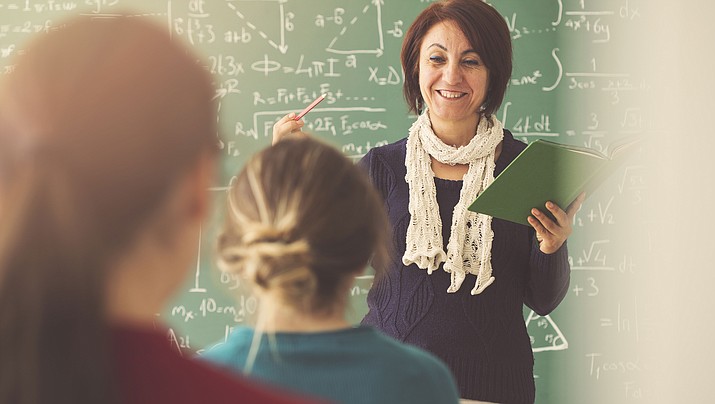 PHOENIX (AP) — After a campaign buoyed by a surge in teacher activism, Arizona's new schools chief took office with a pledge to address the kind of grievances that led to school-shuttering walkouts in several states last spring.

Kathy Hoffman, a 33-year-old school speech therapist, is among hundreds of educators being sworn into office following the #RedforEd protests, which were credited with raising awareness of the needs of public schools and inspiring many educators to join the political fray.

To take the oath of office at her inauguration Monday, Hoffman placed her hand upon "Too Many Moose," a book she enjoyed using in her classroom to help children with speech impediments.

Nationwide, an unprecedented 1,800 current and former educators, administrators and support staffers ran for office in 2018, and more than half of them won, according to the National Education Association, the country's largest teachers union.

As the educators shift from classrooms to statehouses, they have been attending trainings, fielding meeting requests and reading through thousands of pages of legislative proposals. For Democrats who won in the red states where the walkouts took root, there is also the dawning reality that being in the political minority may pose hurdles to passing bills.

School administrator Melissa Provenzano, an Oklahoma Democrat elected to the state's Republican-controlled House of Representatives, said she plans to keep the focus on ensuring teachers' salaries are in line with national averages. A walkout that closed schools in many of Oklahoma's largest districts for two weeks ended with an average raise of $6,180.

"There was a concern there was voter fatigue or public fatigue, and 'Well, you've got the teacher raise and so we're done with you,'" said Provenzano, one of four school administrators elected to the Oklahoma House of Representatives. "But most people can grasp that that was a Band-Aid."

Provenzano's school is two hours from the capital — too far for students to attend the November inauguration — but the ceremony was livestreamed in the building's library and classrooms. "So that was kind of neat," she said.

The #RedforEd protests, in which many teachers wore red shirts, converged last spring on statehouses in Arizona, West Virginia, Kentucky, Oklahoma and Colorado to press for better teacher pay and school funding.

As some participants now learn the ropes of government, there are also signs of new life for the protest movement. Teachers in Los Angeles, the nation's second-largest school district, appear poised to strike as early as Thursday after failed contract negotiations, and teachers have been organizing rallies for this month in Oakland and across Virginia.

Elsewhere, some of the teachers who lost elections are already looking ahead to the next race.

"I won't be happy until I am able to sit at the table to help make decisions about the education system," said Democrat Aimy Steele, a former principal who came within about 2,000 votes of unseating an 18-year incumbent Republican for a House seat in North Carolina, where teachers last year shut down schools with demands for better pay and school funding. Steele plans a rematch for 2020.

"I was definitely not happy with the results, but it did not discourage me from trying," said Steele, who as principal of Beverly Hills Elementary School in Concord said she became frustrated with what she saw as ill-conceived education mandates from lawmakers.

Hoffman, who is taking over a job typically held by career politicians or political insiders, said she knows what students are capable of when they have the resources they need.

"I feel proud to be part of the movement of educators who decided to run for office," she said. "I think that the other educators felt the same way I did, that we wanted our voices to be heard and to make sure that our students had a voice in government, and we were tired of waiting around and waiting for someone to speak for us."