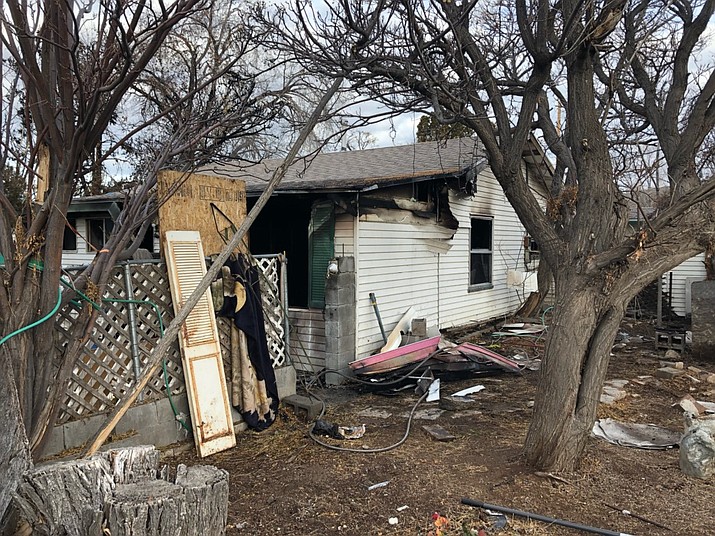 The aftermath of the house on Center Street that caught fire Tuesday, Jan. 8, 2018. The resident of the house was flown to a Las Vegas hospital, and the man lost three of his six dogs in the fire. (Photo by Shawn Byrne/Daily Miner)

KINGMAN – Authorities say an older man was flown to a Las Vegas hospital, three dogs died, and three others were rescued as a result of a fire on Center Street Tuesday night.

Kingman Fire Department Assistant Chief Keith Eaton said in a statement fire crews quickly brought a blaze of a single family residence under control in the 900 block of Center Street at about 10:45 p.m.

After making certain the fire was not going to spread to other areas of the houses, fire personnel were informed that neighbors reported an older man and his dogs lived at the home, but didn't know if he was there at the time.

Fire crews attempted to enter the residence through the front door, but the resident was found on the floor blocking the door. The door was quickly removed and the man removed from the fire.

Paramedics treated the man, American Medical Response transported him to Kingman Regional Medical Center, where he was flown to Las Vegas for further treatment.

Six dogs were found at the property. Three were found dead, two escaped injury, and the sixth was resuscitated by firefighters who used a “FIDO Bag.” This bag is a specialized oxygen treatment for animals. The dog is expected to survive.

Four engines and Battalion 2 reported to the fire from KFD. Investigators were still on scene as of 2 a.m. Wednesday trying to determine the cause of the fire. No firefighters were hurt in the blaze.

The amount of loss due to the fire is unknown at this time.