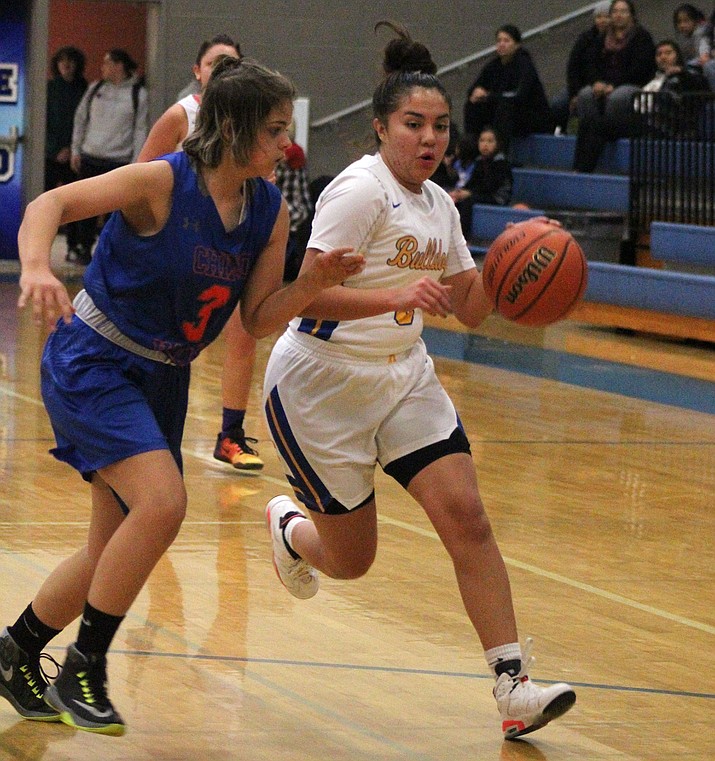 Sukwana Quasula led the Lady Bulldogs with 18 points Tuesday in a 44-32 victory over Chino Valley. (Photo by Beau Bearden/Daily Miner)

KINGMAN – Adversity was trying to ruin the evening Tuesday, but the Kingman High School girls basketball team didn’t let it. Instead, the Lady Bulldogs overcame the loss of their defensive leader to hold off Chino Valley 44-32 for their eighth straight win. 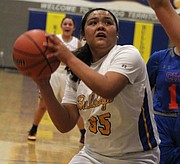 “When we were having a letdown, I called a full timeout and sat everyone down and said, ‘This is your season. This is yours,’” said Kingman head coach Kevin Hubbard. “And they take ownership of it. That’s the great part about this team. They play together. They win together. There is no one that’s not important on that bench or on that court at any time for us. Any of them could be called on to step up and win games for us at any moment.”

That statement became even truer when senior Payton Chamberlain went down with an ankle injury during the second quarter. While the Lady Bulldogs held it together before halftime, that wasn’t the case in the third as No. 15 ranked Chino Valley (5-4, 0-1 3A West Region) outscored them 11-8.

“We didn’t have a good shot blocker, that’s for sure,” senior Sukwana Quasula said. “She’s the one that basically works insides for us and helps rebound. It was hard.”

Chamberlain led the 3A West Region with 28 blocks entering Tuesday’s game and Hubbard knows how much Kingman will miss her if she is out extended time.

“She plays aggressively, she’s the captain of the defense,” Hubbard said of Chamberlain. “She’s calling out reads and she’s calling out what’s moving. So we got a little lost for a moment. And that’s the tough thing with a senior who’s playing as well as she is. You lose that and you get a little lost. (But) we came together and pulled it together.”

No. 9 ranked Kingman (8-1, 2-0) proved why it is one of the elite teams in the 3A Conference by quickly turning it around in the fourth quarter. The Lady Bulldogs did so as a team too, as three different scorers found the basket during a 6-0 run that pushed the advantage to 39-28 with 5:21 remaining.

“We have great chemistry together,” Quasula said. “We have a great team. I just love them.”

Quasula ended up with a game-high 18 points, while Shauntel Crozier scored eight and Emilee Araya added six points on a pair of 3s.