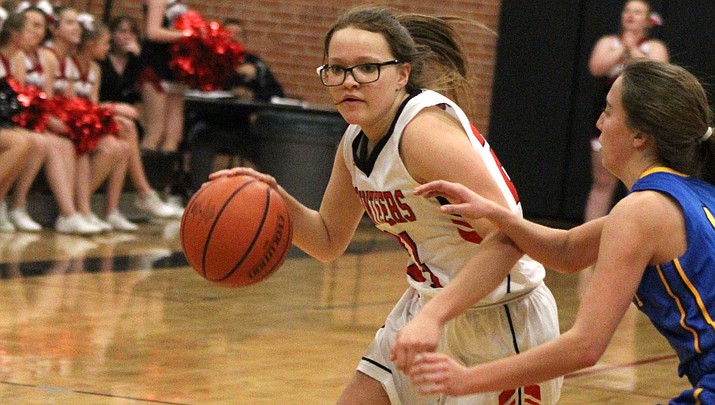 KINGMAN – One thing is certain about the Lee Williams High School girls basketball team this season – when the baskets aren’t falling, the defense will pick up the slack.

The Lady Vols proved that once again Tuesday as they overcame a sluggish start on the road to tally a 40-32 win over 33rd-ranked Mohave (3-8, 0-5 4A Grand Canyon Region).

“For some reason, we seem to need a quarter to really get going,” said Lee Williams head coach Jerry Arave. “But when our press forces turnovers, the girls really get excited and it helps our offense get going.”

The second quarter proved just how much the Lady Vols’ defensive pressure can help spark the offense. Following a four-point first quarter, Lee Williams exploded for 17 points in the second.

Liberty Cronk was a big part of the scoring as the junior hit two consecutive 3-pointers to help the Lady Vols pull away for a 21-12 halftime lead.

Lee Williams carried the offense over to the third quarter as they outscored Mohave 14-11 on the way to their fourth straight win.

Cronk finished with 10 points, while Ellie Thomas and Kaylee Bond each scored six.

At Mohave, the Vols continued their successful season Tuesday night with another rout – this time cruising to a 72-43 victory over the 36th-ranked T-birds (2-8, 0-4 4A Grand Canyon Region).

Kingman fell into an early 1-0 deficit, but Yahir Boo answered with a penalty kick in the ninth minute to tie the score at 1-1. Unfortunately, the momentum quickly shifted the other way as Paradise Honors took a 2-1 halftime lead and pushed its advantage to 4-1 in the second half.

Alejandro Canales brought the Bulldogs within 4-2 when he scored in the 68th minute. That was as close as 47th-ranked Kingman could get in the loss.

At Lake Havasu, the Lady Vols couldn’t start off the New Year with a win as they dropped a 4-3 loss to the 21st-ranked Lady Knights (4-1-1).

Mackenzie Cathey led No. 24 ranked Lee Williams with two goals and one assist, while Sadie Serrano scored a goal and Cindy Ramirez tallied an assist.

The game was all knotted up at halftime 1-1, but Lake Havasu outscored the Lady Vols 3-2 in the second half.