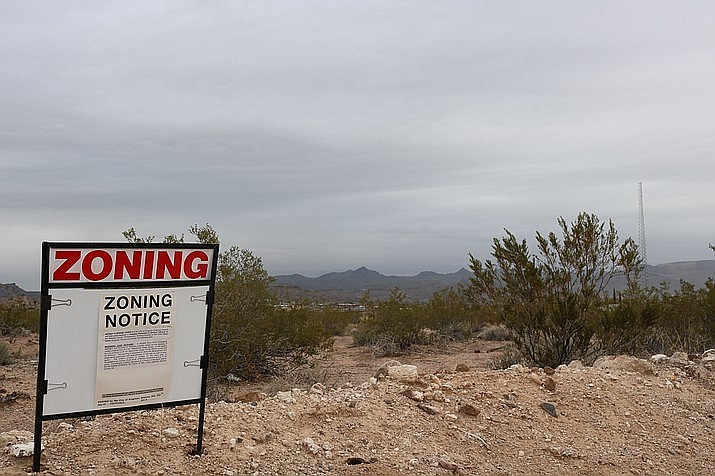 After voting unanimously to approve a rezone at Slaughterhouse Canyon Road that would have reduced the size of lots, the City Planning and Zoning Commission reversed course and denied the rezone unanimously at Tuesday's meeting. (Daily Miner file photo)

KINGMAN – The rezone application for property on the west side of Slaughterhouse Canyon Road initially approved by the City Planning and Zoning Commission was denied after further consideration Tuesday.

The Planning and Zoning Commission voted unanimously to approve the rezone at its November meeting.

However, at a December meeting, City Council decided it was best to send the matter back to planning and zoning to allow for additional public comment. That decision came as some councilmembers were concerned about the notice given to the community regarding the possible rezone.

The commission received that input at Tuesday’s meeting. Some questions asked and concerns relayed were regarding traffic impacts of the proposed subdivision, street improvements, environmental concerns, small lots being placed close to larger lots and high-density development, and a lowering of property values.

Citizens even said there are petitions circulating in surrounding neighborhoods, with many of those residents opposed to the rezone request.

Commissioner Charmayne Keith said that she is pro-development and understands the need for housing, but doesn’t feel there is a need to rezone the property from R-1-10 to R-1-6, especially in light of public comment.

“Now that I’m hearing the public response, I’m going to have to go with the majority,” added Commissioner Terry Shores.

Commissioners were also concerned about necessary improvements, traffic and otherwise, stemming from the rezone and subsequent development, which the City cannot afford at the moment due to the 1 percent decrease in the sales tax rate.

A motion was made to keep the zoning as is at R-1-10 and deny the rezone application. The commission unanimously approved that motion. Commissioner Terry Hunsicker was not present.