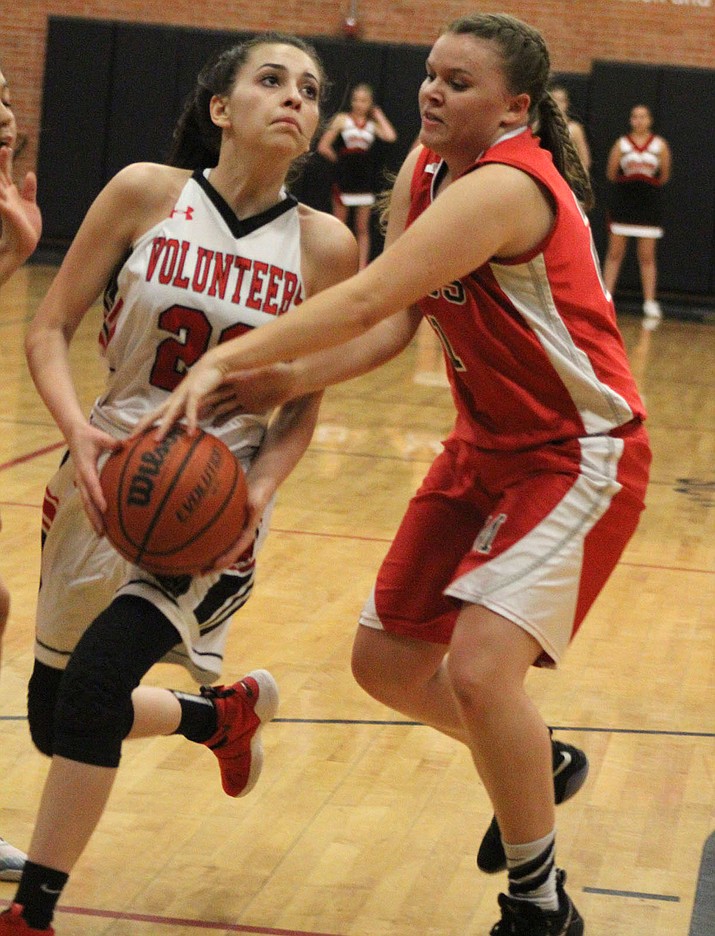 Hayle Davis led the Lady Vols with nine points Friday in a 35-34 victory over Mingus. (Photo by Beau Bearden/Daily Miner)

KINGMAN – It’s never easy for a squad to learn the hard way, especially if it results in a disappointing loss. 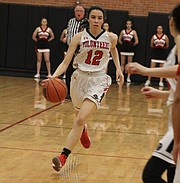 Luckily, the Lee Williams High School girls basketball team avoided one part of that Friday as it rallied late for a 35-34 win over Mingus.

“We’re learning some lessons – fortunately we’re learning them by winning,” said Lady Vols head coach Jerry Arave. “We could have easily lost that game. Mingus was believing – they thought they could win. I tell the girls all the time – ‘If a team believes they can win, they can.’ If we would have just kept our foot on the gas pedal.”

But Lee Williams couldn’t increase its four-point halftime lead and instead found itself trailing early in the third quarter.

The momentum was shifting in favor of the 31st-ranked Lady Marauders and the Lady Vols needed an answer.

So Arave decided to bench all of his starters.

“In the third quarter they just weren’t doing what they were supposed to do,” he said. “Sometimes you have to send them a message. If they’re not going to play hard, (I’ll) play the other girls. I told them to think about it and one by one they kept saying, ‘I’m ready, I’m ready coach.’ It still took us a little while, but we finally picked it up in the fourth quarter.”

The tough love proved to be just what Lee Williams needed despite the fact it trailed by seven, 27-20, with 6:18 remaining in the game. It didn’t look good, but in a blink of an eye the Lady Vols were right back in the game with a 6-0 run to cut the deficit to 27-26.

However, Lee Williams was still in a back-and-forth battle and needed a big shot to take the wind out of Mingus’ sails.

Cue Liberty Cronk – the junior stepped up with the team’s first 3-pointer of the game and it couldn’t have come at a better time as it gave the Lady Vols a 32-31 advantage with 1:18 on the clock.

“That was clutch,” Arave said of Cronk’s trey.

“Liberty (Cronk) made some really good plays at the end,” Arave said. “She did really well in the last two minutes of the game. She took control.”

And it’s a good thing she did because the Lady Marauders (3-8, 2-4 4A Grand Canyon Region) sank a buzzer-beating 3 of their own to account for the final score.

“It’s big because now we’re 3-3 in the region,” Arave said. “We have Flagstaff next week, which is going to be a tough game. But we played them tough here for the first half. Our thing is we have to play four quarters.”