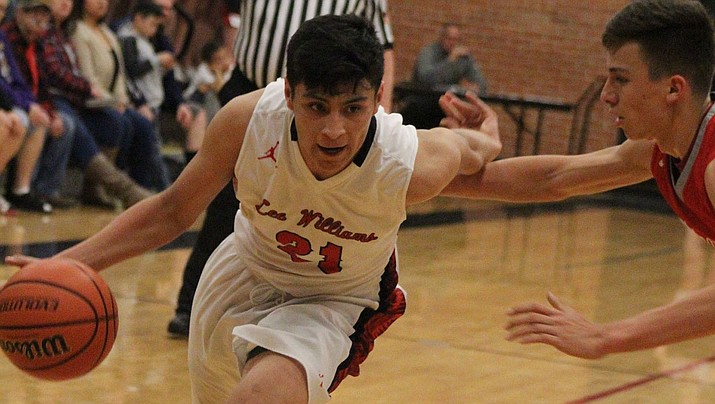 KINGMAN – There was a lot on the line for the Lee Williams High School boys basketball team Friday night against Mingus. 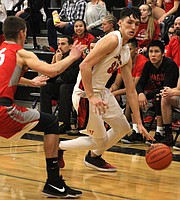 A victory would not only propel the Vols into sole possession of first place in the 4A Grand Canyon Region, but also set a new school record for region wins.

Lee Williams made sure it accomplished both by beating the Marauders 53-47 in front of a packed crowd, but don’t think this is the top of the peak.

“We care about this win, but we have bigger goals,” senior AJ Herrera said. “Everyone here knows we should be No. 1 and we are going to be No. 1. We’re always going to keep going. We want to go higher. We don’t want to just be No. 1 in our region, we want to keep going.”

Herrera and the Vols have a great chance to do that and showed why against the 19th-ranked Marauders.

“It took everyone to do that,” Herrera said. “It wasn’t just one person, not two people – everyone came in. Our subs came in and they did amazing. It took the whole team to beat this team. We’re just going to keep on going.”

The great start to the third quarter didn’t just materialize out of thin air though.

Lee Williams head coach Cain Atkinson let his squad figure out what to fix and it proved to be the right medicine.

And even more impressive was the fact Lee Williams outscored Mingus by a 22-9 margin in the third quarter.

“That second half, just like the past couple of games, we came back focused,” Atkinson said. “We took care of business defensively. The second half was pretty good. I’m pretty pleased with that.”

Herrera led the way with a game-high 17 points, while Aaron Santos scored 10. Kade Juelfs and Diego Narvarte rounded out the top performers with eight points each.

“The brotherhood here is crazy,” Herrera said. “Everyone is friends – we do everything together. We’re a team. Everyone here works their butt off. Everyone challenges everyone. And everyone just wants to win. That’s just what it is.”

“We’re in first place and we’ve never won five games in the (region) before – that’s awesome – but it’s not our end goal,” Atkinson said. “We know that we need to take it one day at a time, one game at a time. We’re seeing the bigger picture. We want to play at state and quite honestly, we want a home state game. That’s kind of the goal. If we continue to win, good things will happen for us.”