‘The Upside’ a light-hearted comedy 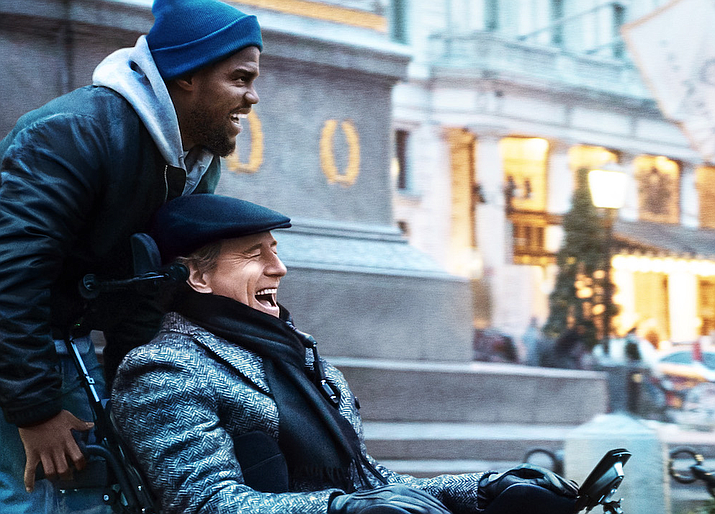 “The Upside” joins the foray of remakes that hope to capitalize on a flipped version of that which was already vetted and brilliant. As a remake that insisted on slipping from the shackles of the award-winning original, it misses opportunities to tell a new tale with wit and passion and chooses to paint-by-numbers with cheap watercolors. The saving grace is the phenomenal chemistry between Kevin Hart and Bryan Cranston in this GQ version of “The Help.” It will exhilarate some and sputter for others.

The film is intangibly based on the real lives of Phillippe Di Pozzo Borgo and Abdul Sellou, who were originally portrayed in the record-breaking French film, “Intouchables.” A 2012 Telegraph article explains, “Their friendship was unlikely because Phillippe, who is the second son of a French duke, was born into a life of great wealth and privilege.

Abdel was a career criminal from Algeria who had immigrated to France and had only applied for the job of Phillippe’s carer so that he could keep claiming his income support.” In this rendition, Kevin Hart is Dell Scott, a hapless African-American man with a rap sheet and scathing sense of humor and Bryan Cranston is Phillip Lacasse, a wealthy, White quadriplegic businessman. Dell applies to be Phillip’s health aide so that he can pay child support.

Dell teaches Phillip that he’s a privileged, spoiled man who can enjoy life because he still has the oyster of the world at his fingertips despite his paralysis. They joke at the Opera, they enjoy a few smokes of weed, they turn up at Phillip’s birthday party and Dell encourages Phillip to call a romantic pen pal. When Phillip falls into a depression, Dell ultimately saves him from despair. Phillip, in turn, tricks a friend into paying $50,000 for a painting that Dell creates which has a magazine cut-out of a Doberman Pinscher’s head glued on a fingerpainted body with Afro-piks as feet. Dell also learns to like opera, starts a business after Phillip fires him and is able to buy a home for his teen son and the son’s mother.

For people who enjoy light, superficial fare with positive messages – this is for you. In our polarized Union, this film reminds us that rich White men aren’t totally heartless and African-American men aren’t always the devil. If given a chance, they can be friends when the White man hires The Other and they go paragliding together in breathtaking scenes to the enchanting vocals of Aretha Franklin’s Nessun Dorma.

They’ve thrown veteran Oscar-starlet, Nicole Kidman, in for good measure to be the Pepper Potts to Phillip but how a film manages to waste Kidman and Golden Globe winner, Julianna Margulies, in the same production ravages the mind. The chemistry between Hart and Cranston is natural, believable and impressive. Hart tones down much of his quirky schtick but the two share several jokes that are genuinely chuckle-worthy. Kidman looks as though she’s on vacation from the high-action success of “Aquaman” and effortlessly plods along with the other superb actors who are neglected.

For scholars of diversity and social justice, all the horrors you imagine from racialized cinema unfold in this film. It’s atrocious. The only consolation for enduring Kevin Hart as the magical Negro is that – much like Will Smith as Bagger Vance – this media could be the piece that catapults Hart to momentous material and the Oscar A-list as an actor ... though, apparently, not as its host. Hart’s character is a felon, he drops envelopes of money under his baby momma’s door in the projects, he can’t pronounce Basquiat, he needs a shape-up and trim and he badgers Phillip about supporting ideas for his business schemes. He says everything we’re thinking out loud. While, it’s a frivolous remake, it tosses aside ample opportunity to address several sub-plots with maturity and depth: Yvonne’s (Kidman) relationship with Phillip and her past, the other household workers, Phillip’s escalatory romantic relationship, Dell’s relationship with his son and the son’s mother and Dell’s successful entrepreneurship.

The stereotypes the film espouses are equally damaging for White men. Cranston is the wealthy, White male who’s lived a wonderful life and sustained a tragedy that’s left him paralyzed. He has moments of bitterness but nothing that makes the character engaging or edgy. He’s just a nice guy who picks a criminal to be his health aide in a city where he could have hired an educated, registered nurse or an experienced, qualified aide. He clearly has no Black friends but – luckily – can hire one in times of crisis. He wasn’t willing to give Dell seed money for his business but tricked another friend into doing so. Nothing says friendship like miserly dishonesty.

Naturally, there are numerous actors with physical challenges who could have been pinned for Phillip’s role but they weren’t because Hollywood is no bastion of equality or innovation. Such a choice would have put this film on par with the original, “Intouchables.”  Oh, but wait. That film was already made and was superb.

Completed in 2017, the film was salvaged from Weinstein and Company’s trash can by STX films and remarketed as a heartwarming film to absolve it of Harvey’s sexual misconduct charges and corporate implosion. Fast-forward 2-years and despite Hart’s recent dis-apology over homophobic Tweets of old, the film has skyrocketed above expectations at the box office. Irony.

Fans of Cranston: 3 out of 5 Miners

Fans of the Original, Meaty Dramas or Social Justice: Skip it

Fans of Lighthearted Humor: 4 out of 5 Miners

‘Glass’ stays at No. 1, while ‘Miss Bala’ opens in third
'Ride Along 2' filled with funny mayhem
‘Glass’ is No. 1 again, McConaughey’s ‘Serenity’ flops
Panda sequel entertaining for all ages
‘Death Wish’ carnarge doesn’t measure up