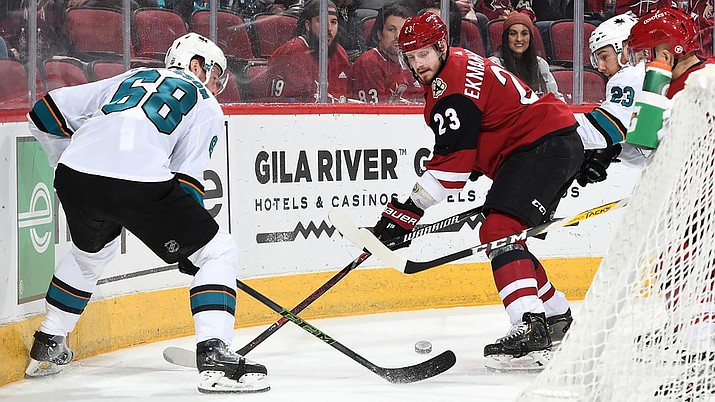 GLENDALE (AP) — Arizona has lost its No. 1 goalie for the season and several regulars to significant injuries. But the Coyotes have not lost their fight.

Christian Fischer had a goal and an assist, Richard Panik scored Arizona's 12th short-handed goal of the season and the Coyotes snapped San Jose's seven-game winning streak Wednesday night with a 6-3 victory over the Sharks.

The Coyotes have won four of five and moved within four points of the final playoff spot in a tight Western Conference as they prepare to face another perennial postseason contender in Pittsburgh on Friday.

"We realize what position we are in," defenseman Oliver Ekman-Larsson said. "You look at the standings right now. It's wide open.

"We're right there. I don't know how, to be honest with you. A lot of injuries. We are just finding ways to get points. That's what we have to do now. We're playing hard, playing the right way."

It was Ekman-Larsson's 108th career goal, tying Teppo Numminen for the franchise record among defensemen.

Darcy Kuemper made 26 saves for Arizona, extending his winning streak to four games. Kuemper became the regular when Antti Raanta was lost for the season with a lower-body injury.

Kevin Labanc had a goal and two assists, Evander Kane got his 17th goal and Logan Couture scored for the Sharks, who were playing the second of back-to-back games after beating Pittsburgh at home Tuesday.

"It's all hands on deck with that team," Coyotes coach Rick Tocchet said. "They're a Cup favorite, so it was nice to win that game.

"The guys have done a nice job of having a day-to-day attitude. Short memories, work hard in practice, stick with the game plan and get some individuals playing better."

The Sharks had not lost since falling 8-5 to Calgary on New Year's Eve and had given up only 10 goals in their last six games.

"It's tough since we were on such a nice run," Couture said. "You never want to go crazy when you lose, but you're disappointed when you lose, especially a division game and a game that in your mind is winnable."

Dell made 36 saves while starting in place of Martin Jones, who tied a career best with his eighth consecutive victory in the 5-2 win over Pittsburgh on Tuesday.

"We were uncharacteristically a little sloppy, a little soft," coach Peter DeBoer said. "We knew we had to get our emotional level back engaged after the game last night, and we didn't do it quickly enough or for long enough."

The Coyotes killed off three of four penalties and have given up an NHL-low 16 power-play goals in 137 chances, the best percentage in the league.

NOTES: Sharks forward Marcus Sorensen played in his 100th NHL game. He has set career highs with eight goals and 15 points this season. ... Ekman-Larsson (2011) and Crouse (2016) scored their first career goals against the Sharks. ... Clayton Keller had an assist for Arizona and has 99 points in 131 games, poised to pass Max Domi as the quickest in franchise history to 100 points. Domi did it in 154 games. ... Calgary (14) is the only team with more short-handed goals than the Coyotes.

Sharks: Play at Tampa Bay on Saturday, two weeks after snapping the Lightning's 16-game point streak when Kane scored two goals to reach 200 in his career during a 5-2 victory.

Coyotes: Host the Pittsburgh Penguins on Friday before a six-game road swing, three on each side of the All-Star break