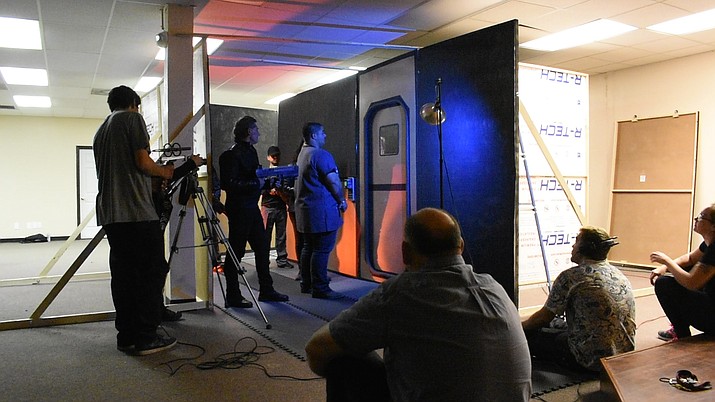 Behind the scenes look of the sci-fi web series “Destination” cast and crew who were on a private location in Kingman. (Photo courtesy of Desert Warrior Productions)

No matter how big or small the motion picture may be, it can bring the audience joy, sadness, rage, fright, laughter and overall a memorable time. The audience gets to experience the final product, but before a film hits the big screen, time, work and dedication finishes it.

Filmmakers come across bumps in the road. Some of the bumps include not getting the right shot, losing an actor, weather or even money. These obstacles don’t make filmmakers lose sight of their goal, and that’s to finish what they envisioned.

Brian Brown, a local filmmaker with Rebel in a Box Productions, has been filming in the Tri-state area for about nine years. Currently he is working on two projects that are filmed locally. “Almost a Love Story” is a short film about a modern day love story from a male’s point of view. The second film is a feature, “Stick to your Guns,” about a young high school couple on the run, resembling Bonnie and Clyde.

Elona and Kenneth Ostrom, filmmakers with Desert Warrior Entertainment, have had a passion for film since they were 12 years old and are currently using the desert landscape to film their sci-fi web series. “Destination” is set on a prison colony in the Alpha Centauri system and takes place years into the future.

Filming a film or web series takes time from the moment the idea sparks in the brain to the moment it’s up on the big screen.

Filmmakers have to think of a concept, write the story, find actors and crew, film and edit.

“I think it’s more challenging to write a web series than a feature film,” Elona said. “You have to think ahead. We have to think of all the connections and roads we can take.”

Brown finds it difficult when he has to edit his film. When he starts editing he realizes that certain scenes he shot aren’t exactly up to par with his expectations, and it can be very time consuming.

“I look at the filmmaking process like a fight preparation,” he said.

The fight camp is the script, filming is the fight and editing is the final round, Brown said.

Financially supporting a film is always a big factor in filmmaking. Local filmmakers don’t have the luxury of having a Hollywood budget.

Many times filmmakers can’t produce what they have in mind. Desert Warrior Entertainment wanted to do a western but quickly came to realization that they needed wagons, a lot of horses, and props.

Local filmmakers are always looking for volunteers, actors, and donations of props or services.

Local filmmakers don’t have a Hollywood-style budget so they have to work with what they have and can get. Many of those working on the film have to play multiple roles.

“We all have to put on different hats,” Elona said.

In the web series, Elona is the director, edits the film, does costuming, music, is a writer and a lead character. Kenneth plays one of the main characters, does camera work, audio, writer, props, set building and some stunt work.

Mark Hamson, with Desert Warrior Entertainment, helps in the series with stunt work, plays a few roles and is on hand to help with anything else.

Brown is a director, writer and editor. He has been involved in the area for quite some time. He doesn’t find it hard to find people to work with, but difficulties can be finding time to work together.

“We’re weekend warriors because we have to do it on our days off,” Brown said.

There are times when he gets people who are enthusiastic about film, but aren’t dedicated.

Desert Warrior Entertainment finds it hard to find time to work on projects because everyone has different schedules. Other issues include finding actors and locations.

Arizona is a sunny state with mountains, lakes, rivers, forests and desert landscape. Every now and then the weather isn’t the best with winds blowing and unbearable heat.

Brown said the weather is a challenge when it comes to filmmaking.

“The hard part about shooting in the desert is the wind,” Brown said. “It’s really hard to get good clean audio.”

Utilizing the natural landscape can be difficult when using technology. Batteries and generators are essential when filming out in the desert, Elona said.

Filming in remote areas, cast and crew need to haul the essentials out to where they are filming.

“The worry is if we hike up six miles and forget the extra batteries,” Hamson said.

Cast and crew need to make sure to have everything they need before heading out to film, if they don’t, they lose time.

Brown has brought other production companies to the area to film and really sells the local scenery, and said that depending on what needs to be filmed, a location is nearby.

“Within 40 minutes you have everything you need to shoot,” he said. “You got the mountains, river, lake, Kingman, and Bullhead City.”

Local filmmakers enjoy the support they have received from the community.

“I really love the local community, how they support us and get behind us,” Brown said. “They just open their doors and get excited about filming.”

Brown has had other production companies come to the area that have shared with him how the community is welcoming and how they don’t see that generosity in Hollywood.

Desert Warrior Entertainment has also had the community’s support when it comes to filming.

“Urban locations and smaller cities are more open and relaxed,” Kenneth said. “You can just walk in and talk to the owner.”

Brown would tell the Kingman community that local filmmakers are doing it for the passion and the art, and some may be doing it for living.

“We do it as an art that we want to express,” he said.