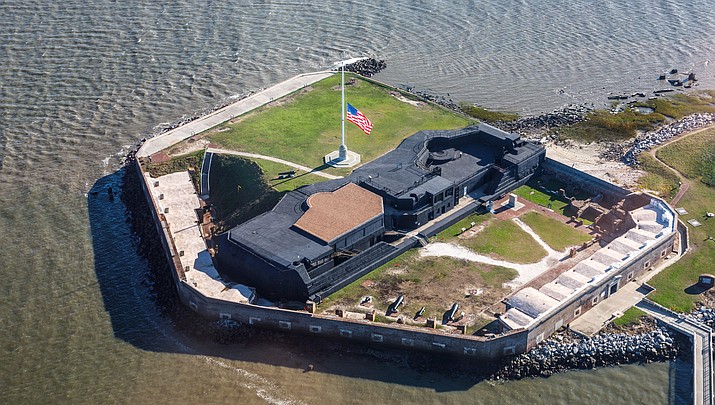 There were more than 85 days of lowered flags in Arizona in 2018, nearly one-fourth of the year. Nearly one-third of the time was due to the death of President George H. W. Bush. (Adobe Images)

Using the position of the U.S. Flag as a barometer of collective mourning, the level of sadness in Arizona dipped dramatically in 2018.

Certainly, the country and state had many losses to mourn during the past year, including the deaths of a former U.S. President, a longtime Arizona Senator, a former Arizona Congressman, and a former First Lady.

In addition, more than 50 people around the nation died in multiple major mass shootings, each of which was mourned by flags at half-staff.

Also during 2018, Arizona lost six U.S. servicemen who had been deployed around the world, as well as four public safety officers who died in the line of duty.

All of those losses resulted in more than 85 days of lowered flags in Arizona – nearly one-fourth of 2018. That is considerably more than in previous years. On the national level, 2018 had 67 days with flags lowered by presidential decree. That compares with about 15 days of national mourning in 2017, and 55 in 2016.

And on the state level, Arizona Gov. Doug Ducey designated more than 20 days of mourning in 2018, compared with about a half-dozen similar designations the year before.

About one-third of the time of mourning in 2018 was attributed to the Nov. 30 death of former U.S. President George H.W. Bush. In coordination with presidential proclamation by President Donald Trump and by order of Ducey, flags were at half-staff for Bush for 30 days – from Dec. 1 through Dec. 30.

According to the U.S. Department of Veterans Affairs, the time of mourning for a U.S. President was set in 1954 by a proclamation by then-President Dwight Eisenhower, who issued the proper times for flying the flag at half-staff.

“The flag should fly at half-staff for 30 days at all federal buildings, grounds, and naval vessels throughout the United States and its territories and possessions after the death of a president or a former president,” states information on the Department of Veterans Affairs website.

For the vice president, chief justice of the U.S. Supreme Court, or speaker of the House of Representatives, the number of days of mourning would be 10, and for a U.S. Senator or Representative, flags would be at half-staff for at least the day of the death and the day after.

After the Aug. 25, 2018 death of Arizona U.S. Sen. John McCain, five days of national mourning were ordered by presidential decree, and Ducey ordered flags in the state to be lowered until McCain’s interment, which occurred on Sept. 2.

Other presidential decrees in 2018 ordered flags to be flown at half-staff for:

• The mass shootings at the Marjory Stoneman Douglas High School in Parkland, Florida; the Santa Fe High School in Santa Fe, Texas; the Capital Gazette newspaper in Annapolis, Maryland; the Tree of Life Synagogue in Pittsburgh; and the Borderline Bar and Grill in Thousand Oaks, California.

The regulations on when a flag should be flown at half-staff also allow state governors to designate mourning days for local remembrances.

Throughout 2018, Ducey designated more than 20 such days to commemorate the deaths and burials of a former Arizona Congressman, a number of Arizona-born servicemen who died while they were serving the U.S., and local and state public-safety personnel who died in the line of duty.

Among those honored by Ducey’s order were:

• Army Specialist Robert W. Jones from Vail, Arizona, who died while on assignment with the 18th Military Police Brigade in Kosovo.

• 1st Sgt. Nicholas S. Amsberry from Mesa, who died in Germany while deployed to the Joint Multinational Readiness Center in support of Operation Atlantic Resolve.

• Staff Sgt. Alexander W. Conrad, who died in June in support of Operation Octave in Somalia.

• The five-year mark of the June 2013 deaths of 19 Granite Mountain Hotshots.

• Captain Juston Doherty, who died in July while on weekend drills with the Arizona National Guard.

• State Trooper Tyler Edenhofer, who was shot and killed in the line of duty in July.

• Deputy U.S. Marshal Chase White who was killed in the line of duty in Tucson in November.