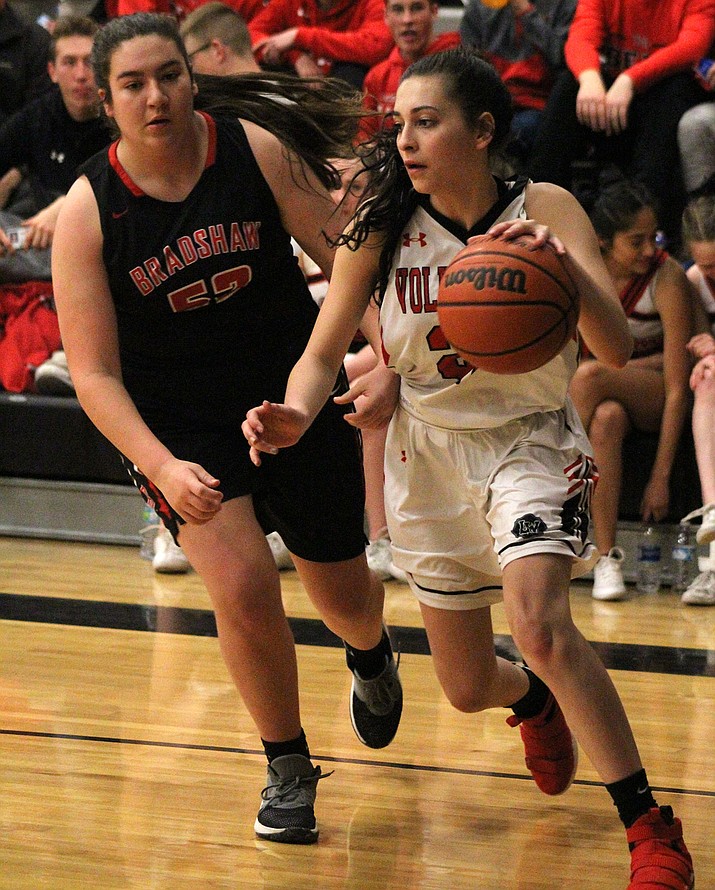 It may have taken six meetings to accomplish the feat, but the Lady Vols picked up their first win in program history over the Lady Bears in a 41-28 victory.

“At least since I’ve been coaching, we haven’t beat them,” said Lee Williams head coach Jerry Arave. “So I don’t know – this might be a first. We haven’t beaten Bradshaw Mountain. This was big for us.”

And the Lady Vols did it with teamwork as nine different players scored at least two points. Hayle Davis led the way with 11 points, but the hero of the night was Ellie Thomas. The senior finished with eight points – all in the second half.

“She played outstanding,” Arave said of Thomas. “We thought she had two fouls and she really only had one. So we sat her out the whole first half. But I’m glad I did that because it left her with four fouls to give in the second half.

“She was a lot more aggressive than she normally is,” Arave continued. “I told her she needs to score more. She needs to shoot more. And she stepped up.”

Thomas wasn’t the only one to step up and contribute though. Lee Williams turned to its defense in crunch time and it paid dividends. The Lady Vols only allowed No. 15 ranked Bradshaw Mountain to tally 10 points in the second half – including four points in the third quarter.

Even more impressive was the fact Lee Williams outscored the Lady Bears by a 17-6 margin in the fourth.

“Hayle Davis was outstanding defensively and offensively,” Arave said. “It looks like she led us in scoring again. She played really, really good defense. Kaylee Bond had to D up No. 23 (Rylee Bundrick) – their big girl – and she played her pretty well. She only scored two points the whole second half.”

Arave made sure to also mention that Hallie Powell split time guarding Bundrick and was instrumental in her low-scoring second half.

However, the momentum was up for grabs entering the final quarter as Lee Williams held a slim two-point lead, 24-22.

That quickly changed in the fourth as Lia Lucero nailed a 3-pointer to give the Lady Vols some breathing room.

Bradshaw Mountain inched back within two with a trey, but following LaNae Burgess making one-of-two at the charity stripe, Cronk nailed a dagger 3 that sparked the offense on the way to the upset of the Lady Bears (8-6, 6-3 4A Grand Canyon Region).

“I told them this week, ‘When Bradshaw Mountain and Coconino come to our place, we have to win one of those games,’” Arave said. “‘We have to win a game that no one thinks we can win.' We didn’t beat Coconino, but we came close. We stepped up tonight and did the job.”

Other top performers Tuesday included Liberty Cronk with five points and the trio of Bond, Powell and Lucero finishing with four points each.

“I’ve told the girls, ‘If we take care of the ball and make the shots we’re supposed to make, the little chippies or the layups, we’re going to win or be tough to beat,’” Arave said. “The last two games – even against Coconino when we lost – the second, third and fourth quarter, we did that.”