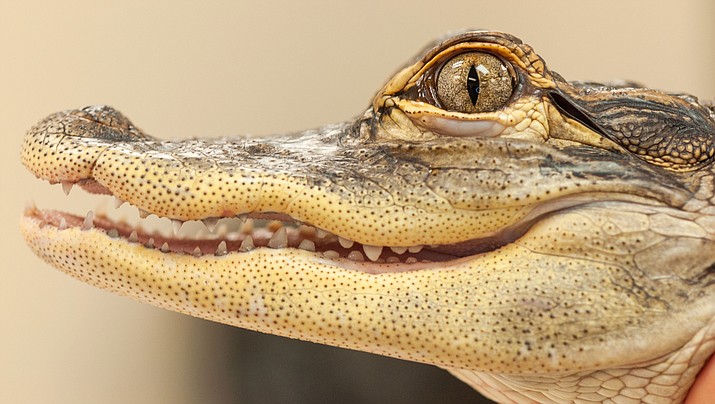 “I had Wally, and when I came home and was around him, it was all OK,” he said. “My doctor knew about Wally and figured it works, so why not?”

Wally was rescued from outside Orlando at 14 months old and is still growing; Henney said Wally could be 16 feet long one day. Henney says Wally eats chicken wings and shares an indoor plastic pond with a smaller rescue alligator named Scrappy.

Wally, who turns 4 this year, is a big teddy bear, in Henney’s words. The cold-blooded reptile likes to rest his snout on Henney’s, and “he likes to give hugs,” he said.

The alligator has never bitten anyone and is even afraid of cats, according to Henney.

Henney acknowledged that Wally is still a dangerous wild animal and could probably tear his arm off, but says he’s never been afraid of him.

Henney’s background also indicates a comfort with creatures like Wally. He hosted a show called “Joie Henney’s Outdoors” on ESPN Outdoors from 1989 to 2000, according to the York Daily Record .

Henney frequently takes Wally out for meet-and-greets at places like senior centers and minor-league baseball games.

“He’s just like a dog,” Henney told a woman at a recent outing to a senior center. “He wants to be loved and petted.”

GALVESTON, Texas – Police in coastal Texas have captured a pair of runaway emus that had been on the lam for a day after escaping from their owner’s backyard.

Emus aren’t permitted in Galveston, but police say a man recently brought the large, flightless birds to the island after the death of his mother. She’d owned them at her home near Houston.

Officials say the birds’ owner didn’t realize Galveston had a ban on emus and that he’s working with authorities to find an off-island home for them.

SAN JOSE, Calif. – Two cats are living large at a $1,500-a-month studio apartment their owner rents for them in Silicon Valley, where a housing shortage has sent rents skyrocketing.

The Mercury News reports the 20-pound cats named Tina and Louise moved to the studio in San Jose after their owner moved away to college.

The student’s father, Troy Good, was unable to keep them and asked friend David Callisch to rent him the kitchen-less studio so he could keep his daughter’s beloved cats.

The newspaper reports Good and his cats got a decent deal because an average studio apartment in San Jose rents for $1,951 a month, according to RentCafe.