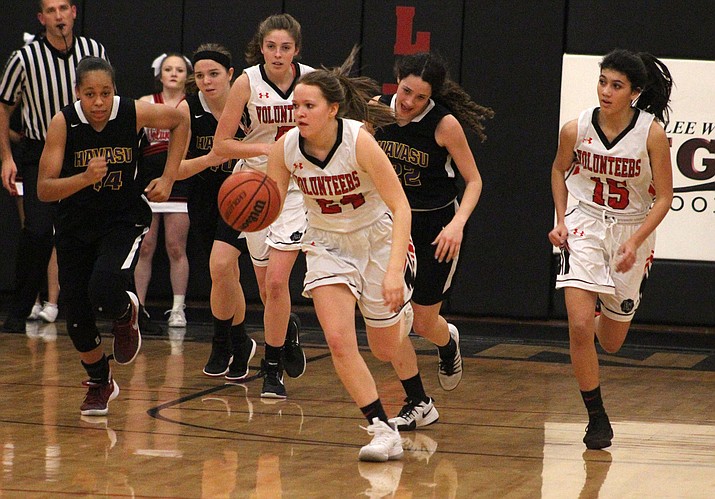 KINGMAN – Three games in one week is never easy, especially when two of them are against non-region opponents. But that didn’t stop the Lee Williams High School girls basketball team Thursday night in a 50-40 victory over Lake Havasu.

“It was a great team effort and we played great defense,” said Lady Vols head coach Jerry Arave. “We had some kids step up. Lia Lucero played really well. She had six points. Hayle Davis – she’s my rock. I put her in and what does she do? Get a steal right away and make a layup. She played outstanding, but everyone chipped in.”

Davis led the way with 12 points, highlighted by a 10-point second half, while Kaylee Bond and Liberty Cronk each scored seven. All 12 Lady Vols entered the game and nine finished with at least two points.

Lee Williams once again depended on its pressure defense and that carried over to the offensive end.

That was especially the case at the charity stripe during the first half. The Lady Vols converted 10-of-12, while Lake Havasu was just 1-of-2.

“That was really big,” Arave said of the first half free-throw shooting.

It paid dividends on the scoreboard as Lee Williams held a 26-13 halftime lead and held on to it 37-24 entering the final quarter.

But Matisun Skirvin and the 36th-ranked Lady Knights (2-12) weren’t going to go down without a fight. Skirvin found her groove in the fourth quarter tallying nine of her game-high 21 points to keep her team in striking distance.

“We kind of went to what we call our ‘zombie defense’ where we just hawk her,” Arave said of Skirvin. “No matter what, we stayed with her. It worked for a while, but she’s a good ballplayer.”

It was too little, too late though as the Lady Vols did what they needed to pick up another victory at home.

“We’ve won six games at home,” Arave said. “We’re playing really well and today we put four quarters together. We didn’t sit back. We came to play and we didn’t turn the ball over a ton of times. We really played four solid quarters.”

“I don’t know how much gas the girls are going to have – two really emotional games this week,” Arave said. “So we’ll see. Greenway is ranked No. 16. It’ll be a good test for us.”

At Chino Valley, it took a strong second half but the Lady Bulldogs kept their winning streak alive Thursday in a 42-39 victory over No. 30 ranked Chino Valley (6-8, 1-5 3A West Region).

The Lady Bulldogs found themselves trailing 20-17 at halftime, but rallied back with 15 points in the third and 10 more in the fourth to tally their 12th straight win.

At Lake Havasu, the Volunteers bounced back from a tough loss earlier in the week as they cruised to a 64-49 victory over the 23rd-ranked Knights (6-8) Thursday night.

At Chino Valley, it was another tough outing for the Bulldogs Thursday night as they dropped their six straight loss in a 66-49 setback to the 31st-ranked Cougars (8-6, 2-4 3A West Region).