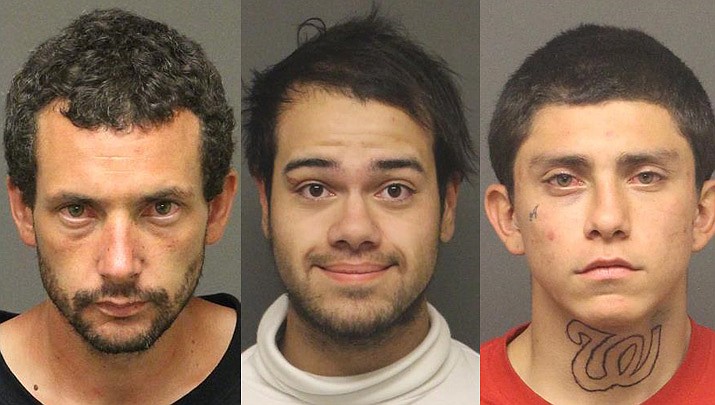 A traffic stop in which a stolen Jeep was being driven led to the arrest of a Kingman man on burglary and stolen property charges, according to the Mohave County Sheriff’s Office.

A vehicle was on fire near the Thompson Wash at Grace Neal Parkway Monday, Jan. 21 and was fully engulfed when deputies arrived.

After the fire was put out, deputies did a records check of the VIN on the vehicle. Deputies learned the vehicle was usually kept at a private hangar at Kingman Municipal Airport.

At the airport, law enforcement found a chain-link fence that was cut and knocked down. Deputies also located tracks, which led to a hangar that was not accessible from the street. They noticed the door had been pried open, and the hangar appeared to have been ransacked.

The owners told deputies two vehicles, a handgun, specialty tools, knives, and batteries had been removed from the hangar.

One of the stolen vehicles was the one that had been on fire.

Two days later on Wednesday, Jan. 23, a Department of Public Safety trooper pulled a Jeep over for a traffic stop in the 3700 block of Diagonal Way and was detaining two individuals.

Ruben Cesar Lopez, 35, of Kingman, was the driver. He was taken into custody.

MCSO reports the investigation revealed Lopez allegedly committed the burglary and took the vehicles and other items from the airport hangar.

Lopez was arrested on burglary in third degree – unlawful entry, and theft-control of stolen property, both felonies. Lopez was taken to Mohave County jail.

The incident is still under investigation.

Several citizens came to the rescue after hearing cries for help from an 86-year-old woman Wednesday in the 3300 block of North Stockton Hill Road, police said.

Brian Keith Hobbs, 34, a Kingman-area transient, was detained by the citizens after they saw Hobbs stealing a purse from an elderly woman in a parking lot. The citizens held Hobbs down until Kingman Police arrived at the scene.

KPD reported that Hobbs was riding a bicycle near the victim’s shopping cart in which she had set her purse down. Hobbs allegedly grabbed the purse, and the cart was pushed into the victim.

The victim yelled for help, and the citizens came over and stopped Hobbs. He purportedly bit one of the citizens in the hand and tried to punch and fight his way out of the predicament.

KPD said Hobbs admitted his involvement and it was because of a drug addiction.

Hobbs was arrested for robbery, possession of narcotic drugs, and possession of drug paraphernalia, all felonies, and misdemeanor assault. He was taken to Mohave County jail.

An 80-year-old woman is in serious condition at Sunrise Medical Center in Las Vegas after being the victim of an armed robbery Wednesday evening, police said.

Kingman Police Department reported the robbery occurred in the parking lot of a business in the 3900 block of North Stockton Hill Road at about 7:05 p.m. on Jan. 23.

The suspect is alleged to have struck the woman in the face as her purse was being stolen. The victim was first taken to Kingman Regional Medical Center before being transported to Las Vegas.

Authorities say a man was grabbed by a Kingman Police officer and then tried to punch the officer before being taken into custody Tuesday morning.

KPD received a call about a suspicious person inside of a parked vehicle in the 3600 block of Burbank Street. Officers report that upon arrival, Brandon Stott Jr., 24, of Kingman, was found sitting inside a vehicle that was parked in a fenced yard.

Stott appeared to be having a medical incident and paramedics were assessing his condition when Stott took off on foot. The KPD officer grabbed Stott, who then threw a punch at the officer.

Stott was taken into custody, and the officers reported that Stott had entered two parked cars, which were not his. Stott also purportedly was found to be in possession of paraphernalia used for methamphetamine.

Stott was arrested for burglary in the third degree, possession of drug paraphernalia, aggravated assault on an officer, and resisting arrest – physical force. He was taken to Mohave County jail. 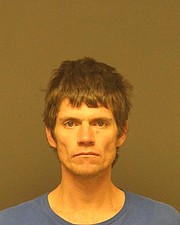 Kingman Police Department officers arrested Justin Cory Brzezinski, 30 of Kingman for felony charges of possession of dangerous drugs, possession of drug paraphernalia and misdemeanor of driving while having a suspended license.

Brzezinski was the drivers of a vehicle stopped for a traffic violation and officers later discovered his license was suspended.

After being taken into custody, officers discovered Brzezinski allegedly had about 10 grams of methamphetamine and associated drug paraphernalia.

Brzezinski was arrested and booked into Mohave County Adult Detention Facility and the vehicle he was driving was impounded.

Prior to arrival, one of the multiple reporting parties advised that her son was being held captive/hostage by people with guns at the reported location. The reporting party advised she had heard a gunshot and then the line disconnected.

Shortly after, deputies and the LHCPD arrived on scene and discovered several members leaving the area of the intersection. The members advised that while they had been in the desert for a bonfire and that another group of people started shooting at them.

Further investigation revealed that the reported information was false and the two involved parties were only involved in a verbal argument with no criminal violations occurring.

Authorities say a 28-year-old Kingman man pushed a female victim down and a young child was shoved against a wall at a residence in the 3700 block of Shaeffer Avenue on Friday night.

Mohave County Sheriff’s Office deputies arrived at the home regarding a domestic violence situation. While the deputies were en route, they reported seeing a male subject, later identified as Deray Sonson Smith, walking away from the residence.

Deputies made contact with Smith, who reportedly said he had left the residence five minutes before meeting the deputies.

The adult female victim told deputies she was out, and when she returned home the house was a mess and she saw holes in the ceiling. The victim confronted Smith and told him to leave. She said Smith pushed her down and was yelling at her.

The victim’s daughter yelled at Smith to stop and was also shoved down by Smith. The child hit her head against a wall, according to the statement. MCSO reported the victim’s statements were confirmed by an interview with the child.

Smith was arrested for assault, aggravated assault, disorderly conduct, and criminal damage. All charges are felonies and per aggravated domestic violence.

Smith was taken to Mohave County jail without incident. 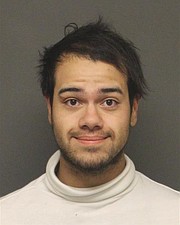 Deputies responded to a roll-over accident in the area of Lomita Street and Neal Avenue involving a side-by-side vehicle. The reporting party stated the male driver flipped the vehicle over and left the scene heading toward Jagerson Avenue.

Deputies located the vehicle and conducted a traffic stop in the 2200 block of Devlin Avenue and made contact with the driver, identified as Angelos.

He was booked into Mohave County Jail without incident. 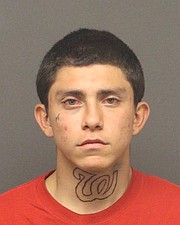 At approximately 2:20 p.m. Wednesday, Jan. 16, deputies responded to 8000 block of Green Valley Road in Mohave Valley in reference to a suspicious male subject.

Upon arrival, deputies made contact with Alfaro, who was observed going through bags in a dumpster.

A records check on Alfaro revealed an active warrant and was detained. A pat search revealed 0.3 grams of methamphetamine in his pocket and a syringe in his backpack. Julio Cesar Alfaro was arrested and booked into Mohave County Jail without incident.