‘Serenity’ good for McConaughey fans, not drama or thriller fans 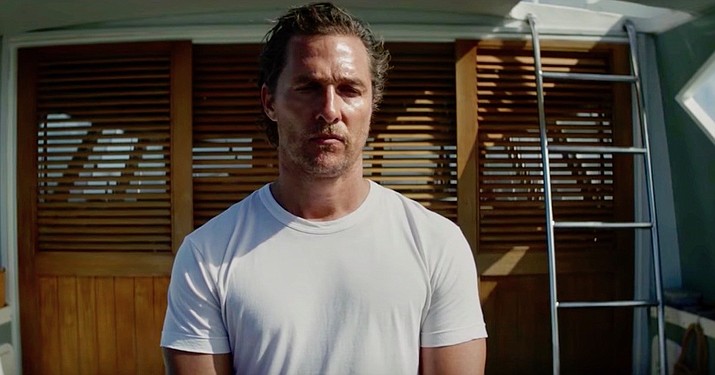 Matthew McConaughey is back with another feature dipped in his special brand of Southern fried gristle. McConaughey excels in films that drip with humidity and damp shirts. Fans will be thrilled that he’s put on weight and re-muscled his physique for this season’s Best Cinematography Award which goes to close-up shots of Mac’s well-buttered bootie biscuits. Fans prepare to swoon over his naked, deep sea tush-push swimming scenes and a sex scene so hot that you can smell the crawfish and shrimp steaming. “Serenity” is an ambitious and bold gumbo of Oscar-winning sweethearts but the three interlaced plots will leave some intrigued and others bored to screams.

1) Moby Dill: “Serenity” finds our grizzled goldilocks, Baker Dill (McConaughey), on the island of Plymouth going all Captain Ahab on a monster tuna, he’s named Dick Justice. When he’s not obsessed with oversized seafood, he runs tours from his boat or catches swordfish for hire with his buddy and first mate, Duke (Djimon Hounsou). The bills are due, the boat is about to get repo’d but Dill is all Hakuna Matata about dodging society and enjoys late night cat calls with the Island’s seductress (Diane Lane).

2) Killer for Hire: One day, Dill’s ex-wife comes to visit with a macabre request. Channeling her best 1920s silver screen starlet, a horribly blonde Anne Hathaway glides breathlessly into the scene as a distressed damsel. She married a jack-ass who is beating her and Dill’s young son. She offers Dill $10 million to kill her husband.

3) Just My Imagination: Dill’s young son, Patrick (Rafael Sayegh), spends his days coding and playing a fishing game to cope with his step-father’s abuse. He shares a special telepathic bond with Dill ... but apparently not so great that Dill wants joint custody or makes phone calls.

The film has a nice pacing and is predictable as Dill wastes precious time and money chasing Justice, which craftily parallels his son’s pursuit of justice in dealing with his step-father’s abuse. We all know that Hollywood films make simple life choices extra-ordinary. Rather than giving Dill custody of his son or hiring a proper hit-man to kill the abusive husband, the audience is forced to endure Dill’s wrangling with his internal locus of control as the island neighbors implore him to do the right thing – don’t kill the husband – and “catch that fish.” He isn’t swayed into taking the $10 mil. until he receives a bizarre bootie call from the ex and several telepathic messages from his son, or so we are led to believe. There is a major twist at the middle of the film which reveals that Dill and his son were intimately attached in the son’s imagination. Sci-fi fans will detect the switch instantly and debate whether we are in Dill’s imagination or Patrick’s or both. Thriller fans may find it to be too far of a stretch for their taste. Drama fans may be willing to accept the intricacies of the existential possibilities and action fans will be outraged with disappointment.

McConaughey is one of the few actors who can act in an entire film by himself. He really doesn’t need co-stars. The Mac will rise up out of some body of water, shake his biscuits, slick back his locks and run 2-hours in a chicken-fried soliloquy that will earn an Oscar. If you love watching the Mac work ... naked and dripping wet, your sensual savors will rise like fresh cornbread. His acting – and nakedness – knows no equal.

Hathaway fans never seem disappointed by her ever-teen glow. This is far from her best role and her portrayal of a woman enduring domestic violence comes across as manipulative and hokey. The ringer in this film is her husband, “Mudbound” lead, Jason Clarke. He brings a gregarious, selfish glee to being an abusive husband. It’s a depraved pleasure to watch him deliver a creepy 50 Shades of Abuse scene.

Newcomer, Sayegh, only has one line – a battered mantra that he delivers to his step-father – about following rules, that parallels Dills frustration with his neighbors’ intrusive gossip: “If I didn’t fish all day, I’d figure out a way to kill you.” One line delivered with the full ominous predictability that will lead this lad to a future in horror or dramas. Djimon Hounsou is a superb actor but, sadly, his role was a filler that could have been replaced with a loyal Golden Retriever, mermaidman, imaginary friend, etc.

“Serenity” is a fascinating premise that may hold the attention of a few but others may need an antacid to endure this seafood fest of a choppy tale.

Mac Fans: 4 out of 5 Seafood Nights at Aquarius Casino

People who need clear cut films that are marketed accurately: 1 out of 5 Seafood Buffets

‘Glass’ is No. 1 again, McConaughey’s ‘Serenity’ flops
‘Zombieland: Double Tap’ is so simple it’s satisfying
‘I Can Only Imagine’ strays from source material, still OK
‘Bumblebee’ great for Transformers fans and families
'Ride Along 2' filled with funny mayhem