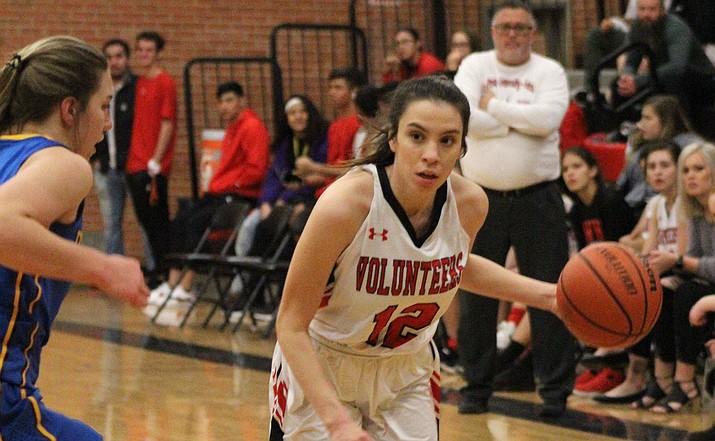 KINGMAN – A three-point first quarter could have proven costly on the road Tuesday, but the Lee Williams High School girls basketball team made sure it didn’t in a 33-28 win over Prescott.

The Lady Vols trailed 14-13 at halftime, but used a 14-point third quarter to pull away. Liberty Cronk and Lia Lucero sank consecutive 3-pointers to give Lee Williams a 27-20 advantage over the No. 26 ranked Lady Badgers (6-10, 4-6 4A Grand Canyon Region).

At River Valley, the Lady Tigers won their third straight game Tuesday in a convincing 58-34 victory over the 35th-ranked Lady Dust Devils (5-11, 2-6 3A West Region).

At Prescott, the Volunteers played its first of back-to-back region games Tuesday night and picked up a 50-42 win over 39th-ranked Badgers (2-14, 2-8 4A Grand Canyon Region).

At River Valley, the Bulldogs concluded the regular season on a high note Tuesday night with a 5-3 win over the Dust Devils.

Caleb Grimmett, Caydyn Pettway, Alex Cardenas, Alejandro Canales and Christain Clever each tallied a goal as No. 43 ranked Kingman finishes with an overall record of 3-9 and a 3-4 mark in the 3A Northwest Region.

At KHS, the Lady Bulldogs couldn’t cap the regular season with a victory Tuesday in a 4-3 setback to the Lady Dust Devils.

Abbie Colvig, Abigail Ford and Esther Torres scored goals for No. 38 ranked Kingman. The Lady Bulldogs conclude the season with an overall record of 1-10 and 0-5 in the 3A Northwest Region.