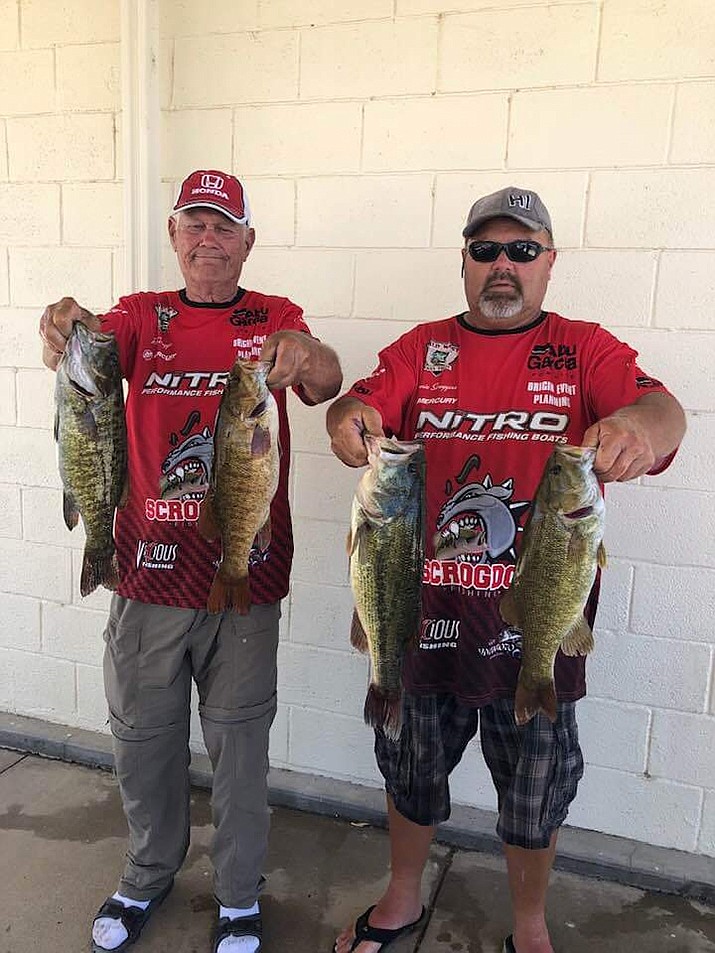 Ray and Donnie Scroggins was the top Kingman team in the club’s Open Tournament at Lake Mohave. (Photo special to the Miner)

KINGMAN – The Kingman Bass Club held its first open bass tournament at Lake Mohave on Sunday, and though they had a good turnout, KBC president Donnie Scroggins promises that next year it will be bigger and better.

KBC is a nonprofit organization and as such relies on member fees to keep opportunities open for local bass anglers to compete on a club level while improving their skills.

On Sunday, the club conducted a one-day tournament at Lake Mohave in which all teams of bass anglers were allowed to enter. There were no club fees to pay, but there was a modest fee that teams paid to enter the event.

Besides paying teams that finished in the top five spots, KBC also had two separate option jackpots that anglers entered. They could pay to enter the big largemouth and big smallmouth jackpot.

Even though a bass club in Las Vegas promised to send a large number of teams to the event, Scroggins said just a few showed up. The ones that did showed local anglers that they know the lake and the fishery well. They took the top five spots in the event.

The top team was Danny and Logan Branscun, who weighed in a five bass limit of 17.99 pounds. The team also took home the biggest smallmouth jackpot, too, with a lunker that weighed 4.72, and was the largest fish weighed in during the tournament.

According to Scroggins, the Branscuns told the other anglers they caught most of their bass on top water lures, including the huge smallmouth.

Second place was won by the team of Dean and Ryan Yamagata, whose fiber fish stringer weighed 15.74.

Third place was won by Gildarido Gollas and Mark Doren. Their limit of bass checked in at 14.53.

Fourth place was taken by the team of Kona Borja and Robert Gochicoa. Their bag weighed 14.53.

Toby Robinson and Aaron Corones garnered fifth place, weighing in a limit that pushed the scales to 14.2.

The top team for the KBC was Donnie and Ray Scroggins, who despite having a lunker largemouth that weighed 4.13 that won second big-fish money in the largemouth division, that team finished in sixth place.

As Scroggins put it, “First team out of the money!”

Scroggins said he caught the big largemouth on a top water lure, too.

Dave and Shannon Hilton of Kingman took the top largemouth honors with a lunker that weighed 4.61.

The second largest smallmouth was caught by Vegas anglers Charles and Donithan Schmidt. That fish weighed 3.98.

Scroggins noted that out of the 19 teams that were entered in the tournament, 12 brought in a five-fish limit. One team had four fish, while three teams brought in three bass.

All the bass were released after they were weighed in.

Scroggins notes this event had a number of sponsors who donated prizes that were given away in a drawing to event participants.

“The money we raised from the (drawing) will be used to upgrade the club’s weigh-in scales and to get us a banner,” Scroggins said. 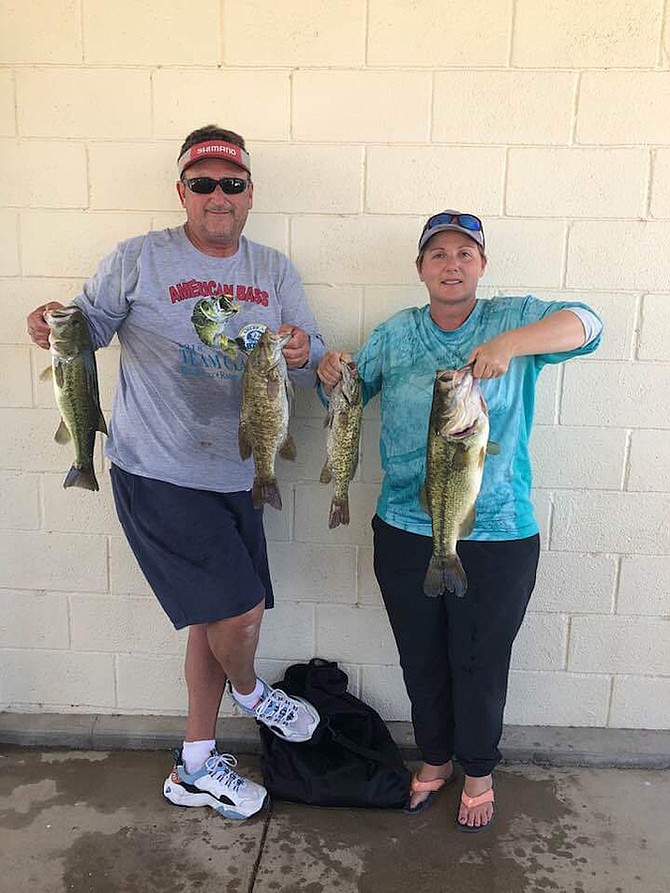 Dave and Shannon Hilton had the biggest largemouth bass of the KBC Open Tourament. The bass weighed 4.61 pounds. (Photo special to the Miner)