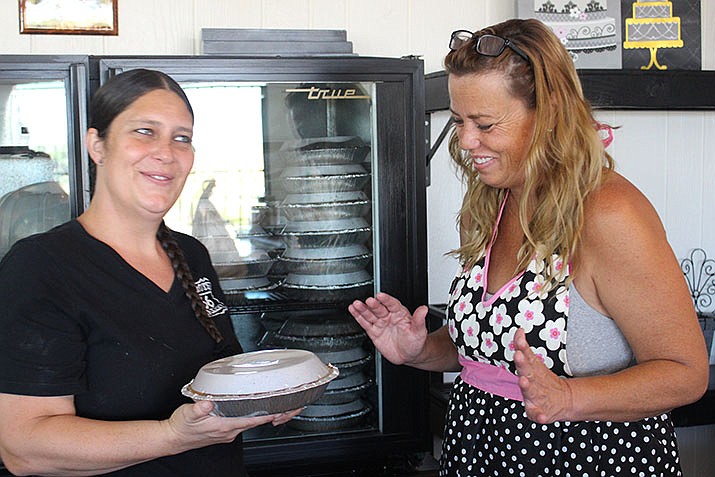 Christina Schauer and one of her bakers on the second day after the opening. (Photo by Agata Popeda/Daily Miner)

“And this just a beginning,” said owner Christina Schauer on the second day of being open for business, overwhelmed but happy and out of doughnuts because she spent the morning baking 30 pies for the Fourth of July Extravaganza. But Schauer is already thinking about throwing Aloha Fridays: teriyaki chicken, shredded cabbage, and steamed rice.

It was June 12, 2009 and Christina Schauer was driving down Stockton Hill Road looking for a house for her family. She just made a decision to move here with her teenage girls from California. She was tired and craving a cup of coffee and a sweet pick-me-up.

Schauer opened one in 2014, also on Andy Devine, but the partnership with another businessman didn’t go well. Since then, she has been catering to convenience stores, working on her recipes and looking for another building to start producing again.

“I feel that many bakeries produce, but they don’t produce flavor,” Schauer said. “We like our customers and listen to what they say about texture and softness.”

When Schauer was 7, she was living with her father in a huge apartment complex. One day she decided to bake cookies and sold them to neighbors. She made $20 bucks for the whole tray. Later she studied hotel management and went to bakers school. Originally, she’s from Hawaii but used to work at the Don Laughlin’s Riverside Resort Hotel and Casino in Laughlin and attended Mohave Community College.

“I thought Kingman was such a cute town. I wanted my girls to be able to walk on the street and feel comfortable. A small town, USA instead of L.A.,” she said.

Visit Bakery 66 for French bread, sourdough and rye specialty breads (available in a couple of weeks), try fabulous 66 buns, and their mini cupcakes with toasted coconut and macadamia nuts.

“We bake everything here,” Schauer said. “Nothing is brought in frozen.”