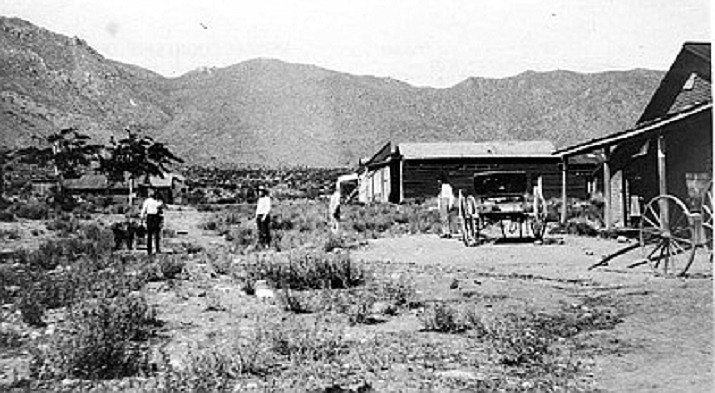 Street in Mineral Park in the 1870’s. (Mohave Museum of History and Arts photo)

In 1869, Michael DeKay, or sometimes referred to as Michael De Hay, was born April 10, 1830 and was a native New Yorker living in Parahnagat Valley, Nevada, over 200 miles from where this story ends.

DeKay met his wife, Esther, in 1856 in Wisconsin after he returned from Minnesota. A year later, he grabbed his family and moved to California where he continued to work as a miner and dabbled in carpentry.

After four years of living on the West Coast, he decided to move to Nevada. The DeKays settled in different areas like Aurora in Esmeralda County, White Pine and Pioche.

While living in Pioche, with his wife and five children, DeKay took advantage of the 84 saloons it had to offer, which didn’t help him with his alcohol problem.

Pioche in the day wasn’t a place where the law was enforced, and DeKay ignored the lawless side of the town. His wife didn’t and wanted a better place to raise her five children, and was expecting another.

Esther insisted they move from Pioche, DeKay gave in and decided to relocate his family to Parahnagat Valley. They lived there from 1868 until August 1875.

After selling his lot for $300 (today being $6,985) in Pioche, a year later he discovered his lot and others around it sold for nearly four times more than what he sold his. This caused him to be filled with anger toward Esther, which led to more drinking and being abusive toward his wife.

While living in Parahnagat, DeKay had to work 60 miles away in the Groom District, apart from his family because he couldn’t find work near his home and his ranch. Just like any man back in the day in this area, he was a miner.

During this time he tried to make a difference for his children by trying to relocate them to Hiko, Nevada, where he was part of a committee to get a school started.

“At this time, when I was filled with bright hopes for the future for my children …,” DeKay said to the Arizona Weekly Miner in 1876.

In August 1875, DeKay returned home to find his wife, children and some of his belongings missing. Esther decided to leave DeKay because she couldn’t bare the abuse she received from him when he was drunk.

Esther left with her children, and with the company of George Suttonfield, a traveler who had stayed a few nights on their ranch. Realizing what happened, DeKay sold his ranch and tracked his family to Mineral Park in the Arizona Territory.

“The man who gave me this information was a constable, who at the same time served a summons on me in favor of Mr. Wilson, a store keeper, for $51, most of which my wife had obtained in supplies just before leaving for Arizona,” DeKay said to the Arizona Weekly Miner in 1876.

Arriving at Mineral Park, DeKay wanted to have Suttonfield prosecuted for kidnapping but failed. Esther stated why she left her husband, and under the law in Mineral Park prevented DeKay from taking his wife back with him to Nevada. 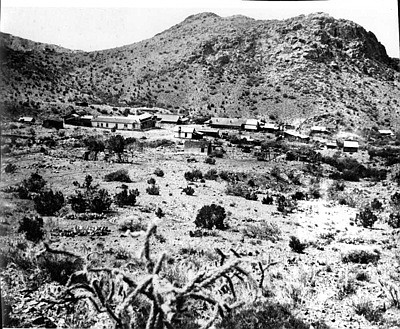 He made it a goal to save his marriage. He bought a house for his family, went to work and decided to quit drinking. He was desperate to get his family back together, so he signed an agreement through an attorney stating that for six months he wouldn’t have matrimonial rights with Esther. If, after the six months he proved to Esther he could remain sober and be a loving husband, then she would return to Nevada with him.

“To all my appeals she turned a deaf ear, continually declaring that she never would resume her martial relations with me. During this time I was informed that she from time to time met Suttonfield at his house,” DeKay said to the Arizona Weekly Miner in 1876.

DeKay picked up the bottle again.

The night of Nov. 5, 1875, DeKay had a little too much to drink. He woke up thinking he saw his wife standing over him with a butcher knife in her hand. Some say she was asleep in the other room with her children and others say she ran back to her room to hide under the blankets.

DeKay grabbed his revolver and shot Esther through the covers hitting her in the temple. Some sources say his children woke up from the shouting and saw their father kill their mother. Others say his daughter heard the firing of the pistol and the cries of the baby so she ran into the street crying for help.

“Her fiendish father ran after her and fired two shots as she ran, it, fortunately, missed his mark,” an article published on Dec. 2, 1875 in The Times from Philadelphia read.

After snapping back from a state of shock, DeKay realized what he did and instantly regretted it. He acted quickly to make the incident look like he was defending himself from his wife. He took her corpse rolled it off the bed and placed a large butcher knife under her.

“When I saw the blood, and saw what I had done, I was horror struck and rushed out of the house, determined to take my own life, and with this intent placed my pistol to my breast and fired twice,” DeKay said to the Arizona Weekly Miner in 1876.

The bullets only wounded him. By this time a large crowd of men surrounded the house, responding to the cries of his daughter. DeKay came out and gave himself up.

Judge Tweed tried DeKay and after 20 hours of the jury deliberating, they came back with a guilty verdict.

At high noon Jan. 14, 1876 in Cerbat, Arizona, which was the county seat at the time, Sheriff Comstock read the execution warrant. Before his death, he prayed for God to have mercy on his soul, and he was the first of his name to die on the gallows.

The black cap was put on him and the rope was adjusted. Rev. Blakeslee offered a prayer and once “Amen” was said, DeKay exclaimed “I’m gone! I’m gone!”

The drop fell and after 20 minutes a doctor came to confirm his death. He was put in a coffin and buried a few yards from the courthouse, making DeKay the first man to be executed in Mohave County.