Meet your Supervisor: Jean Bishop of District 4
“I like it here because anything that is frightening makes noise before it strikes.” 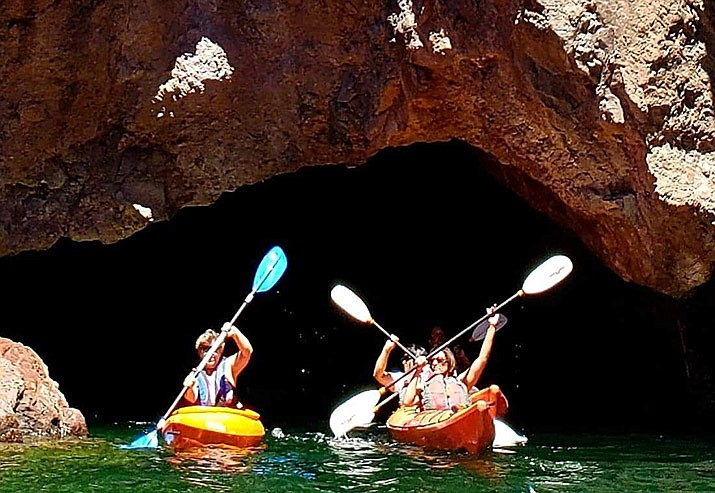 KINGMAN – It was a casual Friday afternoon, right after the Fourth of July celebrations, when Mohave County Supervisor representing District 4, Jean Bishop, spontaneously invited the Daily Miner to her office to talk about the future and the past – both hers and the county’s.

Bishop was born in Las Vegas, but moved to Mohave County when she was a toddler. She has spent most of her life here, except when she went away for school. 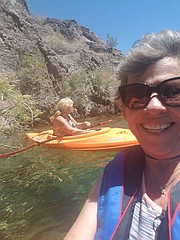 Bishop jokingly called her kayak “Mean Jean.” It is not possible to make everyone happy, she said about being a supervisor. (Courtesy photo)

“I’ve put myself through a police academy back when it was hard for women to get hired by law enforcement,” she said. “Then I moved on to the Mohave County Sheriff’s Office, first working as a jail deputy sheriff, then as a remote deputy sheriff for Golden Valley.”

The 12 years she spent at the sheriff’s office equipped her with a thorough understanding of the department, which explains her back and forth with Mohave County Sheriff Doug Shuster over next year’s budget a couple of months ago.

“The problem is not that we don’t give him enough money,” she said. “We give him more money every year. And he’s not able to use it, so it comes back to the general fund.”

Bishop says the real problem is the fact the sheriff has trouble recruiting young people who will stay here.

“Obviously, we can’t pay as much as in Maricopa and the cities because they have more tax revenue,” she said. “To get someone to come and stay in Mohave County, we have to make them love Mohave County the way we do.”

It is the sheriff’s office where Bishop’s interest in politics originated, too. Her husband, with whom she had lived in the Chloride area for 20 years before moving to Kingman to work as a supervisor, ran for sheriff in 2000 against a popular incumbent.

“That’s when I got interested in politics, watching the back and forth between the candidates,” she said. “Politics is frustrating, interesting and enjoyable, but only if you like people.”

After becoming a supervisor in 2014, Bishop learned about the different areas of the county.

“The communities are so diverse,” she said. “What makes Golden Valley citizens happy will not make Meadview citizens happy. I have this constant battle between different communities, like in a big family.”

Bishop will run again in 2020, but then she will “respectfully retire.” She wants to finish a few projects such as seeing the animal shelter and Interstate-11 built, the latter bringing businesses like “Red Lobster, nice places to shop, maybe a mall,” Bishop said. She also hopes for an animal park with a hotel Jonathan Kraft of Keepers of the Wild wants to build in her district.

Of course, Bishop admits, growth brings “the city feel,” which not everyone enjoys. She likes to spend her weekends in a tiny cabin (no electricity, no water) with her husband and three little dogs.

“You couldn’t ask for better weather,” she said about the Kingman area. “There’re no earthquakes, hurricanes, or tornadoes. I like it here because anything that is frightening makes noise before it strikes. Like rattlesnakes.”

Infrastructure, especially road conditions, remains one of the biggest challenges in Mohave County. Bishop said the county does what it can to systematically repair roads, but the demand is huge. She would be thrilled if President Donald Trump would allocate federal money for infrastructure, as he promised. But if people want paved roads and sidewalks faster, they should consider being taxed. However, Bishop understands her role mainly as expressing the will of her electorate and “taxes are not a popular thing in Mohave County.”

Most of Bishop’s concerns are economy-related. She wants the county to prosper and pay its bills without increasing taxes. That is why she decided to speak against the uranium mining ban near Grand Canyon.

“I believe mining is very different now,” she said, repeating Supervisor Buster Johnson’s claim. “And soon it might be a matter of national security if the countries we take uranium from will stop selling to us.”