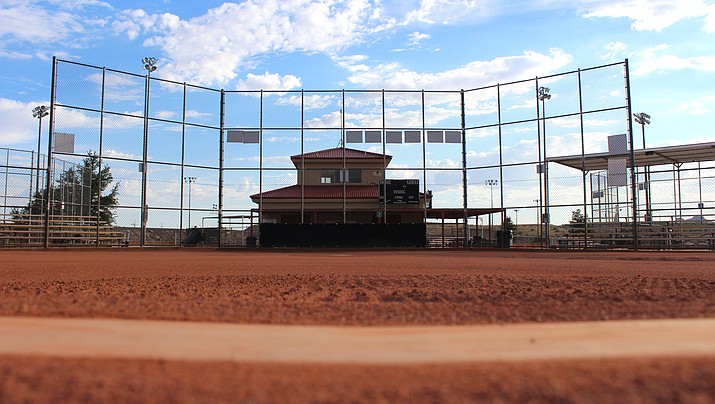 Field No. 4 and Southside Park will host the 2019 Arizona State Little League Tournament beginning Monday. Fourteen districts from Arizona will be represented, trying to earn the one spot to the Western Regionals. (Photo by Beau Bearden/Daily Miner)

KINGMAN – As the old saying goes, there is no rest for the weary.

District 9 Little League Administrator Leigh Pitts knows that feeling all too well after being in charge of a number of All Star Tournaments last month. But Pitts and her staff have one final hurdle to clear – Arizona’s 10-12 Little League State Tournament, which begins Monday at Southside Park, 974 Buchanan St.

Only time will tell how the tourney plays out, but Pitts is focused on making it a positive experience for everyone.

“Hopefully as these teams converge on Kingman, they’ll say ‘Wow, you all did a great job,’” she said. “That’s our hope – to provide a great and memorable tournament for these kids. They can walk away and say, ‘Wow, that was a great tournament.’ Whether they win or lose, we want them to walk away with that good feeling.”

Pitts knew Kingman would host the state tournament in October during one of the annual state Little League meetings. Districts get the chance to host based on a rotation and whether or not they have the facilities necessary for a state tournament.

“The 10-12 State Tournament is always the biggest,” Pitts said. “10-12 always has every district represented – there are 14 districts in Arizona.”

Kingman, unfortunately, will not have a team representing District 9 as Lake Havasu earned that honor by winning the 10-12 All Stars Tournament. Nevertheless, the location will still provide an advantage for all of the teams. 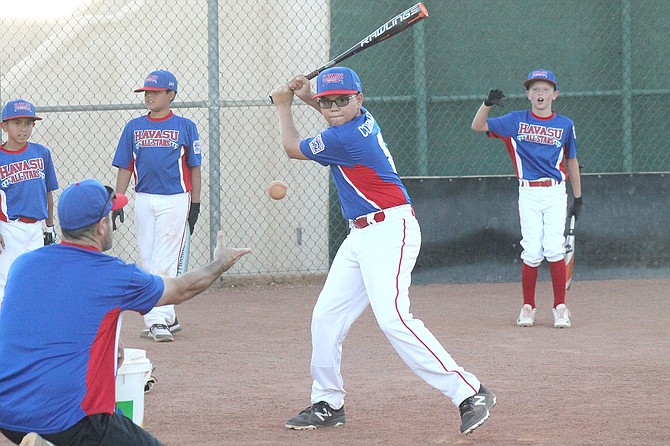 Alejandro Coronado of Lake Havasu’s 10-12 All Star team loads up for a swing during a game of “Over the Line” as his teammates cheer him on at the team’s practice at Sara Park. Havasu will play its first game of the state tournament at 8 p.m. Monday against West Flagstaff. (Photo courtesy of Peter Castillo/Today’s News-Herald)

“The biggest draw for Kingman is the cooler weather,” Pitts said. “These leagues are coming in from Phoenix or Nogales or Tucson or wherever, and they have the opportunity to play in cooler weather. And Kingman also has been good to us when we host a state tournament. Their fields are always pristine. We are always blessed in regards to the City being able to accommodate us for those days we host the tournament here.”

Yvonne Cossio, Kingman Parks and Recreation Superintendent, is in charge of making sure Southside Park is in tip-top shape. However, it hasn’t been a frenzy of preparation as the facilities are taken care throughout the year.

“We usually keep the fields up so they’re ready,” Cossio said. “We work on them on a regular basis. There’s nothing special that has to be done. Although, we tend to do an extra run to make sure everything is clean and picked up around the facility.”

And come Monday night, those duties will increase with a number of visitors stepping foot in Southside Park. But there are positives to more people visiting the city.

“Usually when we have tournaments, it definitely brings people to town,” said Josh Noble, Tourism Services Manager. “It makes an impact, but I won’t know until after the tournament.”

That impact will be felt citywide during the two weeks of baseball action. However, Pitts knows it wouldn’t be possible without the help of others.

“I really have to give kudos to some people who helped put this tournament together.” Pitts said. “Lyndsey Simpson, Steve Petrausche, Shelley Stanley and Larry Carver.”

That group can’t do it all though and there are other areas where Pitts needs individuals to step up to the plate.

“We are always looking for volunteers,” she said. “We’re looking for announcers, people to help with the scoreboard, help in the concession stand and help greeting people. If you know someone who has always wanted to announce a ballgame, come on down – we can put you to work. We have lots of opportunities for them. We’ll always provide hots dogs or whatever you’d like at the concession stand to fill your bellies.”