Lawsuit takes aim at statute that can quash initiative petition 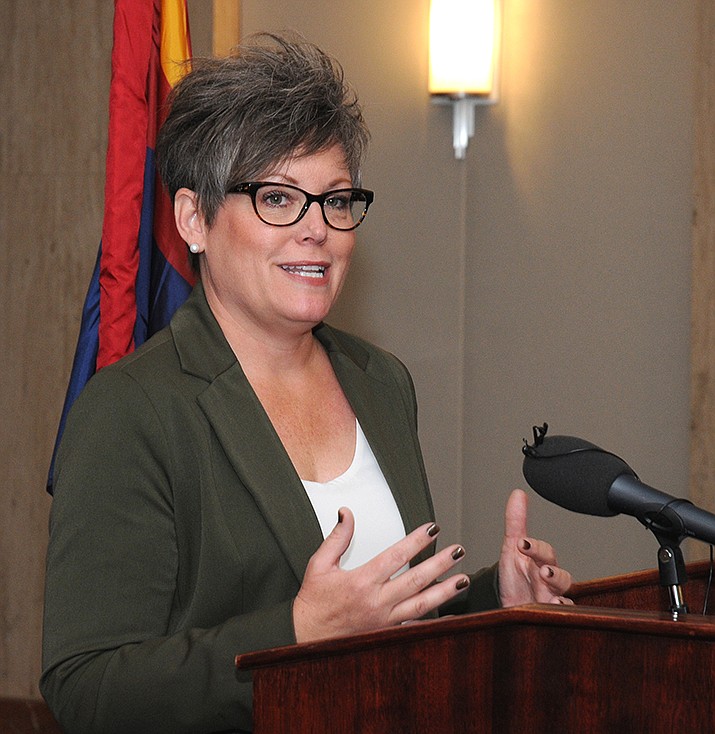 Secretary of State Katie Hobbs on Nov. 19, 2018 prior to taking office soon after winning election. A lawsuit is attempting to block a statute from being enacted that can invalidate qualified signatures on an initiative petition. (Capitol Media Services photo by Howard Fischer)

PHOENIX – A new lawsuit seeks to strike down a statute that can invalidate otherwise legitimate and qualified signatures on an initiative petition.

Attorney Sarah Gonski said the requirement unconstitutionally “discourages the people of Arizona ... from exercising their fundamental right to make law without consulting the Legislature.’’ She is asking U.S. District Court Judge Susan Bolton to block Secretary of State Katie Hobbs from enforcing the requirement.

Gonski may have an uphill battle.

The statute in question was upheld just this past year by the Arizona Supreme Court. But Gonski is trying a different path of attack, alleging that it runs afoul of protections in the U.S. Constitution.

Arizonans can propose their own constitutional amendments and laws by gathering enough signatures to put the issue directly to voters.

The 2014 law, which passed without significant debate, spells out that paid circulators and those who do not live in Arizona must first register with the Secretary of State or their signatures collected do not count.

More significant, it allows those trying to keep a measure off the ballot to subpoena those circulators. And if any circulator who has to register does not show up, then all the signatures that person gathered can be struck, potentially leaving the petition drive short of its goal.

One of the plaintiffs is Next Gen Climate Action Committee, which pushed an unsuccessful measure last year to impose new renewable energy mandates on utilities. Gonski, arguing on behalf of the organization, said the statute has taken its toll, citing the experience of Jessica Miracle, a paid petition circulator on that measure.

Subpoenaed by foes of the measure, the lawsuit says Miracle could not attend because her children were sick, she did not have her own transportation to Phoenix, and no one would tell her clearly how many days she would need to be in Phoenix.

The result, according to Gonski, was that all of the 2,604 signatures Miracle gathered were invalidated.

Gonski said the law is not just unfair to circulators.

One of the plaintiffs in the lawsuit is Mary Katz, listed as a Phoenix resident and registered voter.

According to Gonski, Katz signed that renewable energy measure.

“But her signatures was later invalidated when the circulator who witnessed it was unable to appear in court when subpoenaed,’’ the lawsuit states. And Gonski said Katz was not told until long after the election that her signature has been invalidated, meaning there was no way for her to go to court to tell the judge that it was, indeed, a valid signature.

The other key plaintiff in the case is Arizonans for Fair Lending, which is currently circulating petitions to enact a law to outlaw title loans. Rod McLeod, who is managing that campaign, said the law has now become a tool for challengers to use to keep measures opposed by certain business interests from ever getting to voters.

He pointed out that challengers to the renewable energy measure issued subpoenas for about 1,180 circulators. McLeod said it was clear from the start there was no way they were going to question that many people in the one week the judge had set aside for trial.

In fact, Gonski said, out of the 913 circulators who appeared, 872 were sent home without ever being asked a single question about their work.

McLeod said challengers know that, using the massive subpoenas “just for intimidation’’ in hopes to that some people would not show up, allowing all the signatures they gathered to be voided. And that could become an issue as his organization seeks to obtain the 237,645 valid signatures it needs by July 2 to put the title loan measure on the 2018 ballot.

The tactic of issuing subpoenas to disqualify signatures actually worked last year, though it didn’t involve nearly as many subpoenas.

At issue was an initiative to insert a “right-to-know’’ provision in the Arizona Constitution, requiring any group seeking to influence a political race or ballot measure to reveal the identity of anyone who contributed more than $10,000.

Challengers issued subpoenas for 15 circulators, leaving them with a security guard at an office building which had been used by a company that had hired the paid circulators. When none appeared, the judge disqualified the 8,824 signatures they had collected, leaving the petition drive short.

Attorney Kim Demarchi challenged the law in that case in a bid to put the “Outlaw Dark Money’’ measure on the ballot. She argued that a circulator’s signatures should be tossed only when there is a “valid objection’’ to the circulator or the “need for a circulator’s testimony.’’

But Supreme Court Justice John Lopez, writing for the unanimous court, said the constitutional right of people to propose their own laws and constitutional amendments “is, and must be, subject to reasonable regulation.’”

And he said requiring circulators to appear in court – and tossing their signatures if they don’t show – “furthers the constitutional purpose of the initiative process by ensuring the integrity of signature gathering by reasonable means.’’

Gonski, in her new lawsuit, argued to Bolton that the law is unfair and discriminatory. She pointed out that lawmakers decided the requirement to registering paid and out-of-state circulators – and allowing their signatures to be struck if they don’t show up, applies only to ballot measures and not to nominating petitions for political candidates.

“There is no evidence to suggest that initiative petitions are more susceptible to fraud than candidate nomination petitions, nor that paid or out-of-state circulators are in need of special punishment above and beyond other circulators to compel their attendance in court,’’ she wrote.

A spokeswoman for Hobbs, who is the defendant in the case, said her office was reviewing the challenge.

The case presents an interesting situation for Hobbs: She actually voted for the measure when she was a state senator in 2014. In fact, all but two Senate Democrats supported it: Andrea Dalessandro of Green Valley and Robert Meza of Phoenix.